“Every Christmas Story Ever Told (and then some),” December 2 through 12 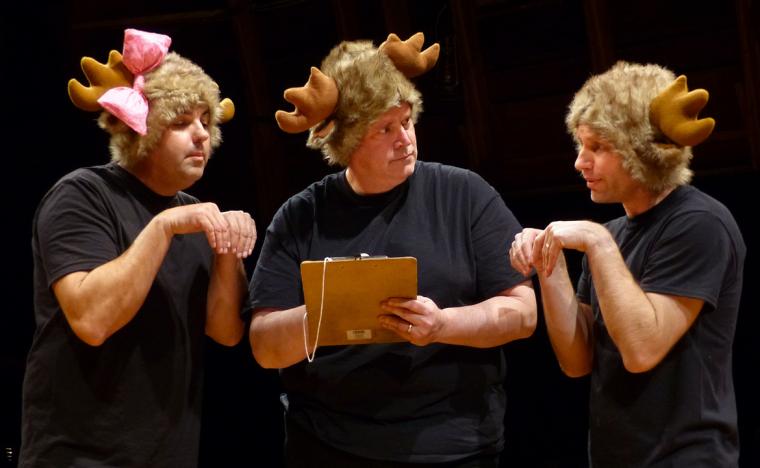 Nathan Johnson, Mike Kelly, and Jonathan Grafft in “Every Christmas Story Ever Told (and then some)" at the Richmond Hill Barn Theatre -- December 2 through 12.

Described by the Orlando Weekly as a slapstick that “accomplishes the small miracle of making all Christmas myths seem both utterly ridiculous and absolutely essential,” the holiday-themed spoof Every Christmas Story Ever Told (and then some) closes the 2021 season for Geneseo's Richmond Hill Barn Theatre, a show lauded by the Sacramento Bee as “a respectful homage and side-splitting parody at the same time.”

The recipe for Every Christmas Story Ever Told (and then some) is deceptively simple: Take a little of Rudolph the Red-Nosed Reindeer, Frosty the Snowman, and How the Grinch Stole Christmas; mix in The Gift of the Magi, A Charlie Brown Christmas, and It's A Wonderful Life; and then add a touch of A Christmas Carol, The Nutcracker, and a few other BHCs (Beloved Holiday Classics). The stage dish that results is a Christmas confection that's a fast, fond, and furious look at the yuletide traditions we all remember, some we never knew, and a few we'd maybe like to forget. A non-stop holiday romp through everyone's favorite traditional Christmas memories, this uproarious comedy by authors John K. Alvarez, Michael Carleton, and James FitzGerald finds a trio of actors cramming an entire season's worth of stories, carols, and television specials into 90 minutes of non-stop laughs – a theatrical experience that The Other Orlando magazine deemed "will have you laughing harder than spiked egg nog."

Directing Every Christmas Story Ever Told (and then some) is Mike Skiles, who previously helmed the Jeff Daniels comedy Escanaba in da Moonlight for Richmond Hill and also appeared in such venue productions as California Suite, Dearly Beloved, and Doublewide, Texas. His wife Jackie Skiles – a performer in such Richmond Hill offerings as Death of a Salesman, Busybody, and the recent Clue: On Stage – serves as the show's stage manager. And the three characters who enact Every Christmas Story Ever Told (and then some) are portrayed by a trio of the Geneseo theatre's most familiar faces and admired talents: Jonathan Grafft (Cheaper by the Dozen, Flowers for Algernon), Nathan Johnson (The Nerd, A Doublewide, Texas Christmas), and Mike Kelly (The 39 Steps, Escanaba in da Moonlight).

Every Christmas Story Ever Told (and then some) runs at the Richmond Hill Barn Theatre December 2 through 12, with performances Thursdays through Saturdays at 7:30 p.m. and Sundays at 3 p.m. Admission is $12, and more information and tickets are available by calling (309)944-2244 and visiting RHPlayers.com.