Everything (Jolly) Old Is New(-ish) Again: “What a Wonderful World,” at the Timber Lake Playhouse through December 12 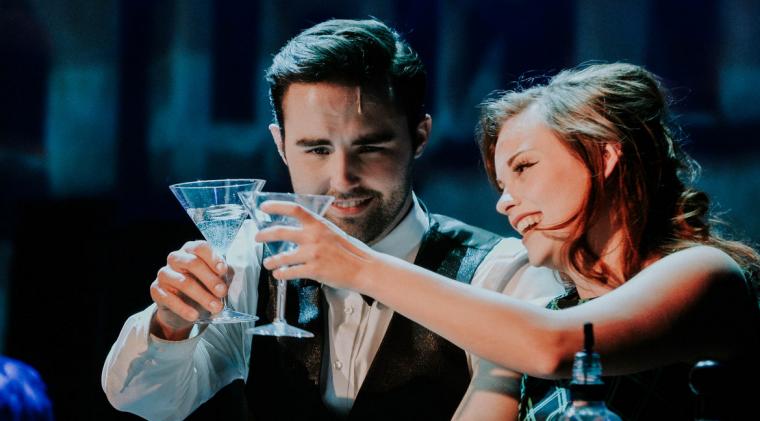 What would happen if Santa Claus decided he no longer wanted the gift-delivering gig? Well, it would be chaotic and disruptive to the millions of children and parents who count on him each year, not to mention some very disappointed elves. The Timber Lake Playhouse’s latest jukebox musical, What a Wonderful World, is the magical tale of how Santa and Mrs. Claus try to retire – but in doing so, they must pass the baton to the new Santa, otherwise the North pole, and the fate of Christmas, are in danger of disappearing forever.

Directed by Paul Stancato, with Stephen Boyer serving as associate director, this story takes place in the New York of 1959 as its characters navigate the ups and downs of replacing Mr. Claus. With an original book by Jeremy Desmon and music arrangements by Jesse Vargas, this is the first time Timber Lake has world-premiered a new musical. And although I thought the cast was talented, the revamping of many of the songs for this show just did not work for me. Songs such as “Breakaway,” as originally sung by Kelly Clarkson, and “It’s the End of the World as We Know It,” by R.E.M., came across a bit corny, overdramatic, and, at times, even obnoxious.

Under the music direction and coordination of Michael McBride and Benjamin Stayner, I felt like some of the arrangements were better than others, and a few of the songs fit the show, including the classic tune “What a Wonderful World” as sung by Louis Armstrong. But as Armstrong’s original is unbeatable, how do you outdo such a fantastic performance? Also, some of the numbers, such as Rachel Platten's “The Fight Song,” just didn't seem fitting for the show's plot. I thought there were too many genres represented in What a Wonderful World, and older, classic songs may have been more appropriate for the 1959 setting.

That being said, there were some enjoyable moments on Saturday evening, with the choreography by Stancato, Felicia Finley, Cate Benioff, and Josh McWhortor interesting and well-executed. There was some tap, Fosse-style, and contemporary dancing throughout the show, which was both energetic and entertaining. Josh Iacovelli's and Sky Aguilar's scenic design, as well as the work of projections designer Alex Gendal, was also unique, with three mobile screens being utilized across the stage as images were projected, among them shelves of books that transform the setting into a library.

Nick Kohn was kind of a laid-back Santa Claus, and co-choreographer Finley transformed herself into a sassy Mrs. Claus who was determined to find a replacement for her beloved husband. Enter Jack Cahill-Lemme as the dapper Jack Chase – a young, New York-based advertising executive- whom they would like to see become the next Santa. Cahill-Lemme was decked out in a black suit with tie and top-hat courtesy of costume designer Terrie Miller. Meanwhile, Jack’s love interest Lucy Wagner, played by Anna Catherine Smith, was my favorite character.

Smith managed to pull off every song she sang with great eloquence and professionalism, especially when she performed the timeless title tune. (Her rendition would've made Louis Armstrong proud, and those are some big shoes to fill.) And even though I didn’t like the arrangement of the “Fight Song,” Smith was able to make it her own. Even her duet with Mrs. Claus wasn’t half bad.

Another performance that really did work particularly well was Mac Myles', who played the other potential replacement for Santa Claus named Topher Kringlemeyer. Myles sang, “Life Is a Highway,” and as the lyrics explained, he was going to ride that highway all night long, as Santa would in his sleigh delivering gifts all night. And Rebecca Larkin, who portrayed the feisty little elf Rhubarb, was cute, but I didn’t envy her at all as she tried to take on the super-fast rant that starts R.E.M.'s “It’s the End of the World as We Know It.” I personally don’t think anybody other than Michael Stipe is qualified to sing that song.

The rest of the ensemble was very talented and really in sync, and the costumes for the elves were also adorable and full of bright colors. The other things I liked about the show were the oversized gift-wrapped presents that were placed on both sides of the stage and the beautiful light decorations that were set up outside the theatre. Saturday night at Timber Lake felt festive and happy. But What a Wonderful World itself was an unsatisfying blend of musical styles, and while I guess I'm just a sucker for traditional Christmas music and stories – and your reaction to this show will certainly be a matter of taste – by the end of the production, I was indeed ready to breakaway.

What a Wonderful World runs at the Timber Lake Playhouse (8215 Black Oak Road, Mt. Carroll IL) through December 12, and more information and tickets are available by calling (815)244-2035 and visiting TimberLakePlayhouse.org.