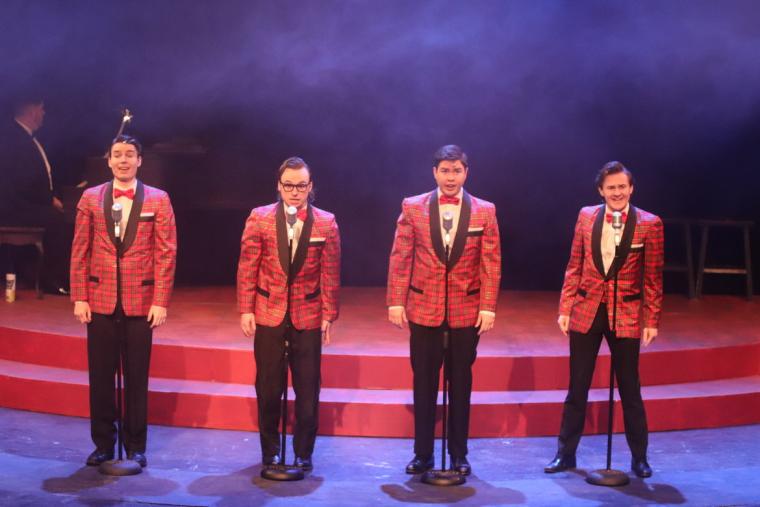 Lauded by the New York Times as a "sweetly enjoyable holiday show" and praised by Broadway World for delivering "toasty, cozy, musical holiday cheer to assist us in appreciating all the good stuff around us," the holiday-themed revue Forever Plaid: Plaid Tidings closes the 2022 season at Mt. Carroll's Timber Lake Playhouse, the show's December 1 through 11 run reuniting audiences with the beloved doo-wop quartet who refuse to let their years-ago deaths get in the way of having a delightful musical-comedy time.

A recently debuting hit that offers the best of Forever Plaid tied-up in a nifty package with a big Christmas bow on top, Plaid Tidings finds the titular, deceased '50s-boys-band quartet of Frankie, Sparky, Smudge, and Jinx back to perform their Christmas special. At first, they aren’t sure why they’ve returned, having been successfully whisked off to the afterlife at the end of Forever Plaid. But a phone call from a heavenly Rosemary Clooney lets them know that they’re needed to put a little harmony into a discordant world, leading to brand-new renditions of such cherished yuletide classics as "Have Yourself A Merry Little Christmas," "Let It Snow," "Carol of the Bells," "I'll Be Home for Christmas," "O Little Town Of Bethlehem," and a cheerful calypso number with the repeated line “in excelsis da-a-ay-o.” And sprinkled among the Christmas offerings are a mass of returning audience favorites from the Plaids' beloved repertoire, including their riotous three-minute-and-11-second version of The Ed Sullivan Show, this time, featuring the Rockettes, the Chipmunks and The Vienna Boys Choir.

With original author Stuart Ross writing the new show's book, as well, and James Raitt, who did the original's vocal and musical arrangements, returning to provide the score, Plaid Tidings is the sequel to the international smash Forever Plaid – a cheeky celebration of close-harmony "guy groups" (e.g. The Four Aces, The Four Freshmen) that reached the height of their popularity during the 1950s. Personifying the clean-cut genre are the Plaids, this quartet of high-school chums' dreams of recording an album ended in death in a collision with a bus filled with Catholic schoolgirls on their way to see the Beatles' American debut on The Ed Sullivan Show, and Forever Plaid opened with the Plaids returning from the afterlife for one final chance at musical glory. Included among their timeless repertoire are nearly two dozen favorite standards from the area, including "Three Coins in the Fountain," "Undecided," "Gotta Be This or That," "Moments to Remember," "Crazy 'Bout Ya, Baby," "Sixteen Tons," "Heart and Soul," "Lady of Spain," and "Love is a Many-Splendored Thing."

Forever Plaid: Plaid Tidings runs at the Mt. Carroll theatre December 1 through 11 with scheduled performances at 7:30 p.m. and 2 p.m. Tuesdays through Sundays, admission is $35, and more information and tickets are available by calling (815)244-2035 and visiting TimberLakePlayhouse.org.