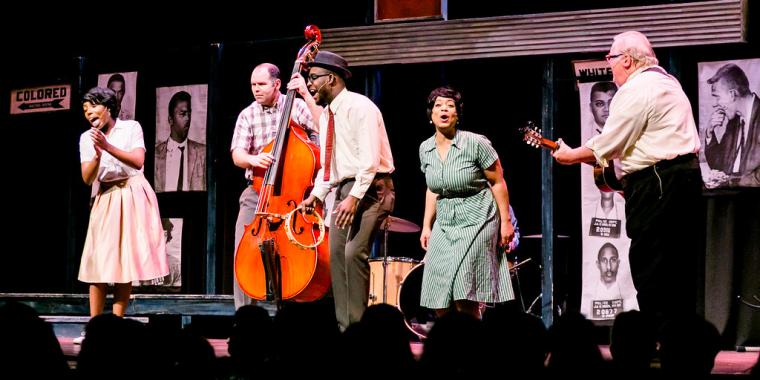 “Freedom Riders" at the University of Dubuque -- January 31.

An exploration of the valiant and courageous personalities behind one of the most critical chapters in the history of the Civil Rights movement, Mad River Theater Works' Freedom Riders will enjoy a special January 31 staging at the University of Dubuque's Heritage Center, the play delivering unforgettable heroes and facts essential to a full understanding of the Civil Rights era and American history.

The latest addition to the canon of American-history plays produced by Mad River, Freedom Riders demonstrates the importance of working together to affect change, and specifically how non-violent protest was used to combat the cruelties of segregation. Set in 1961, 15 years after the United States Supreme Court outlawed segregation, bus lines and cities throughout the south still enforced a rigid system of separating black and white citizens. The Freedom Riders, a group composed of Americans both black and white, decided to travel together on buses that crossed state lines, purposefully disregarding the hateful segregation practices that will still commonplace in so many parts of the United States. In highlighting the effects of these Civil Rights heroes, Freedom Riders gives audiences a uniquely personal understanding of a movement, and stands alongside such other Mad River testaments to courage and the fight for change as Walk On: The Rosa Parks Story, John Henry, and Everybody's Hero: The Jackie Robinson Story.

Based in Zanesfield, Ohio, Mad River Theater Works is an acclaimed touring ensemble that creates vibrant and evocative plays with music for families and young audiences based on American history and folklore. Founded in 1978, Mad River presents original productions that explore traditional stories and themes in a unique, innovative style, and the company's mission is to create and perform inspiring stage productions that uplift characters from the past and challenge notions of racism, sexism, and intolerance. In addition to local and national touring presentations, Mad River's company members also conduct hands-on residencies in schools that connect students to American roots storytelling and music that serves as the source material for its work.

Freedom Riders will be staged at the University of Dubuque's Heritage Center on January 31, admission to the 7:30 p.m. production begins at $11, and more information and tickets are available by calling (563)585-7469 and visiting Dbq.edu/heritagecenter.