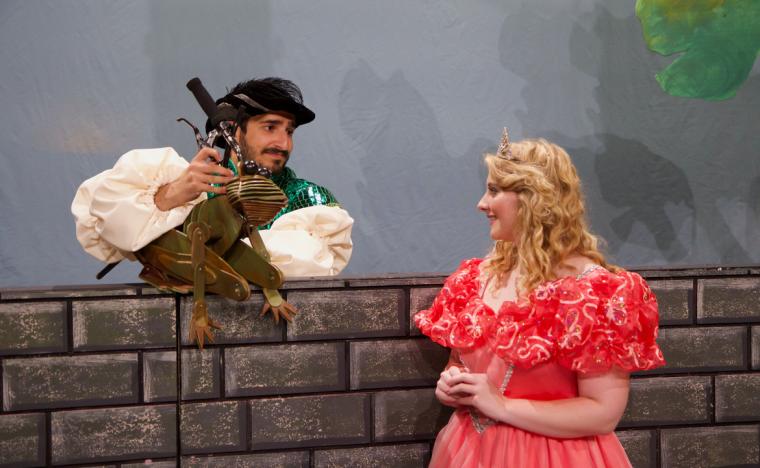 Rami Halabi and Katie Kleve in The Frog & the Princess at Augustana College -- September 15 and 16.

Augustana College will start its 2018-19 theatre season off with a bang – and a “Ribbit!” – via its September 15 and 16 presentation The Frog & the Princess, a family comedy featuring classic storytelling, untraditional romance, and hilarious one-liners, and adapted by Brandon Roberts from the Brothers Grimm fairytale.

Once upon a time, in the Kingdom of Stonewell, there lived a beautiful princess named Calliope. At one time a beautiful and magical kingdom admired by everyone, Stonewell has fallen into despair since Princess Calliope’s royal father became ill and the Step-Queen Corvidae began her rule. Enter Prince Gerwyn, the handsome suitor from the Kingdom of Hopspond, who meets and instantly falls in love with the beautiful and kind Calliope. After asking for her hand in marriage, Gerwyn is told by Calliope that he will have to ask the Step-Queen's permission – but it’s not going to be easy, because in order to ensure her “rightful” place on the throne, Corvidae has transformed all of Calliope’s pervious suitors into animals. Gerwyn proves to be no exception, and with her magical golden ball, the Step-Queen casts a spell that turns Gerwyn into a slimy frog forever ...unless he can get a kiss from his true love. Augustana's annual children's-theatre offering consequently asks: Will Gerwyn and his princess live hop-ily ever after?

Directing The Frog & the Princess is Augustana alumna Jackie Wynes McCall, whose previous family entertainments for the college have included Pinocchio Commedia and Aesop's (Oh So Slightly) Updated Fables. The cast features Augustana actors Rami Halabi (The Drowsy Chaperone), Katie Kleve (Othello), Aubrey Lyon (Agnes of God), and first-year student Rebecca McNamar. And as McCall states, “This year, the show will incorporate puppets and interaction, so families who may have heard the tale before will now get to be part of it.”