Girl Meets Boy Meets Girl-Meets-Boy: “As You Like It,” at the QC Theatre Workshop through December 17 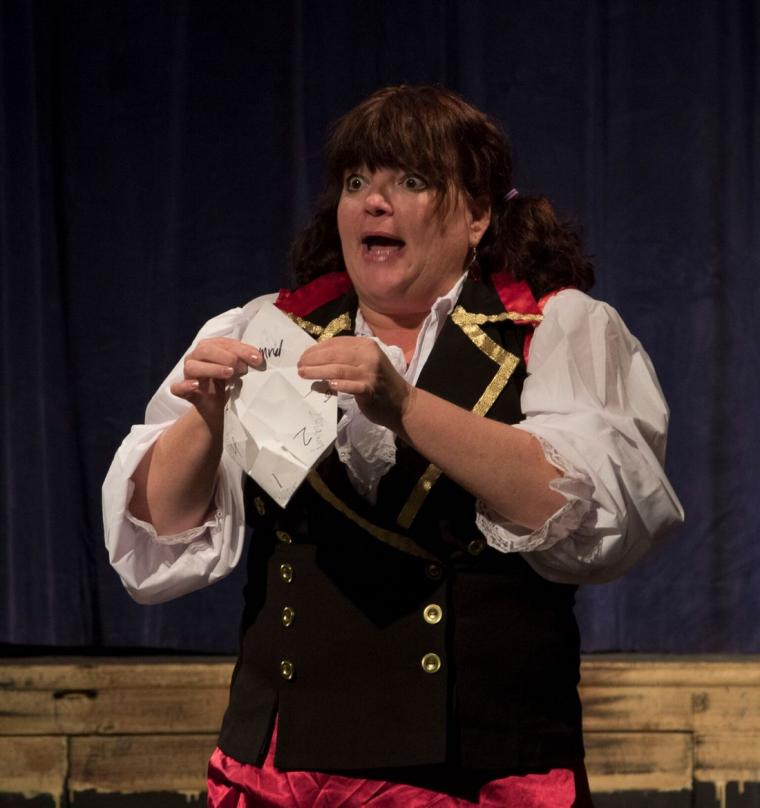 The Prenzie Players' As You Like It starts out in true Prenzie form, with short vignettes taking place before the show actually begins. The first person we see is Denise Yoder as Touchstone, the fool of William Shakespeare's comedy, and as she performs some funny bits involving origami and audience interaction, Yoder's opening scenes seem mostly improvised. I will say, though, that during the December 8 preview, there was a lot more going on during this prelude, with a guitarist playing off to the side, and different music playing in the background over the dialogue – it was almost too much, and hard to hear what was being said. But once we actually got to the script, director Kitty Israel's production was off and running.

Shakespeare's play centers mostly around Rosalind (Liz Ann Terry) and Orlando (Payton Brasher), who find themselves in a forest after fleeing the kingdom where Rosalind was banished, and Orlando was threatened with prosecution by his older brother Oliver (Mischa Hooker). Rosalind and Orlando essentially fall in love-at-first-sight before their banishment, and prior to their travels, Rosalind and her sister Celia (Mattie Gelaude) assume disguises so they're not recognized. Rosalind, for her part, disguises herself as a man – which is all well and good until she runs into Orlando. The weight of As You Like It falls greatly on Terry, who carries this production with splendid ease. In the two times I've seen Terry perform (previously in the Prenzies' The Revenger's Tragedy), I've been blown away by her great command of classical-theatre language, and in this particular performance, she displays razor-sharp comedic timing and an interpretive style that really brings life to the whole evening. Brasher’s lovestruck Orlando, meanwhile, was tender and a joy to watch – especially in his playing opposite Terry when under the impression that Rosalind was a man. Brasher’s reaction to Rosalind's practicing of a kiss was a particularly enjoyable moment that Thursday's audience couldn’t get enough of, and making it even funnier was Justin Hager's forest musician Sven delivering a deadpan “First time?” after Orlando kissed this “man” – clearly not a line Shakespeare wrote.

I did notice quite a few modern-day lines thrown into the show, as when Yoder's origami dragon made reference to Game of Thrones. (While Shakespeare was ahead of his time, I don’t think “Khaleesi” was a name being thrown around a lot back then.) I could understand why some people, particularly Shakespare purists, might frown upon this. However, given the modern dress and somewhat unspecific time period, it did not bother me, and in truth, allowed for even more moments of humor in this comedy.

Gelaude's Celia delivered some engaging speeches, and, when partnered with Terry, contributed some very captivating scene work. Victoria House was also impressive as the elderly servant to Orlando, her character's slow-moving walks across the stage stealing my attention every time. Lis Athas and Jesse Mohr share some quite-touching scenes as Phoebe and Silvius, the former writing the latter off for his conversing with another woman, and promptly falling for a new “man” in the disguised Rosalind. And Prenzie veterans Andy Curtiss and Tracy Skaggs deliver solid performances as well, with Curtiss pulling double-duty as Duke Frederick and Duke Senior, and Skaggs portraying the melancholy Jaques. Skaggs performs what is perhaps one of Shakepeare’s top-two most famous soliloquies – the one beginning with “All the world's a stage ...” – and while some may have used it as a means to show off their big “Ac-ting!” moment, he delivers it instead with subdued grace and professionalism.

There's also a phenomenal boxing scene that had incredibly believable fight choreography (performed by Brasher and fight choreographer Aaron E. Sullivan), and overall, director Israel makes most interesting use of her space in what I would call not “theatre in the round,” but more “theatre in the diamond”. She has staged As You Like It, however, in such a way that I never felt like I missed any of the action. Israel has really put together a great production here with a fantastically strong cast, one in which all players – Prenzie and patron alike – can enjoy.

As You Like It runs at the QC Theatre Workshop (1730 Wilkes Avenue, Davenport) through December 17, and more information and tickets are available by calling (563)484-4210 or visiting PrenziePlayers.com.