Because They're Goin' to the Chapel and She's Gonna Get Married: "Mama Won't Fly," at the Circa '21 Dinner Playhouse through November 3 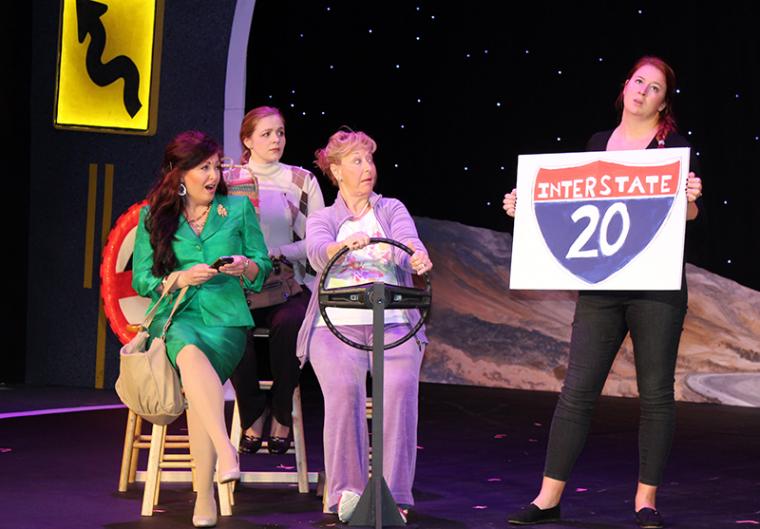 There was a certain air of rowdiness at the Circa '21 Dinner Playhouse's opening-night production of Mama Won't Fly, and rightfully so, as the champagne fountain was flowing in celebration of the theatre's final production of its 41st season. Everyone seemed ready for a good laugh, and on those terms, I don't think any of us left disappointed.

This Jessie Jones/Nicholas Hope/Jamie Wooten comedy is a Southern-fried, dysfunctional-family road trip from Hell, complete with a runaway ball of bras, a homicidal family reunion, and a Vegas-wedding-chapel brawl/ But it all starts simply enough. Savannah Honeycutt (Miranda Jane) has promised her brother that she'll accompany their mother Norleen Sprunt (Kay Francis) on a flight from Birmingham, Alabama to Santa Monica, California in time to attend his wedding in four days. The only problem is – you guessed it – Mama Won't Fly. And in director Warner Crocker's production, Francis and Jane play off each other like they've been bickering for decades, reminding me (not always pleasantly) of some conversations in my own family over the years. 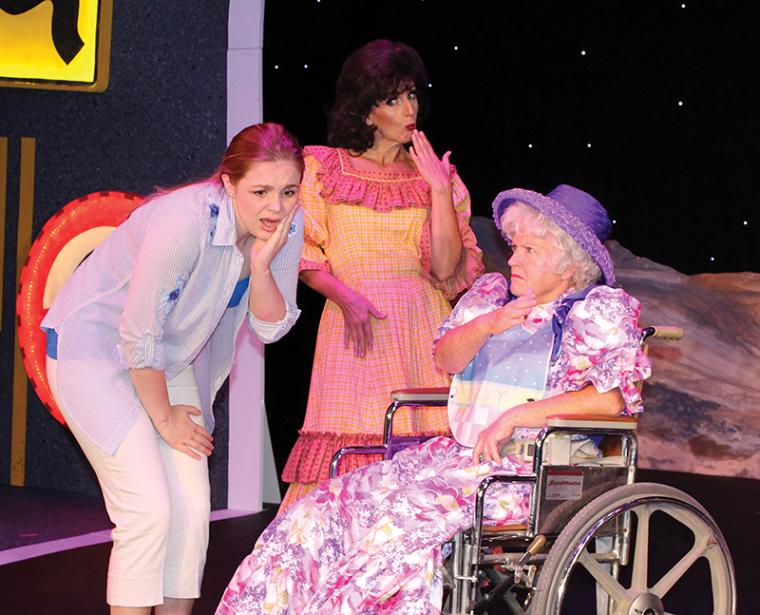 To complicate matters, the bride-to-be Haley Quinn (Kimberly Camacho) shows up as a surprise to join them on the trip, presumably so they can all get to know each other. Camacho's Haley is filled with the wide-eyed gawkiness you'd expect from a young woman trying to make a good impression on her future mother-in-law, but it turns out there's trouble even before the aging Buick leaves the driveway. While each passenger is taking their final bathroom break before embarking, Savannah warns Haley not to reveal anything about herself to Mama because “she's nosy and she meddles,” and Savannah, we learn, blames her mother for the disappearance of her first true love, Spud Farley. After two failed marriages, Savannah has vowed to locate him during the road trip, and rekindle their romance.

The ladies' first stop is the American Museum of Foundation Garments, where the proprietor (Autumn O'Ryan) cheerfully models the museum's various exhibits on the outside of her dress. Then there's the all-important stop at the Grubbs family reunion along the back roads of Texas, where Haley gets to meet her future relatives in their natural habitat: a barbecue. There's a pride in her voice as Norleen explains to Haley, “Most people hide their eccentrics, but this is Texas – we haul out the nuts for everyone to see!” Two of those nuts are Cousin Chicken (Tom Walljasper), a rubber-legged widower celebrating his 35th wedding anniversary while carrying his wife's ashes in an oversize mayonnaise jar, and Uncle Ferd (Don Denton), who dances like he's just been let out of a lunatic asylum. (Hint, hint.) 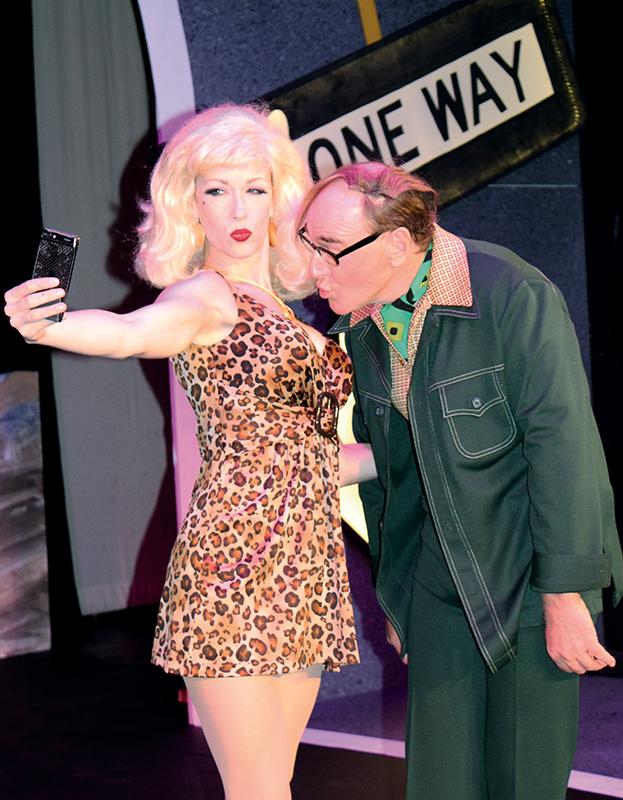 Mama Won't Fly goes on to involve Savannah, Norleen, and Haley in numerous vehicle changes, hijackings, mishaps, and a reintroduction to Savannah's long-lost love, Spud. But while the three leads each did a marvelous job throughout, my favorite parts of the September 21 performance revolved around the ensemble members who played numerous roles through the course of the evening. Whether is was Erin Churchill's Vegas gold-digger with her cell phone tucked in her bra, Autumn O'Ryan's jilted wife, or Deb Kennedy's drunk community-theatre costumer, all did outstanding jobs of elevating a lackluster script into a thoroughly enjoyable experience. Denton also had plenty of opportunities to shine, and his caffeine-crazed truck driver had me squirming in my seat. But the performer who got the biggest laughs during Friday's performance was Walljasper, who all but radiates joy in every scene he's in. It's almost impossible not to smile when you're watching someone having this much fun.

Scenic designer Jeff Weber and lighting designer Mike Turczynski combine their creative talents with an archway consisting of backlit road signs that not only allows for a more intimate setting than Circa '21's productions usually allow, but help serve as guides, letting the audience know where they are in their journey. And director Crocker is to be commended for a fast-paced production that still gives the audience time to enjoy the laughs; even the scene changes were carried out with energy and enthusiasm. So if you're looking for some good-natured, family-friendly fun, Mama Won't Fly ... but she will make you laugh.

Mama Won't Fly runs at the Circa '21 Dinner Playhouse (1828 Third Avenue, Rock Island) through November 3, and more information and tickets are available by calling (309)786-7733 extension 2 or visiting Circa21.com.