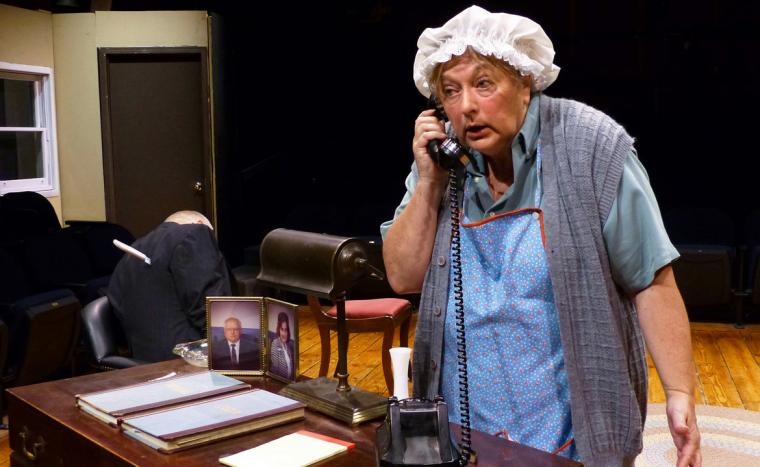 A disappearing body, missing evidence, blood on a chair, and a pursuing investigation – so goes the spirited comedy BusyBody, written by Jack Popplewell and directed by Joe DePauw. Sunday’s matinée performance at the Richmond Hill Barn Theatre was rife with lively slapstick and subtle humor, taking us into the world of Mrs. Piper (Jackie Skiles), a spunky office cleaning lady who has stumbled her way into a murder mystery.

Set in the London office of Richard Marshall (Jim Strauss), Busybody finds Piper discovering a dead body late one evening while cleaning. She quickly calls in the authorities – Detective Superintendent Baxter (Joe LoGiudice) and Detective Constable Goddard (Gregory O’Neill), who immediately begin to search for clues. Detective Baxter, however, is deathly ill, and also greatly aggravated after rousing himself out of bed only to find that the corpse has vanished. And while I personally find it hard to relate to this type of jesting, farcical humor, it seemed to be a big hit with the rest of Sunday's audience.

Skiles speaks in a Cockney accent, and the other cast members also employ English dialects – except for Strauss, which was a bit confusing. Speaking from experience, I know that accents of these sorts can be tricky, but I still found myself slightly distracted by some of the supporting actors’ inability to pull off their dialects. Skiles, however, appeared to be a seasoned actress, and was able to talk in a very believable, conversational way that was both understandable and authentic. Her character had endless lines of dialogue that she smoothly delivered while revealing her intricate and hilarious investigative techniques. 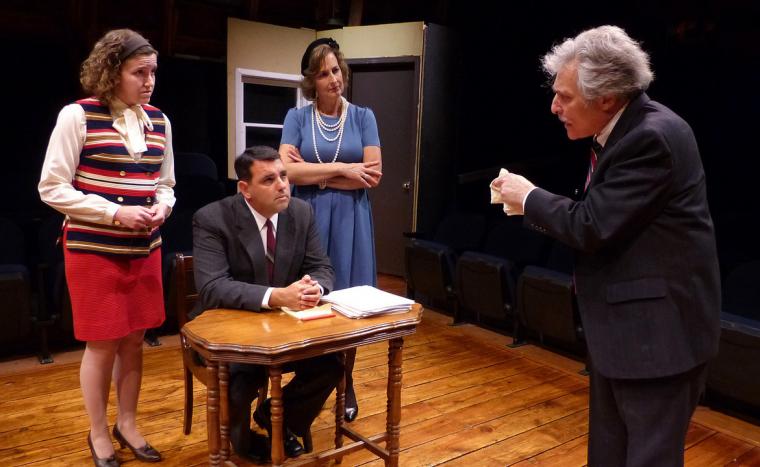 Detective Baxter and Mrs. Piper have quite a tumultuous relationship from the start, one that leads to a lot of sarcasm and wisecracks. LoGiudice was very animated and demonstrative in his performance while reminding me of Albert Einstein in appearance, but at times his line deliveries crossed over into abject shouting. Overall, though, he played Baxter as an intelligent investigator, and at times I felt like I was in a courtroom watching a cross-examination of witnesses.

In his likable role as Detective Goddard, O'Neill lent a charming ease to his delightful performance, and in my opinion, he had one of the best English accents in the whole show. Another notable portrayal was Suzanne Rakestraw's as Claire Marshall, the finicky and somewhat deceptive wife of Richard who admits to having an affair. Rakestraw was convincing in her role as this coy and elegant woman who you never fully trust. Robert Westerby (Nathan Johnson) is the accountant to Mr. Marshall, and in one particularly funny scene, he gets into a scuffle with Mrs. Piper, who ends up roughing him up quite a bit. The physicality was excellent as she tosses a small trash can over his head and wraps him up in a carpet.

As Vickie Reynolds, a secretary in Marshall’s office, Mallory Park demonstrated a great, bubbly stage presence. Park’s personality really shined through in her performance, and best of all, she unleashed a fantastic jovial laugh on Sunday that was one of the best I've ever heard in a play; it came across as so completely genuine that I found myself laughing right along with her. Unfortunately, the show's other private secretary, Marian Selby, seemed to be upset for most of Busybody's length, and this resulted in a continually sullen expression on portrayer Elizabeth Shaffer's face. 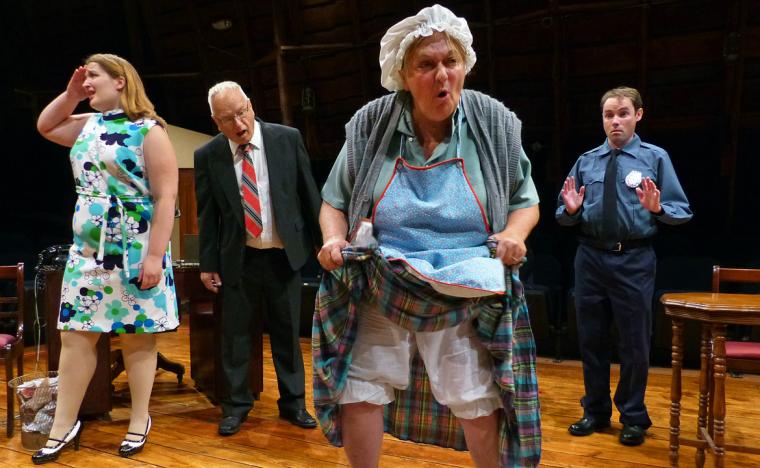 On the technical side, the lighting and sound design by Jennifer Kingry were spot-on, with the turning on of a single desk lamp starting the play in clever fashion. All throughout the show, lights are turned off and the action continues in the dark accompanied by great sound effects such as creaky doors and knocked-about chairs. All four corners of the theatre space, meanwhile, were utilized with doors, cupboards, and windows that were close to the audience's seats, which made for a more interactive experience. Set builder Mike Skiles and set designer Mollie Schmelzer deserve accolades for a very nice utilization of space.

Judging by the frequent laughter from the patrons attending Busybody, I would say the production was a hit. It wasn’t exactly my personal cup of tea, but nonetheless, clearly the patrons at Sunday’s matinée thoroughly enjoyed their afternoon.

Busybody runs at the Richmond Hill Barn Theatre (600 Robinson Drive, Geneseo) through July 22, and more information and tickets are available by calling (309)944-2244 or visiting RHPlayers.com.