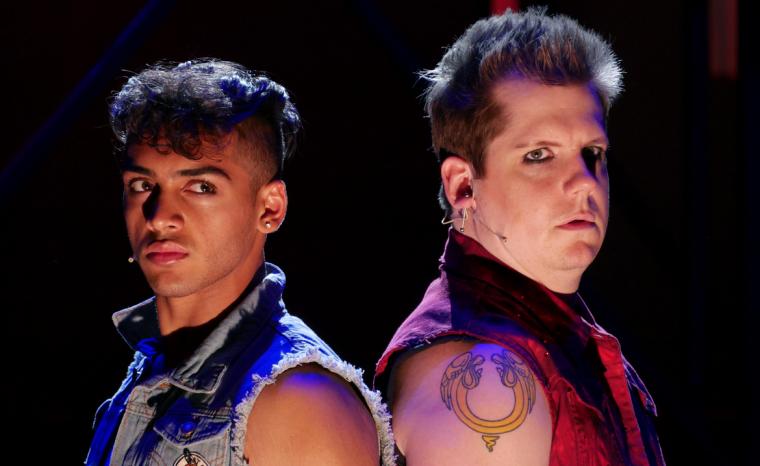 If memory serves, I've seen three different versions of Jesus Christ Superstar at area theatres in the last three years. And I have to say that the Timber Lake Playhouse’s current presentation of this show is one of the most unique and interesting I've seen to date. Sunday’s matinée performance of director Paul Stancato’s rock musical was stunning, and I thoroughly enjoyed it. Including its music direction by Michael McBride and Stancato's and associate Felicia Finley’s choreography, this outstanding production brought a brand-new, never-before-seen concept to this powerful musical. It really made me think about the story I was witnessing in a very contemporary, creative way.

The show's thrilling music by Andrew Lloyd Webber and lyrics by Tim Rice take us through the last seven days of Jesus’ life as told through the eyes of Judas Iscariot, and Caleb Mathura’s portrayal of Jesus was absolutely beautiful – one of the best I've ever seen. His falsetto was extraordinary, with a piercing quality that was so appropriate for his role, and Mathura had expressive eyes and facial expressions that made you feel his every emotion.

As Judas, Roy Brown was solid and had a strong voice, yet I just didn't get his take on the character. In fairness, maybe it was just so different from what I'm used to that I was stuck comparing him to other actors I've seen play this part. But while he did a respectable job, I wasn't feeling enough intensity or emotion from him; it was like Brown was spending so much time thinking about his lyrics, or something, that he wasn't quite able to fully develop his character’s personality.

Nissi Shalome, who played Mary Magdalene, was gorgeous, and she and Mathura complimented each other well. The graceful Shalome also gave a poignant solo performance of “I Don’t’ Know How to Love Him,” coming across as a mature and seasoned performer, and the actress wore a lovely yellow blouse, by costume designer Damarius Kennedy, with a bell sleeve that flowed beautifully. As for the rest of the cast members' costumes, Kennedy had them wearing different styles of jeans with jean vests, scarfs, headbands, and, for the women, long skirts or shorts that had a total hippie vibe. At one point, two of the male actors also donned fedoras, and several of the jean vests and jackets sported the Jesus Christ Superstar logo with its two-winged angels on the back.

Joey LaPlant did a terrific job as the nefarious Caiaphas, boasting an extremely low bass voice that was surreal, and wore six-inch-heeled platform boots that he impressively navigated throughout the show’s entirety. His sidekick Annas, played by Eli Nash, was equally wicked, decked out in high-heeled black boots and a spiked arm bracelet.

Interestingly, Autumn Key was cast as King Herod, and having never seen a female play this role, I have to say she brought a new dimension to this character with her feisty dance moves and sassy personality. She, too, had an outfit that was eye-popping, a costume that found half of one leg covered with a lacy stocking and the other leg dressed in a peach Lycra (or leather) pant. Key also wore a flashy, silver-studded bra that reflected the lights nicely.

Meanwhile, John Burkland's lighting design was fabulous – especially the spotlights, which looked like a divine glow coming from heaven that enveloped individual actors as they sang. The color of the lights frequently changed, too, as the mood of each scene shifted and, at times, different patterns blinked on the floor.

Matt McClure's set design was equally eye-catching, with graffitied walls on each side of the stage, a high-rise platform with stairs on each end, and a fenced-in balcony. Timber Lake’s rotating stage added another dimension to the scenic design, and the performers were constantly moving about while the stage shifted, which must have required a lot of balance and concentration on the actors' part, especially for those wearing high-heeled boots or shoes. There were also highway lines painted on the floor, with construction barricades in the background and yellow caution tape attached to parts of the fencing – the same fencing used to handcuff Jesus prior to his crucifixion.

Like I said, this rendering of Jesus Christ Superstar was unique and unusual in its presentation, and the creative Stancato did a great job in his interpretation of events. At one point, Jesus even fell backward from the balcony – about a six-foot drop or more – and Mathura's fellow cast members caught him. That must have taken a lot of trust on the actor's part, and there were other equally impressive stunts and fight scenes, as well. While the entire production flowed from scene to scene effortlessly, there was also a lot to look at.

Timber Lake Playhouse’s interpretation of Jesus Christ Superstar was not exactly what I expected. But it was quite entertaining, and with its fresh concept, I found myself further contemplating how the modern world views this dramatic story of Christ and his apostles.