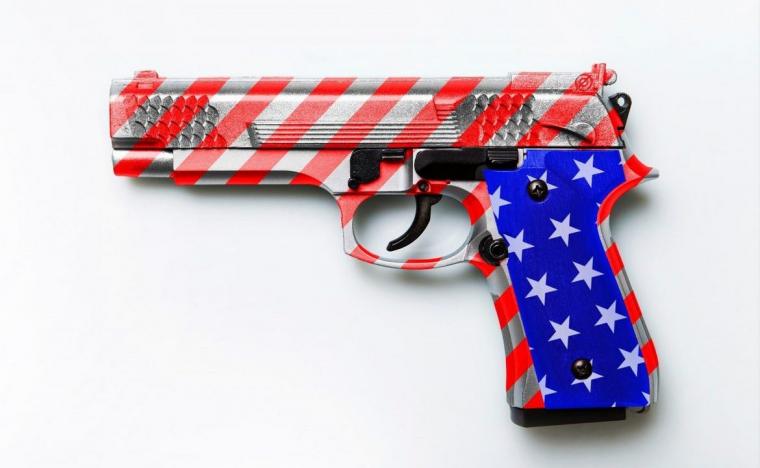 Described by the Bay Area Guardian as “inspired and stimulating,” and by the Des Moines Register as a work that “strikes deep into the bones,” author Frank Higgins' evocative Gunplay serves as the fall theatre production at Scott Community College November 21 through 24, its messages so impactful that portions of the play were read on Capitol Hill prior to Congress passing the handgun-violence prevention act known as the Brady Bill.

A unique theatre piece produced by educational and professional theatres nationwide, Higgins' Gunplay is a kaleidoscope of scenes about guns in American life. Overall, Higgins' work does not take an anti-gun or pro-gun position. Rather, it bombards the audience with a variety of viewpoints that reflect the complexity of positions toward guns in America, with scenes based on history, contemporary incidents, and interviews. Higgins' play was originally written as a piece commissioned by Iowa City's Riverside Theatre in response to a 1991 shooting on the University of Iowa campus. In that tragic event, a former graduate student killed four faculty members and one student, leaving another paralyzed before the shooter took his own life. Yet despite the tragic inspiration for the piece, Higgins explained to the Kansas City Star that Gunplay wasn't a one-note screed. “It has scenes that can be clearly regarded as anti-gun,” said Higgins, “and other scenes that can clearly be regarded as pro-gun. But there is no group that doesn’t have its belief system challenged.”

Scott Community College's production of Gunplay will be staged in the college's Black Box Theatre (Room #228 through Door #2) November 21 through 24, with performances Thursday through Saturday at 7:30 p.m. and Sunday at 2:30 p.m. Admission is $8 at the door, and more information and tickets are available by calling (563)441-4339.