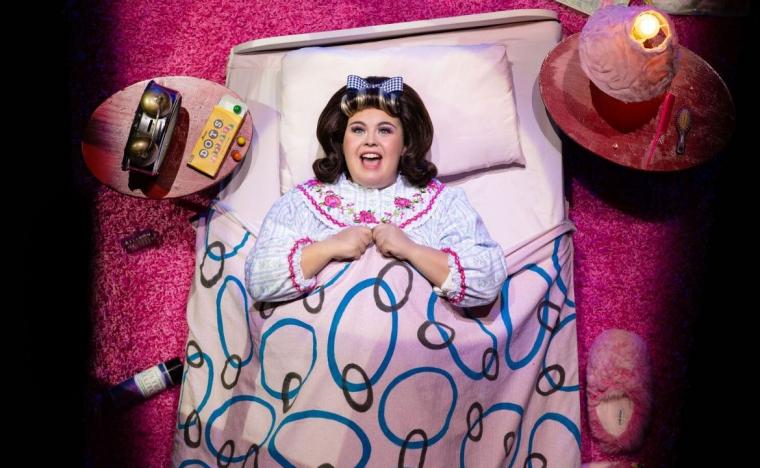 Niki Metcalf in “Hairspray" at the Adler Theatre -- January 31.

Lauded by the New York Times as a "fresh, winning, and deliriously tuneful" musical that's "as sweet as a show can be without promoting tooth decay," the Tony-winning Broadway sensational Hairspray makes a national-tour stop at Davenport's Adler Theatre on January 31, this stage sensational also praised by Variety magazine as a "sweet, infinitely spirited, bubblegum-flavored confection" that "more than lives up to its promise."

As this stage version of John Waters'1988 film comedy begins, it’s 1962 in Baltimore, Maryland, and quirky, plus-sized teenager Tracy Turnblad has one dream: to dance on The Corny Collins Show. When she gets put in detention with the African-American students in the school, they teach her some of their dance moves, and her fearless groove wins her a spot on Corny’s program. Overnight, Tracy transforms from a nobody into a star, and uses her newfound influence to advocate for racial integration. Hairspray's heroine, however, faces scrutiny and bullying from the network producer Velma and her popular yet vicious daughter Amber. With the help of the teenage heartthrob Link and record-shop owner Motormouth Maybelle, Tracy must overcome the odds in order to succeed in her mission to integrate The Corny Collins Show, and her journey results in a bright, energetic story as the teen reminds us to look past the color of one’s skin and fight for every human being’s equal rights.

With its music by Marc Shaiman and lyrics by Marc Shaiman and Scott Wittman and its book by Mark O'Donnell and Thomas Meehan, Hairspray boasts a number of show tunes that have become recognizable staples of musical theatre, among them Good Morning, Baltimore,” “The Nices Kids in Town,” “Welcome to the '60s,” “Mama, I'm a Big Girl Now,” and the peppy dance classic “You Can't Stop the Beat.”

The musical opened in Seattle in 2002 and moved to Broadway later that year. In 2003, Hairspray won eight Tony Awards, including one for Best Musical, out of 13 nominations, and went on to run for 2,642 performances, finally closing in January of 2009. Over the years, this stage success has enjoyed national tours, a 2007 film version starring John Travolta and Michelle Pfeiffer, and a West End production that was nominated for a record-setting 11 Laurence Olivier Awards and won four, including Best New Musical. For its current national tour, the show reunites Hairspray's original, Tony-winning director Jack O'Brien and Tony-nominated choreographer Jerry Mitchell, with its cast including Andrew Levitt (a.k.a. Nina West from RuPaul’s Drag Race) as Tracy's mother Edna Turnblad, Niki Metcalf as Tracy, and Sandie Lee as Motormouth Maybelle.