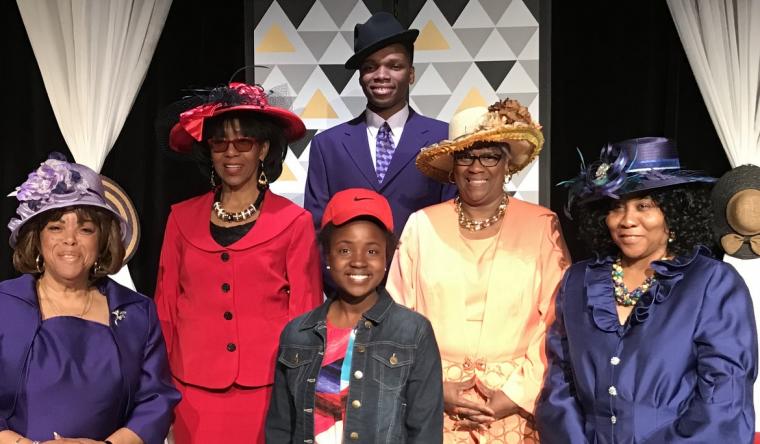 This past Friday, on a lovely spring night, we had church over at the Black Box Theatre. Powerful, soulful, and believable, the April 27 performance of Crowns: A Gospel Musical was also both entertaining and engaging – a truly spiritual experience that left me with goosebumps and a better understanding of African-American head adornments.

“Hattitude” is what a woman must possess to wear a hat well, and the ladies of Crowns do just that. Amari Antoinette Harris portrays Yolanda, a young black woman straight out of Brooklyn, New York, who relocates to Darlington, South Carolina, after her brother Teddy is shot at the tender age of 18. Under the watchful eye of her grandma Mother Shaw, played by Geraldine Sumrall, Yolanda begins her new life with a sisterhood of hat queens – four strong women who share with us their life stories of both tragedy and triumph. (A “hat queen,” we're told, is an African-American woman who owns more than 100 hats and wears them proudly to church.) Crowns consequently finds Yolanda reflecting on her former life in New York and the tragedy that befell her brother, and throughout the show, we see how the young woman tries to identify with her new mentors, underscoring the musical's theme of appreciation for introducing one’s culture to a younger generation.

Author Regina Taylor's story is adapted from the book (by Michael Cunningham and Craig Marberry) that takes us through the lives of each hat queen one by one, and their tales highlight lives of style, within the church tradition, in which the women crown their heads with bright, colorful hats. Crowns' cast members share with us the joys and sorrows behind those head coverings while praising God in word and song, and we also learn about the different styles and ways to properly wear decorative hats that are part of African heritage, worn with much care and dignity.

Velma, played by Cynthia Johnson, has known hard times growing up and working on a tobacco farm, and we learn that on especially hot days, women would tie bandanas around their heads in creative ways that inspired fashionable looks. The charming Johnson has powerful stage presence and charisma that really commands your attention. Mother Shaw, meanwhile, is a national prayer warrior and spirit-filled believer who ushers in the Holy Ghost with her incredible vocal gifts and soulful delivery, and Sumrall delivers an incredibly profound gospel performance with such songs as “In the Morning When I Rise,” “Oh When the Saints Go Marching In,” and “Take Me to the Water.”

Bonnie Jacobs portrays Jeanette, a lovable lady whose flirtatious ways and tales of her hat-wearing days capture your heart. Mabel, played by Loredia Dixon, is a hat queen who obeys all the rules, as expressed by the performer's dignified mannerisms and ladylike ways. These four characters, and the women who played them, really collaborated well together and supported one another at every possible opportunity, and while Harris needs a little fine-tuning in regard to her vocals, she does a good job of delivering her lines in a poetic spoken-word style.

The musical's lone man – a character named “Man” – is portrayed by Anania Jay Michael Collins Williams, whom we primarily see as the production's pastor. Williams is a young actor with plenty of potential but a soft voice, and at times on Friday, it was a little hard to hear him. What I did hear, though, I loved. (In general, the whole show's sound, on Friday, could have used a few adjustments, particularly on the high instrumental volume, excess bass, and under-amplification of the actors’ microphones.)

Director Lora Adams succeeded in bringing the audience hope and comfort with this uplifting story beginning with its opening number – a beautiful cultural dance by African dancer Luann Sisk. And Crowns' gospel-music choices were truly inspiring and brought me peace throughout the show, with music director Cynthia Westbrook Bryson doing a particularly outstanding job with traditional hymns such as “His Eye Is on the Sparrow” and “We’re Marching to Zion.” As for the costumes, there were colorful dresses and pantsuits in shades of royal blue, red, peach, and purple created by Adams and sewn by Candace Eastman, with the decorative hat designs by Susan Snider flashy but, at the same time, extremely dignified.

I found myself rocking back and forth in my seat as I swayed to songs that simply soothed my soul. Crowns: A Gospel Musical is a breath of fresh air, as well as a wonderful gospel-musical experience.

Crowns: A Gospel Musical runs at the Black Box Theatre (1623 Fifth Avenue) through May 6, and more information and tickets are available by calling (563)284-2350 or visiting TheBlackBoxTheatre.com.