Here Comes the Son: "Buried Child," at the QC Theatre Workshop through October 29 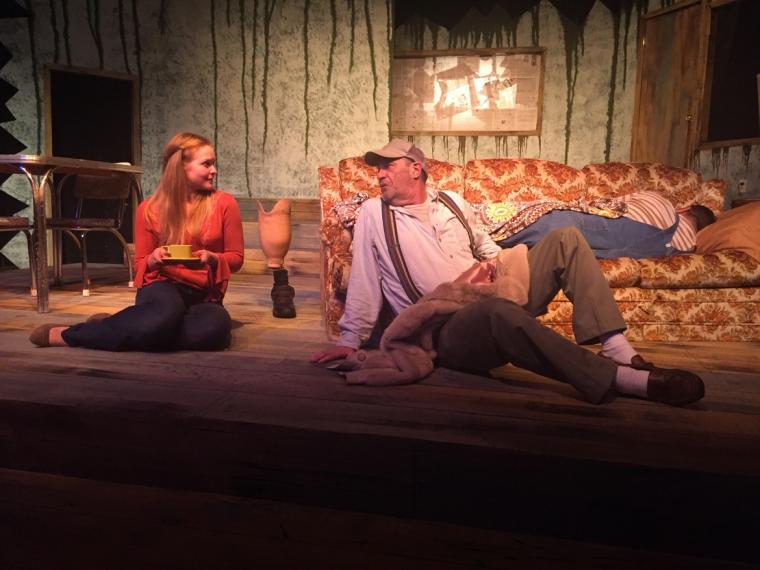 One thing I love about QC Theatre Workshop productions is that from the moment you walk into the building, you’re not walking into a converted gymnasium – you're walking into a specific space in which the story you're about to see takes place. I've previously participated in a couple of QCTW shows, one of them a Sam Shepard play, and can say that the company did a fantastic job of re-creating its space for the October 14 performance of Shepard's Buried Child. Scenic designer Matt Elliott and painter Emma Brutman have created a set that creeps you out from the moment you step foot into the playing area. The moldy walls appear to be crying, bleeding, or both, and the mold ends in jagged, sharp edges that look like bite marks, giving the whole set a sense of decomposition that fits this play perfectly.

Buried Child brings us into the living room of a family that's similarly deteriorating. Real-life married couple Pat and Patti Flaherty play husband and wife Dodge and Hallie. Dodge’s health is on a steady decline, while Hallie rambles on as if talking to herself and enjoys the arms of local man of God, Father Dewis (Andy Curtiss). Meanwhile, Dodge's and Hallie’s sons Tilden (Reader employee Mike Schulz) and Bradley (Brant Peitersen) are their own breeds of “special”; Tilden may be suffering from a head injury that’s never discussed, while Bradley is missing a leg and is just generally creepy.

And when Tilden’s son Vince (Josh Pride) and his girlfriend Shelly (Abby Van Gerpen) show up, the house is sent into wild confusion as to who these visitors are. (There's talk of a child that was buried, but you don’t get the full story until the end of the show.) Buried Child is assembled like a perfect suspense thriller – slowly giving you pieces of its puzzle, and leaving you to fill in the final pieces yourself. As Shepard is a master at mixing in a bright light of comedy amidst the thickness of foggy suspense, this Pulitzer Prize-winner is certainly one of his best. Given James Fairchild’s beautiful direction and his supremely talented cast, this production is firing on all cylinders. Anyone familiar with the QC theatre scene knows of the Flahertys, and of their talents, and they're amazing in this production that puts them on-stage together. Watching Pat here is like receiving a master class in acting. With the majority of his performance delivered while seated or laying on a couch, he's almost strictly limited to acting merely with his face and voice. But you can feel Dodge's pain from Pat's very first moment of the show, which begins with a coughing fit so believable that I questioned whether it was in the script. (It was.) Patti, meanwhile, hits her full stride in the show's second half and becomes wickedly ferocious, like a lioness fully claiming her den; Halie doesn't take lightly to strangers in her house. (As someone who always commands her time on-stage, the fearless Patti Flaherty is a comfort to watch, knowing she'll sink her teeth into every role she plays.)

Patti’s energy was matched by the very impressive performance by QCTW veteran Van Gerpen, whose character arc from meek and scared stranger to complete controller of the space was natural and flawless. In the role of Shelly's boyfriend, Pride delivered a tender Act II monologue describing a vison he had of his grandfather’s face becoming his father’s face, and then his father’s becoming his own, and so on. And Peitersen, as the clan's one-legged son, delivers the creepiest stage moment I've seen in a long time by simply placing his fingers in Shelly’s mouth without actually touching her, as in a sadistic game of Operation. This brings me to Schulz, who, to be honest, I was a little intimidated about reviewing. (He is my boss.) But from the moment he entered, the job became very easy, because I didn’t see Schulz on-stage at all – he appears completely lost in his Buried Child character. Tilden is more simple-minded than the others, and Schulz plays him with little to no expression, but with interpretive, knowing looks that make him incredible to watch. There was something about his eyes that even made Tilden's shucking of corn fascinating.

Fairchild’s direction of his cast is similarly superb. What generally pulls me out of a play's reality is when you can see actors acting, as if they're saying, “Look at me act! Look how hard I'm working!” There was not one moment in this production, however, in which I felt that its participants were merely performing, Mix that with a story that leaves you with much room for interpretation, and your visit to Buried Child gives you a lot to talk about on the drive home.

Buried Child runs at the QC Theatre Workshop (1730 Wilkes Avenue, Davenport) through October 29, and more information and tickets are available by calling (563)650-2396 or visiting QCTheatreWorkshop.org.