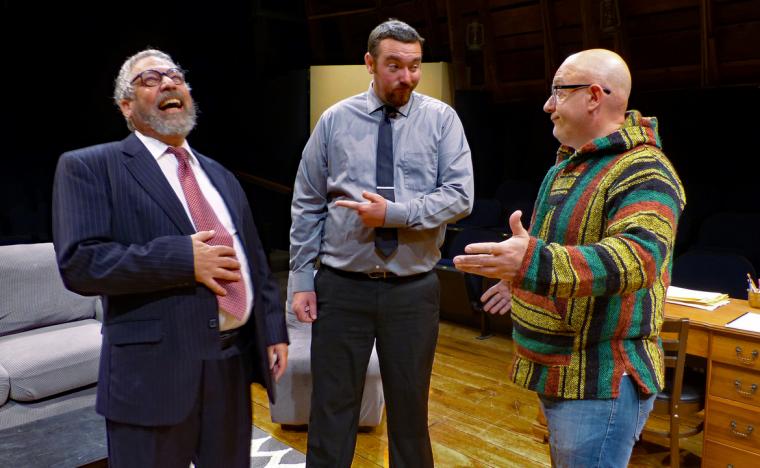 Praised by the Bangor News as “a smashing hit” and “a rib-tickler if ever I saw one,” the farcical comedy Here Lie Jeremy Troy enjoys a June 2 through 12 run at Geneseo's Richmond Hill Barn Theatre, its playwright Jack Sharkey also the author of such recent venue hits as Missing Link, I Take This Man, and 100 Lunches: A Gourmet Comedy.

In Here Lies Jeremy Troy, law clerk Jeremy Troy is up for a partnership. He is consequently visited by an old school chum, Charlie Bickle, who lives by sponging off of his old classmates. Not long after arriving, Charlie blackmails Jeremy into putting him up on the very night the head of the law firm is coming for dinner, whereupon Jeremy’s wife leaves. The eternal hanger-on Charlie, however, discovers that Jeremy’s degree is a fraud. A model is subsequently hired to play the wife’s part, but unfortunately, the woman is a beauty whose attempts to help continually backfire. And the situation becomes even more complicated when Jeremy’s wife unexpectedly returns.

Directing Here Lies Jeremy Troy for Richmond Hill is venue veteran Dana Skiles, whose other productions for the theatre include Clue: On Stage and One Flew Over the Cuckoo's Nest, and whose on-stage appearances include roles in Drinking Habits and Jack Sharkey's Missing Link. The show's title character is portrayed by Matthew McConville, previously seen in such Richmond Hill productions as The Diviners and California Suite, with the rest of Skiles' five-person cast composed of Charlie Bickel, Jim Harris, Elizabeth Shaffer, and Kathryn Troy. Skiles also serves as Here Lies Jeremy Troy's tech operator, and among her creative team, Megan McConville is the play's stage manager, Jennifer Kingry its lighting designer, Larry Lord its sound designer, and Mike and Jim Skiles its set builders.

Here Lies Jeremy Troy runs at the Richmond Hill Barn Theatre June 2 through 12, with performances Thursdays through Saturdays at 7:30 p.m. and Sundays at 3 p.m. Admission is $12, and more information and tickets are available by calling (309)944-2244 and visiting RHPlayers.com.