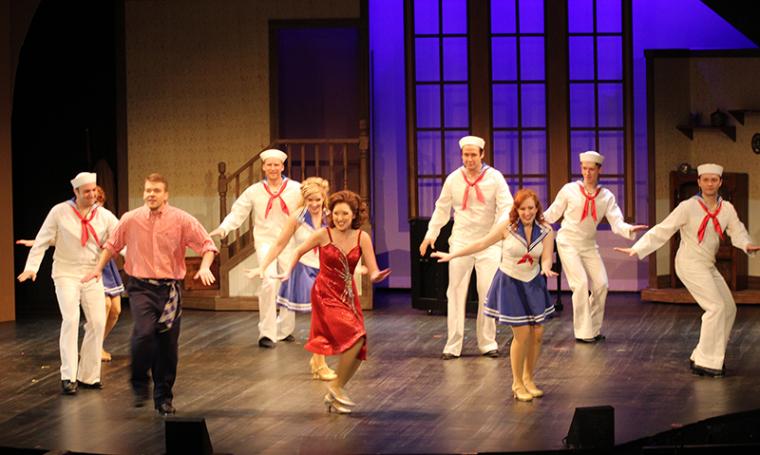 A Tony-nominated musical-comedy delight based on a much-loved Bing Crosby/Fred Astaire film, Holiday Inn will enjoy a luxurious staging in its area debut at Rock Island's Circa '21 Dinner Playhouse, the production's June 5 through July 20 presentation boasting costumes from the show's original 2016 Broadway run and a score of beloved compositions by songwriting master Irving Berlin.

Like its 1942 movie inspiration, the stage version of Holiday Inn tells the story of Jim, who leaves the bright lights of show business behind to settle down on his farmhouse in Connecticut … only to find that life just isn’t the same without a bit of song and dance. Jim’s luck takes a spectacular turn, though, when he meets Linda, a spirited schoolteacher with talent to spare. Together they turn the farmhouse into a fabulous inn with dazzling performances to celebrate each holiday, from Thanksgiving to the Fourth of July. But when Jim’s best friend Ted tries to lure Linda away to be his new dance partner in Hollywood, will Jim be able to salvage his latest chance at love? A true crowd-pleaser of an entertainment, this joyous musical features thrilling dance numbers, laugh-out-loud comedy, and a parade of Irving Berlin songs, with the iconic hits including “Blue Skies,” “Easter Parade,” “Steppin' Out With My Baby,” “Heat Wave,” “White Christmas,” “Be Careful, It's My Heart,” “Cheek to Cheek,” “Shaking the Blues Away,” and many more.

In addition to its 7:45 p.m. public previews on June 5 and 6, Holiday Inn runs June 7 through July 20, with performances on Fridays, Saturdays, and Wednesdays at 7:45 p.m.; Sundays at 5:45 p.m.; and Wednesday afternoons at 1:30 p.m. All shows will be preceded by meals and pre-show entertainment by the theatre's performing wait staff of Circa '21 Bootleggers, and more information and tickets are available by calling (309)786-7733 extension 2 or visiting Circa21.com.