Hooray for Holly's World: “Buddy: The Buddy Holly Story,” at the Timber Lake Playhouse through September 19 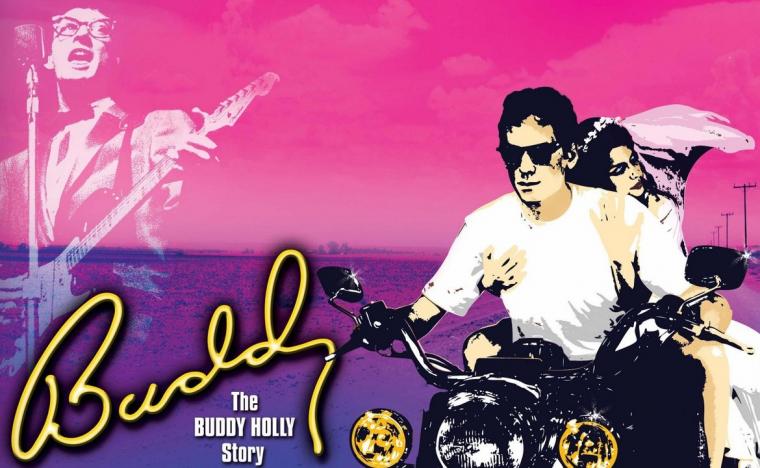 There were people dancing in the aisles at the Timber Lake Playhouse on Friday night, with patrons enjoying the theatre's current and vibrant musical production Buddy: The Buddy Holly Story. Audience members absolutely went wild for author Alan Janes' show – they were on their feet, clapping, cheering, and singing along to such classic tunes as “Peggy Sue,” “Maybe Baby,” and “Oh Boy.” The atmosphere was positively charged, and I found myself singing along, too. It was so good to see people cutting loose and having a fantastic time.

Under the guidance of director Dan Danielowski and artistic director Paul Stancato, Buddy tells the true story of Holly’s rise to fame in 1957, when his song “That’ll Be the Day” first hit the airwaves, until his tragic death less than two years later in Clear Lake, Iowa. The show features over 20 of the singer’s greatest hits, and the big-band sound on Friday was incredible. With kudos to Chris Wren for his extraordinary music direction, I felt like I had been transported back in a secret time machine and was enjoying a live concert with the real Buddy Holly.

In his role as Buddy, Matt McClure was incredible, and this extremely talented vocalist and musician had Holly’s look, voice, and mannerisms down to a T. He also jammed on his electric guitar, and even pulled off some tricky dance steps compliments of choreographer Felica Finley.

As Buddy shows us, and with the support of Lubbock, Texas's radio DJ Hipockets Duncan (Joe Titus), Holly and his friends Joe Maudlin (Roy Brown) and Jerry Alison (Kelan Smith) form the country and Western band Buddy Holly & the Crickets. After a tough start with Nashville's Decca Records, they sign a contract with innovative record producer Norman Petty (Darren Mangler), and suddenly Buddy Holly & the Crickets are the hottest act in the country, and go out on a national tour.

Buddy and his band eventually get to New York, where they perform at the Apollo Theater, making history as the first white band to perform there. While recording in New York, Buddy proposes to Maria Elena Santiago (Katrien Van Riel) – a Puerto Rican receptionist of his music publisher – after a five-hour courtship. With the tour already having its share of challenges – cold weather, the musicians sleeping on the studio floor – the band ultimately splits up, and Holly finds himself having to pursue a solo career.

The musicians in Timber Lake's Buddy Holly Story were exceptionally good, with actors Brown on bass and Smith on drums; both delivered strong vocals, and their musicality was stunning. I felt like I was at a 1950s style rock concert for most of the show. And even though there were some technical difficulties with the sound on Friday, the overall professionalism was stellar. John Burkland's lighting design was superb – lots of warm purples and pinks along with roving, colored spotlights that really added to the rock-concert feel.

I also loved the costuming by Aaron Kubacak, with Buddy decked out in an all-white suit and black tie in one scene and a velvety-blue sport jacket in another. The ladies wore beautiful, era-appropriate dresses that were lovely and wigs (also compliments of Finley) that were adorable. And the women's jewelry was bright and colorful, as well as noticeably oversized.

In truth, there was so much talent on display in this show that I was overwhelmed (in a good way). Mangler also played the Big Bopper, and he was priceless, seemingly made for the role as he belted out “Chantilly Lace,” with style and flair. Not to be outdone, Luis Garcia-Godoy, portraying the legendary Ritchie Valens, was outstanding in his performance of “La Bamba.”

Yasir Muhammad stepped into multiple roles as an Apollo Theater singer Jack Daw, the MC, and the WDAS DJ, executing some high-energy dance moves and keeping the party going all the time. As another Apollo singer, Chandler Allen was bubbly, cute, and just adorable. Sarah Statler, Katrien Van Riel, and Callie Hester made up a beautiful trio that did old-fashioned jingles throughout the show, and their harmonies were spot-on, along with their mannerisms and choreography. Statler and Van Riel also played the keyboards during the Clear Lake scenes, while Hester was on the sax, and the other gifted band members for the evening’s festivities were Chris Wren on guitar, Mike McCoy on trumpet, and Tom Cartwright on trombone.

I thoroughly enjoyed my evening at the Timber Lake Playhouse on Friday, and it prompted me to go online and research a little bit more about the life and death of the remarkable musician Buddy Holly. It was just after midnight, February 3, 1959, in Iowa, when we lost Buddy Holly, his fellow headliners Ritchie Valens and J.P. "The Big Bopper" Richardson, and the young pilot flying the plane. Buddy: The Buddy Holly Story is a must-see for those who loved the artist and his friends – extremely talented souls gone far too soon.

Buddy: The Buddy Holly Story runs at the Timber Lake Playhouse (8215 Black Oak Road, Mt. Carroll) through September 19, and more information and tickets are available by calling (815)244-2035 and visiting TimberLakePlayhouse.org.