“How to Succeed in Business without Really Trying,” April 26 through May 5 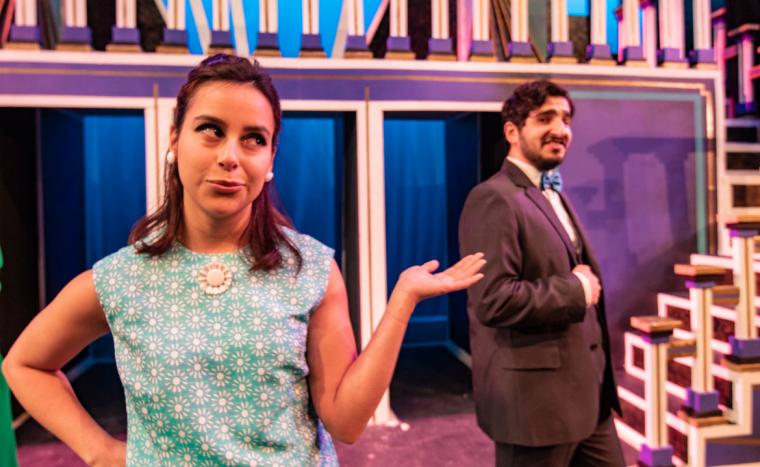 Muriel Melgoza and Rami Halabi in "How to Succeed in Business without Really Trying" at Augustana College -- August 26 through May 5.

A legitimate musical-theatre classic that won both the Tony Award for Best Musical and the Pulitzer Prize for Drama, How to Succeed in Business without Really Trying wraps up Augustana College's 2018-19 mainstage theatre season from April 26 through May 5, treating audiences to a joyously biting, tune-filled delight that the New York Times called “crafty, conniving, sneaky, cynical, irreverent, impertinent, sly, malicious, and lovely – just lovely.”

With its exhilarating score by Frank Loesser that includes the beloved show tunes “I Believe in You,” “The Company Way,” and “Brotherhood of Man,” How to Succeed in Business without Really Trying is a timeless satire of big business and all it holds sacred. Following the rise of a budding, big-city professional who uses the titular handbook for devious inspiration, the musical finds J. Pierrepont Finch climbing the corporate ladder from lowly window washer to high-powered executive, tackling such familiar but potent dangers as the aggressively compliant “company man,” the office party, backstabbing coworkers, caffeine addiction and, inevitably, true love.

The winner of numerous awards during its many theatrical incarnations – with Tonys for Best Actor in Musical going to both Robert Morse in 1962 and Matthew Broderick in 1995 – this stage treat by Loesser and Abe Burrows has been a musical favorite for generations. And according to director Shelley Cooper, she and her cast and production crew of more than 65 Augustana students are “exploring the fact that there is truth in comedy, uncomfortable and awkward life moments, 3D characters with interesting relationships, and an in-your-face, fast-paced, episodic structure – the show does not stop moving!” As some of How to Succeed's initially presented attitudes might seem quaint, or quite simply wrong, to 2019 audiences, Cooper adds that she and her show's participants are also “grappling with serious issues such as toxic masculinity in the work force, but how there is slight hope for change.”

Cooper previously directed the musicals The Drowsy Chaperone and Elegies for Angels, Punks, & Raging Queens for Augustana and Big River for the Mississippi Bend Players, and portrayed its title's legendary singer in the one-woman show La Davina: The Last Interview of Maria Callas. Portraying J. Pierrepont Finch in How to Succeed is Augustana senior Rami Malbi, a show-stopper as The Drowsy Chaperone's Adolpho who will appear in Cooper's Dames at Sea for the Mississippi Bend Players this July. And with the college's Dr. Michelle Crouch serving as the production's music director, other well-loved How to Succeed characters are enacted by Lauren Larson (Rosemary), Drew Gilson (J.B. Biggley), Daniel Williams (Bert Bratt), Muriel Melgoza (Smitty), Brycen Witt (Bud Frump), Cheyenne Powell (Miss Jones), and Abby Overman (Hedy).

How to Succeed in Business without Really Trying will be presented in Augustana College's Brunner Theatre Center April 26 through May 5, with performances at 7:30 p.m. on Fridays, Saturdays, and Sunday April 28, and 1:30 p.m. on Sunday May 5. Admission is $10-15, and more information and tickets are available by calling (309)794-7306 or visiting Augustana.edu.