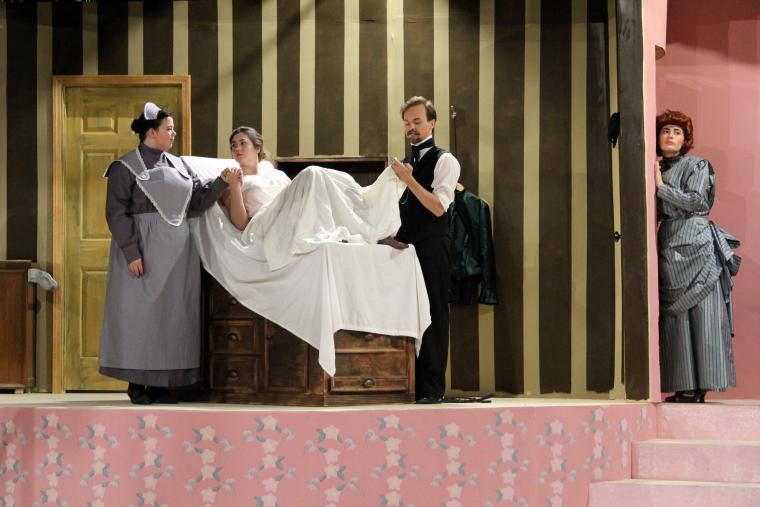 In this show's time period, you see, it was believed that women could not, and did not, have any sexual desire. Physicians claimed that sensual visions and feelings of irritability, anxiousness, and insomnia were mere side effects of “hysteria” – a buildup of fluids in the womb. With the excitement of electricity's invention still in the air, Sarah Ruhl's play finds Dr. Givings (Tristan Odenkirk) inventing a vibrating machine to help relieve females of their hysteria. And while I wasn't in love with the material, I did enjoy all of the cast’s individual performances, with the production as a whole, under Jennifer Popple’s direction, coming together very nicely.

I'm constantly blown away by the sets every time I walk into Augustana productions, and on January 26, it was the two-story home of Dr. and Mrs. Givings as created by scenic designer Emma Brutman, featuring a picturesque living room with rounded steps leading to the doctor's examining room – in this case, The Next Room. With characters having to travel up and down the steps, the set's double levels added much in the way of tension; when Dr. Givings leads wife Catherine (the bubbly Micaela Cushing) up the steps to show her his new instrument, the anticipation built into their climb added to the uncertainty of what was about to happen.

Odenkirk delivers a wonderfully varied performance, exuding just the right emotions when upset with his wife for her “betrayal” in touching another man’s cheek, and taking a delightfully nonchalant attitude when applying his “therapy” to patients. Cushing’s cheery disposition, meanwhile, was impressively juxtaposed with Catherine's actual feelings. Struggling with her milk coming in after giving birth, she is resigned to having their neighbors' house maid Elizabeth (Brinda Murali) feed the child, and the excellent Cushing expresses so much with her face whenever Elizabeth is in the room, her pain and disappointment in herself extremely apparent in her eyes. 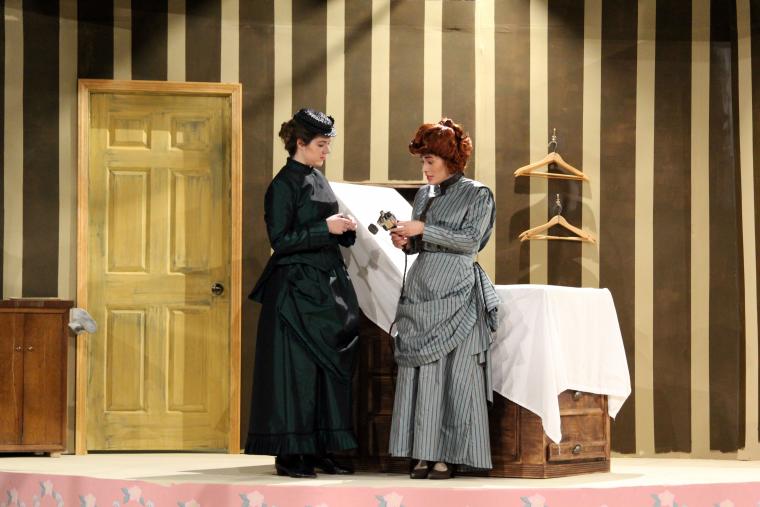 Murali is fascinating to watch as the nervous house maid to neighbors Mr. and Mrs. Daldry (Jaryd Whitmore and Melina Herman). Elizabeth has just lost her own baby – that's why she's able to feed Mrs. Givings' – and Murali plays the role with a lot of nervous energy, looking fearful to even make eye contact.

Like Catherine, Mrs. Sabrina Daldry has a lot of pent-up energy at the top of In the Next Room, and as she's treated by Dr. Givings, we see her loosen up and begin finding out more about who she really is. Herman does a fine job of demonstrating the character's full emotional arc throughout the performance, and Whitmore delivers a lot of hysterically oblivious lines, many of them Ruhl’s blatant swings at innuendo.

The majority of the comedy begins to arrive at the top of Act II with the arrival of world traveler Leo Irving, and portrayer James Wheeler added a whole new energy as this frustrated, lovelorn artist. Even with his simple entrance and acknowledgment of the on-stage women (“Ladies … ”), he had the opening-night audience laughing, and his charisma appeared to be a large part of why Catherine begins to recognize her desires.

One thing the entire cast handles quite well is the bone-dry delivery of Ruhl's comedic lines, with much of their speedy timing and presentation bringing British comedies to mind – where so much is said with a single eyebrow lift that if you're not paying attention, you could easily miss the joke. I was very appreciative of how director Popple chose not to make a big meal of each gag, but rather kept the tempo moving, trusting us to appreciate the humor without giving us a big wink.