Lauded by Deadline as "an endorphin assault" and a stage work that delivers "warm-bath pleasure like no other show since 42nd Street," Broadway's yuletide treat Irving Berlin's Holiday Inn wraps up the 2021 season for Quad City Music Guild, its December 1 through 5 run sure to prove why CurtainUp called the musical "a trip back to sheer old-fashioned good-time entertainment."

Based on the 1942 film classic starring Bing Crosby and Fred Astaire, Irving Berlin's Holiday Inn tells the story of Jim, who leaves the bright lights of show business behind to settle down on his farmhouse in Connecticut. But life just isn't the same without a bit of song and dance. Jim's luck takes a spectacular turn, however, when he meets Linda, a spirited schoolteacher with talent to spare. Together they turn the farmhouse into a fabulous inn with dazzling performances to celebrate each holiday, from Thanksgiving to the Fourth of July. But when Jim's best friend Ted tries to lure Linda to Hollywood to be his new dance partner, will Jim be able to salvage his latest chance at love? A joyous musical that features thrilling dance numbers and laugh-out-loud comedy, Irving Berlin's Holiday Inn also provides a parade of hit Irving Berlin songs, among them "Blue Skies," "Easter Parade," "Steppin' Out with My Baby," "Heat Wave," "Be Careful, It's My Heart," "Cheek to Cheek," "Shaking the Blues Away," and the beloved holiday standard "White Christmas." 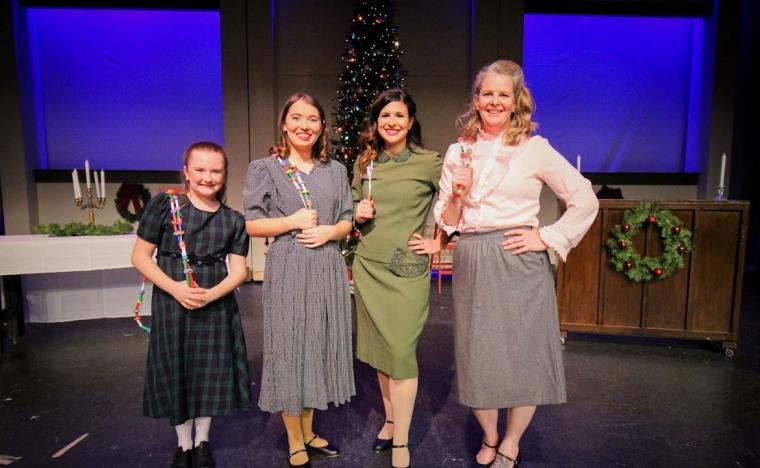 Directing Irving Berlin's Holiday Inn is Luke Vermeire, a Music Guild veteran who appeared in the company springtime cabaret and served as scenic designer for its summer production of Mamma Mia! The characters of Jim, Linda, and Ted are respectively played by a trio of additional Music Guild talents: Tyler Henning (Miracle in Bedford Falls, Beauty & the Beast), Lauren VanSpeyBroeck (Matilda: The Musical, Legally Blonde: The Musical), and Daniel Williams (Monty Python's Spamalot, A Chorus Line).

Irving Berlin's Holiday Inn runs at the Prospect Park Auditorium December 1 through 5, with performances Wednesday through Saturday at 7:30 p.m. and Sunday at 2 p.m. Admission is $11-16, and more information and tickets are available by calling (309)762-6610 and visiting QCMusicGuild.com.