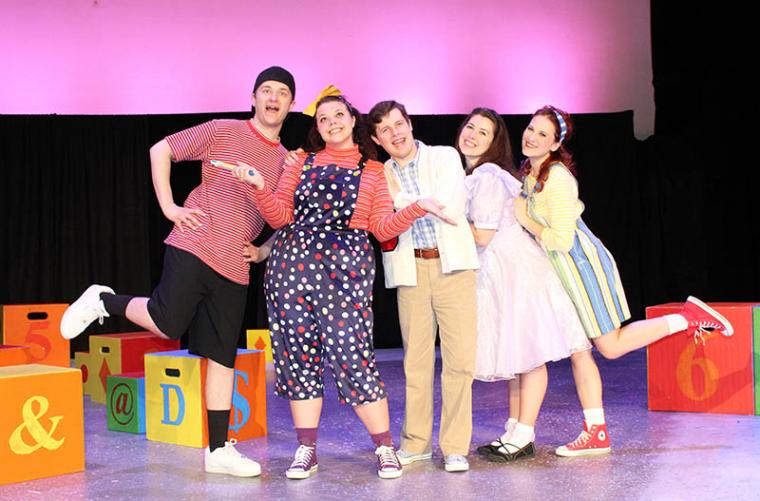 Jake Daley, Helene DeVine, Derrick Bertram, Joanna Mills, and Kirsten Sindelar and “Junie B. Jones Is Not a Crook" at the Circa '21 Dinner Playhouse -- April 23 through May 18.

With DC Theatre Scene calling the show “a wonderfully fun production” that's “clever enough to charm all ages,” Rock Island's Circa '21 Dinner Playhouse opens its 2016 season of high-spirited family musicals with Junie B. Jones Is Not a Crook, an adaptation of Barbara Park's beloved children's book that the Maryland Theatre Guide described as “almost too much fun to be as heartfelt as it is.”

This continuation of the popular book and stage series showcasing Junie B. Jones – a young girl with a friendly, funny, curious, and occasionally trouble-making personality – opens with its heroine enduring a terrible day at school, as someone has apparently stolen her favorite furry mittens. So when Junie B. finds a wonderful pen of many colors, she believes she should be allowed to keep it, because, as Junie says, “Finders keepers, losers weepers!” Junie's day gets even better when a handsome new boy shows up in her kindergarten class. Unfortunately, Junie's classmates Grace and Lucille both want him to be their boyfriend. But maybe he will love Junie B. instead when he sees her wonderful new pen? After all, it's okay to keep it, because Junie B. Jones is not a crook … or is she? What follows is a hilarious and touching tale that delivers, in a hugely entertaining way, valuable lessons about taking what doesn't belong to you and the best ways to make friends. As DC Metro Theater Arts stated, “Junie B. Jones Is Not a Crook is sure to entrance children and adults alike.”

Junie B. Jones Is Not a Crook runs at the Circa '21 Dinner Playhouse from April 23 through May 18, with 10 a.m. and 1 p.m. show-only performances held on scheduled Tuesdays, Thursdays, Fridays, and Saturdays. Admission is $9.50 per person with group rates of $7.50-9 available, and more information and tickets are available by calling (309)786-7733 extension 2 or visiting Circa21.com.