Killing Me Softly with His Song: “A Gentleman's Guide to Love & Murder,” at the Spotlight Theatre through February 24 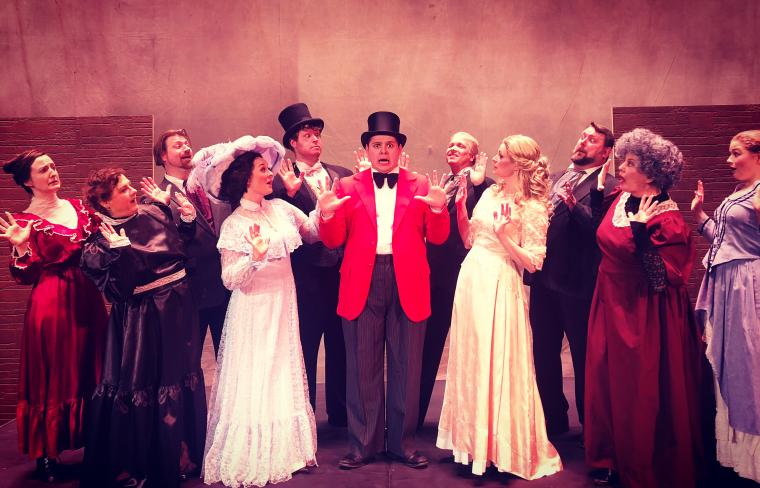 Friday's opening-night performance of A Gentleman's Guide to Love & Murder at the Spotlight Theatre was hilarious, with a richly talented company of performers that blended together extremely well. This musical comedy was full of clever slapstick routines and catchy tunes executed by terrific actors who also have strong singing voices, and director Brent Tubbs did an outstanding job delivering a satisfying production that is sure to make you chuckle.

Based on a novel by Roy Horniman, with its book and lyrics by Robert L. Freedman and its score by composer Stephen Lutvak, this tall tale of love and murder has a lot of funny twists. In it, the mysterious Miss Marietta Shingle (Nancy Teerlinck), arrives to tell Monty Navarro (Ian Sodawasser), a poor commoner Englishman, that he's actually an heir to the upper-class D’Ysquith family. Miss Shingle informs Monty that he is ninth in line to inherit the earldom of Highhurst, and Monty comes up with a variety of creative ways to prevent the eight earls preceding him from inheriting the earldom first.

His plan involves murder, which leads to all sorts of mayhem and dubious characters and silly situations. Monty is also motivated to become rich to win the love of Sibella Hallward (Jenny Winn), a stunningly beautiful, self-centered woman who is also scheduled to marry another, more affluent man. But Navarro is not only in love with one woman. To complicate matters, his affections are shared with his other love interest Phoebe D’Ysquith (Sara Tubbs), who is actually the sister of his cousin Henry. 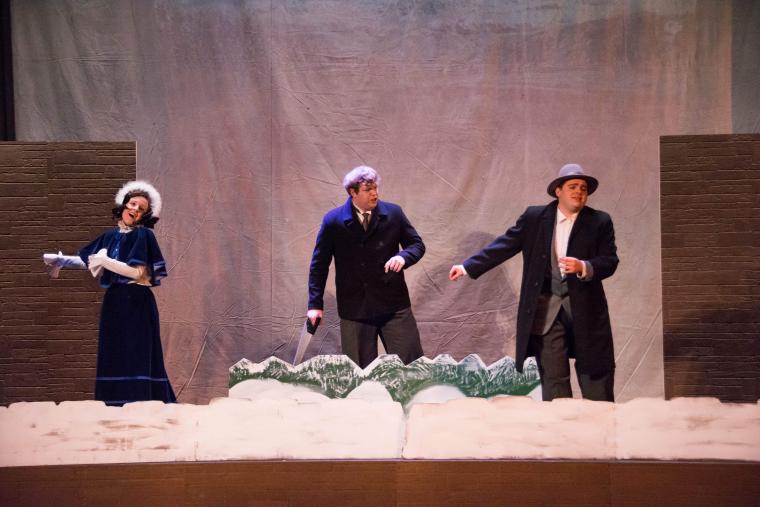 Monty takes a tour of Highhurst Castle, the D’Ysquiths’ ancestral home, and begins his journey to become a British nobleman, deciding to try his luck with the clergyman in the family – the fickle old man Reverend Lord Ezekial D'Ysquith (Brett Mutter). The Reverend shows Monty around the ancestral family church but denies that he is heir to the family fortune, and Mutter consequently portrays every member of the D’Ysquith family, all of which he enacts brilliantly.

Sodawasser’s Monty comes across as an overgrown child demanding his way, and the actor’s comedic timing, vocal chops, and English accent were spot-on, making his character likable despite his murderous tendencies. Winn, meanwhile, is a consummate songbird as she flitters about as Sibella, bringing fantastic intonation to her delightful lyrics, while Tubbs, with her innocent, girlish demeanor, reminded me of Julie Andrews, having no apparent problem hitting those high notes.

Although the actors were outstanding, the set design and build by Jay Whitmore was lacking that polished look. Some aspects of the design, such as the snowbanks, were under-painted and lacked visual impact, and while various background images were adequately projected onto a big screen, Jacob Sikorski's lighting design caused most of the images to look washed out. That being said, there were also very creative aspects to the scenic design. During the song “I Don’t Understand the Poor,” for example, cast members replaced portraits of themselves on the wall with their actual faces by sliding the picture frames in a manner that allowed them to appear behind the picture frames. Designer Alexis Lotspeich's costumes were colorful and vibrant, which really complimented the cast and overall production, and I was amazed at how well Mutter was able to successfully change into a multitude of costumes while actually breaking a sweat. (At one point, his mustache appeared to be drooping, but that was understandable as he was moving at the speed of light trying to transform himself into his characters.) When portraying Lady Hyacinth D’Ysquith, a devoted philanthropist, Mutter is hysterically dressed in a flamboyant mustard-yellow and bright-red gown; at first glance, he looked much like Ronald McDonald.

When all was said and done, I walked away singing about Monty Navarro, a memorable character that made a lasting impression. But the true star of the show, for me, was Brett Mutter, whose energy and presentation of the entire D’Ysquith family was mind-boggling. He embodied each of his roles with such finesse, and brought to life their unique personalities, that he was amazing to watch. What a talent!

Congratulations to the entire company of A Gentleman’s Guide to Love & Murder. The Spotlight Theatre might be a newcomer to the Quad Cities theatre scene, but I foresee a time when this theatre's every performance will be sold out.

A Gentleman's Guide to Love & Murder runs at the Spotlight Theatre (1800 Seventh Avenue, Moline) through February 24, and more information and tickets are available by calling (309)912-7647 or visiting TheSpotlightTheatreQC.com.