King Sweet: “The Mountaintop,” at the Mockingbird on Main through August 7 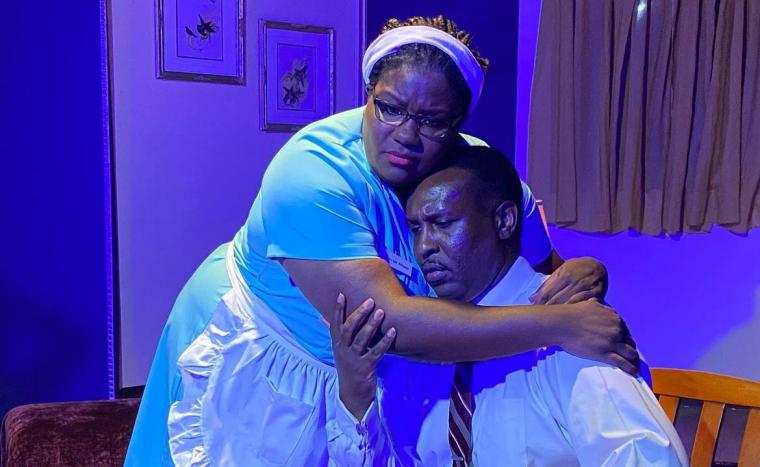 Erica Faye and Anthony Hendricks in The Mountaintop

I had the pleasure of attending Friday’s performance of The Mountaintop at the Quad Cities’ newest live-theatre venue, the Mockingbird on Main. Penned by American playwright Katori Hall, this story is a fictional depiction of Dr. Martin Luther King Jr. and his last night on earth, the eve of his assassination. As as directed by Kira Rangel, with production design by Savannah Bay Strandin and Tristan Tapscott, this piece takes patrons into the unique inner struggles of one of the most influential civil-rights leaders of all time.

It's the evening of April 3, 1968, and Dr. King (Anthony Hendricks) is settling in for the night in Room 306 at the Lorraine Motel in Memphis, Tennessee. Dr. King was in Memphis to speak out on behalf of the Memphis sanitation workers who went on strike after the death of two people crushed by a malfunctioning truck; the workers' civil rights were being denied, with poor operating conditions and low pay, so King led a demonstration the week before. He sends a friend to fetch him a pack of cigarettes – Pall Malls, to be specific – as he begins to relax after delivering his speech titled “I’ve Been to the Mountaintop.” (In his sermon, he declared, “We’ve got to give ourselves to this struggle until the end.”) As a storm rages outside, the man orders room service, and consequently meets Camae (Erica Faye), a beautiful maid more mysterious than she initially appears.

Hendricks and Faye were The Mountaintop's only two actors, and on Friday, both were phenomenal, coming across as natural and smooth despite an extravagant amount of dialogue. Hendricks donned a white dress shirt and tie with black slacks, and when he took off his shoes, there was a huge hole in one sock. Faye wore a teal-colored maid’s uniform with white apron and head band. Like its costuming, nothing about the show was excessive, and the acting was simple and conversational; the performers made you forget that you were attending a play. Their timing was impeccable, and I felt like a fly on the wall watching as the events unfolded.

Doug Kutzli, who was in charge of “properties appropriation,” made great use of the entire set, which was elevated above a wooden floor and surrounded by a dark blue border. The Mockingbird venue is small but cozy, and given the limited space for a set, designers Strandin and Tapscott pulled off a basic but quite lovely hotel room decorated with a golden-brown curtain window, dresser (with a mirror-less mirror), chair, and lamp, as well as a covered bench that doubled as the end of the bed. 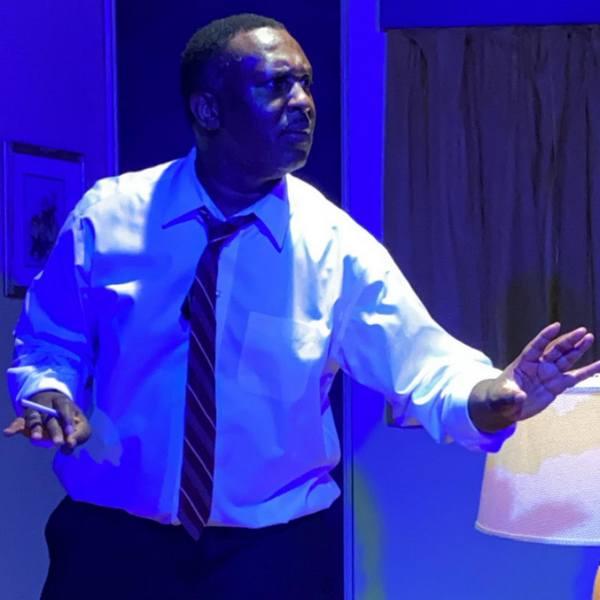 Khalil Hacker’s sound design, with its echoes of distant thunder, was impeccable, as were his lighting effects. Images were projected across the set – and, for that matter, across the entire room and on the backs of audience members toward the end of the production. There were also glowing red and purple lights that were used to add to the mood of each scene.

I found myself listening carefully to every word spoken at The Mountaintop, and by the end of the show, I was filled with respect and awed by the courage and strength that Dr. Martin Luther King, Jr. exemplified during his lifetime. Rangel's presentation was a reminder of how cruel humans can be, as well as the need for peace and unity throughout our country. Together we can do so much more for positive change, and regardless of how some of the “powers that be” try to turn us against one another by dividing us by race, creed, religion, or gender, we have the capacity to override violence and respect humanity as a whole.

And I was similarly amazed with how well everything flowed together in such an intimate playing area, and how the actors were able to keep my attention throughout the evening. This show did have some content that others may find offensive – a few sexual innuendos and references to God as a “She” – but I think that most people will walk away with a lot of food for thought.

One theme I took away from the Mockingbird on Main’s production was the importance of overcoming fear. We all have fears and anxieties, as did Dr. Martin Luther King, and watching The Mountaintop reenforced, for me, the need to be courageous and stand up for what is right, especially as it applies to our chaotic world today. Our time here is short, so let us be fearless and respectful of all humanity, and prove that, from above the chaos and destruction, we can also take in the whole picture – the big picture.

The Mountaintop runs at the Mockingbird on Main (320 North Main Street, Davenport IA) through August 7, and more information and tickets are available by visiting TheMockingbirdOnMain.com.