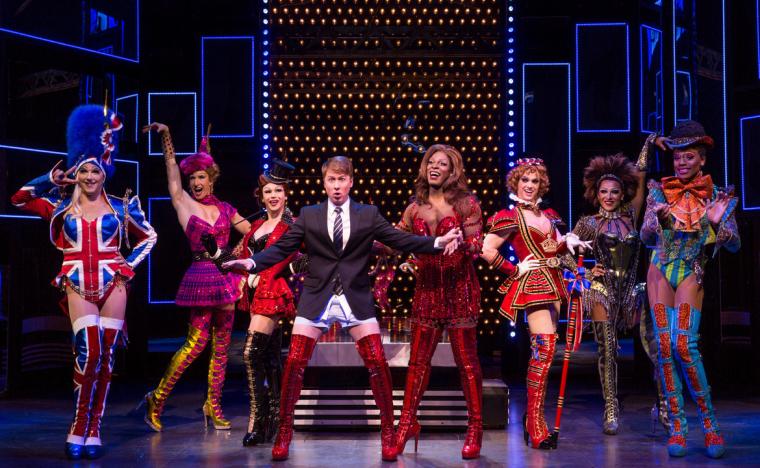 Winner of six 2013 Tony Awards including Best Musical and Best Score for pop icon Cyndi Lauper in her first outing as a Broadway composer, the high-kicking musical Kinky Boots finds its touring production commanding the stage at Davenport's Adler Theatre on June 19, a work that Entertainment Weekly called “cause for celebration” and that Time Out New York labeled “the very model of a modern major musical.”

Based on true events and the 2005 film that earned a Golden Globe nomination for star Chiwetel Ejiofor, the bighearted Kinky Boots tells the story of two people with nothing in common – or so they think. As the show begins, Charlie Price has reluctantly inherited his father's shoe factory, which is on the verge of bankruptcy. Trying to live up to his father's legacy and save his family business, Charlie eventually finds inspiration in the form of drag-queen headliner Lola. A fabulous entertainer in need of some sturdy stilettos, Lola turns out to be the one person who can help Charlie become the man that he's meant to be, and as they work to turn the factory around, this unlikely pair find that they have more in common than they ever dreamed possible.

Filled with elaborate costumes, exhilarating choreography, and a truly moving and powerful story with a book by multiple Tony winner Harvey Fierstein, Kinky Boots debuted on Broadway in April of 2013 and immediately charmed both audiences and critics, with the New York Times calling it an “inspired” musical entertainment “about finding your passion, overcoming prejudice, and transcending stereotypes.” With Lauper providing a score boasting 16 new compositions, the show earned a season-high 13 Tony nominations that resulted in six wins, with Lauper's victory marking the first time a woman won solo in her Best Score category. Kinky Boots' Broadway soundtrack, meanwhile, premiered at number one on the Billboard Cast Albums Chart and number 51 on the Billboard 200 – making it the highest-charting cast recording since The Book of Mormon – and went on to win the Grammy Award for Best Musical Theater Album. When the show's Broadway run officially ended two months ago, Kinky Boots had played 34 New York previews and 2,507 performances.