Legends of the Fall (of '56): "Million Dollar Quartet," at the Circa '21 Dinner Playhouse through November 5 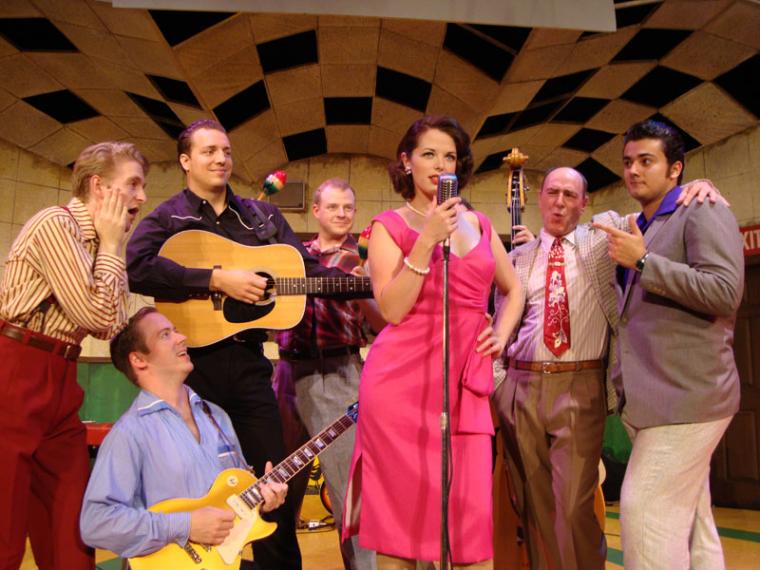 As the saying goes: A picture is worth a thousand words. But could a creative team spin a tale based on that picture and create a nostalgic narrative worth more than words? In the case of Million Dollar Quartet: You betcha!

There was a photo taken on December 4, 1956, that shows four rock 'n' roll legends – Elvis Presley, Carl Perkins, Johnny Cash, and Jerry Lee Lewis – posed around a spinet piano during a Sun Records jam session. Co-authors Colin Escott and Floyd Mutrux consequently fleshed out the tale behind that photo and that session, and turned it into the Tony-winning Million Dollar Quartet, currently playing at the Circa’ 21 Dinner Playhouse. Yet while the rockers look cool and relaxed in that picture, Circa '21's August 31 preview performance was anything but relaxed, as that place was jumpin’. Under the direction of Curt Wollan, the musical had a vibrant energy that began with its “Blue Suede Shoes” opener and rarely let up through the rousing finale “Whole Lotta Shakin’ Goin’ on.”

Four talented performers take on the personae of Million Dollar Quartet's famous musicians: Brandon Fillette as Lewis, Stephen Edwards Horst as Cash, Morgan McDowell as Presley, and Christopher Wren as Perkins. Playing such iconic figures can't be easy, as the actors are no doubt expected to look and sound like the figures they're portraying, and while Circa '21's quartet boasted strong voices and was fun to listen to, only Wren and Fillette consistently sounded like their characters. Although Horst and McDowell did channel the legends in their acting and looks, Horst didn’t have that coal-mine-deep Cash sound, and although I thought Elvis was still in the building when McDowell started his rendition of “That’s All Right,” he lost some of that smoky Elvis drawl on other numbers. But Horst's and McDowell's extraordinary vitality and musicality still made their performances entertaining, and I was lucky to be seated so I could clearly watch the nimble fingers of Fillette, who pounded on those ivories with impressive virtuosity. Fillette was so engaging as the young, brash Jerry Lee that it was frankly hard to keep my eyes off him. Looking like he was off the pages of some 1950s comic strip with bright-red high-water pants, suspenders, and a mop of blond hair, Fillette's enthusiasm never waned whether jamming, wisecracking with Perkins, or making moon eyes at Presley’s girlfriend Dyanne. (Paige Salter, who plays the role and sings solo on “Fever” and “I Hear You Knocking,” has a sultry, million-dollar voice herself.)

As for Wren, who also serves as the production's music director, he appeared totally comfortable as Perkins. Blasting out rockabilly guitar riffs and exchanging insults with Jerry Lee, Wren effectively presented his musician as vulnerable and aching to get a second hit, and really demonstrated his competitive side when angry at Elvis for having stolen “Blue Suede Shoes,” a tune first written and recorded by Perkins. This was just one piece of history I learned between songs, as Million Dollar Quartet is narrated by Sun Records founder Sam Phillips. Tom Walljasper portrays this down-home, optimistic music pioneer with great verve, especially when making countrified asides, and at times addresses the audience directly, entreating them, like a proud papa, to clap for his protégés. Through Phillips, we learn how the musicians were discovered, and that their back stories share a common thread: Each was a poor Southern boy who loved playing music, and Phillips was the only person who would listen.

With the musical set in Sun Records' ragtag, 1956 recording studio in Memphis, scenic designer Erica Zaffarano appears to have perfectly reconstructed every vintage detail. The amps, microphones, recording equipment, and instruments seem era-authentic, and with its tiled walls and ceiling and its only wall décor being three gold records – although a Sun Records logo hangs above the stage – the space feels appropriately intimate. I enjoyed the feeling of eavesdropping on that historical musical moment of 60 years ago, a feeling aided by the action being continual, with no blackouts or scene changes.

As the score's 22 songs include “Hound Dog,” “I Walk the Line,” and “Great Balls of Fire,” it's hard to pick a favorite from the show's great blend of rockabilly, R&B, and country. But for me, the best ones found the performers (among them Perry Orfanella's and Tristan Tapscott's studio musicians) slowing down a bit on “Down by the Riverside” and “Peace in the Valley,” numbers in which the singing voices were truly showcased and the harmonies were impeccable. Yet whatever your own favorites prove to be, Million Dollar Quartet is a must for anyone who enjoys the music that helped shape rock 'n' roll. It's nostalgic, it's informative, and it's a whole lotta fun goin’ on.

Million Dollar Quartet runs at the Circa '21 Dinner Playhouse (1828 Third Avenue, Rock Island) through November 5, and more information and tickets are available by calling (309)786-7733 extension 2 or visiting Circa21.com.