Let's Do the Time Warp Again! Seriously! Let's! : “The Rocky Horror Show,” at the Circa '21 Speakeasy through October 28 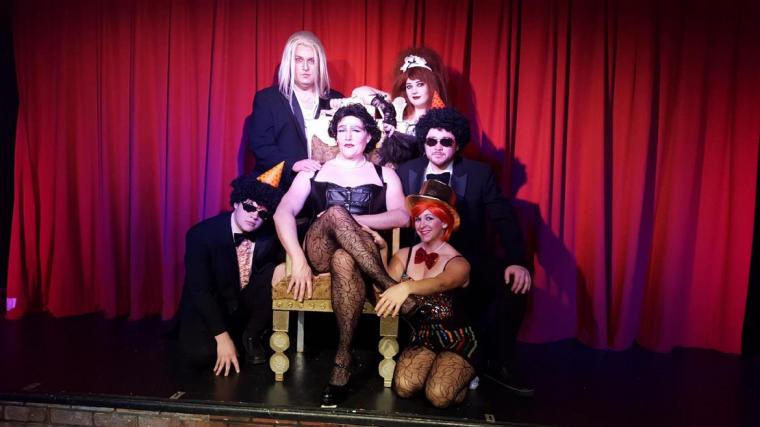 It's been said that laughter is the best medicine, and during the Circa '21 Speakeasy’s Friday-night production of The Rocky Horror Show, I got a really good dose of it. Bret and Erin Churchill, who co-directed and choreographed the show, have put together a fast-paced, high-energy production full of terrific singing and hilarious fun.

I’m hesitant to admit it, but I’d never seen Rocky before, either on-stage or at the movies. However, I certainly knew of it; I’d heard some of the music and knew of its cult following, and knew that it was a bit on the wild side. As was confirmed for me on October 20, Rocky is raucous, campy, outrageous, and, at times, R-rated-raunchy. But I can forgive a show just about anything if it's genuinely funny, and OMG, funny it was.

When I entered the Speakeasy, I was asked if I had attended the venue's Rocky before. I said “no,” and was asked to lean forward to receive a red-lipstick “V” on my forehead, indicating that this was my first time. (Insert sexual innuendo here.) My companion lied about having previously seen the show, fearing it might call unwanted attention to herself. But she needn't have worried, as there was no consequence other than looking goofy, wearing lipstick where one usually doesn't.

The Speakeasy stage is small and the facility holds enough tables and seating for 130 patrons. However, great use is made of the space here, and the intimate, nightclub-style setting is perfect for a show that involves so much audience participation. 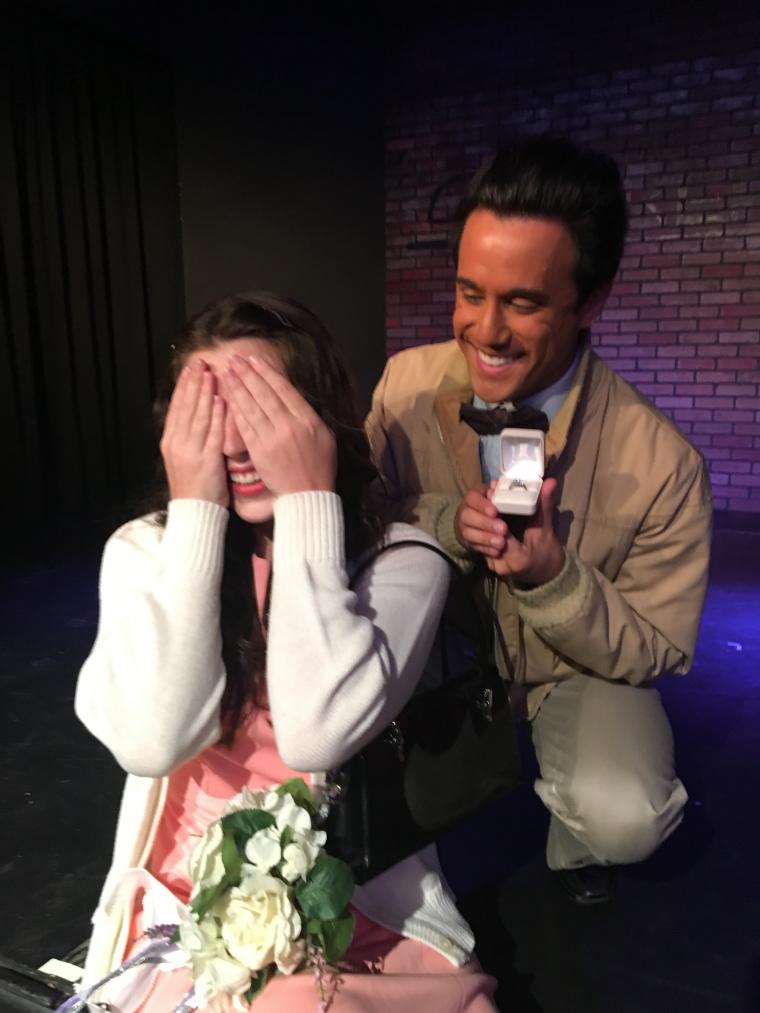 Rocky's cast, too, is relatively small, but even though it featured only 10 actors, the production somehow felt much larger to me. Every performer was really terrific, great at belting out the songs – every number a hit in my book – and possessing the ability to take everything over the top for full effect.

Anyone who knows anything about Rocky knows that its fan base has propelled it to great success over the years, and let me tell you, I saw some devoted fans on Friday night, having the good fortune to be seated next to about six people who were all in costumes replicating those of characters on-stage. And if that 7 p.m. production seemed larger than life – Rocky's schedule features performances at 7 and 11 p.m. – it was largely because of everything the audience brought to the production. Prop bags are available for $3, and I bought one so I could involve myself in the action as the show went along. (The bag also includes an instruction sheet telling us when to use each prop.)

Doug Kutzli's Narrator opens the show and appears throughout as a medium of sorts between the on-stage characters and the audience. The Usherette (Kathryn Jecklin, who also doubles as Magenta) consequently sings about science-fiction double-features – a perfect intro, as Rocky is not only a celebration of non-traditional sexuality, but also a spoof of science-fiction and B-horror movies, with all of the weirdness that that implies.

We soon meet Janet (Joanna Mills) and her fiancé Brad (Tommy Ratkiewicz-Stierwalt), who appear to be a couple right out of the 1950s. The story follows their hapless plight when, one night in the rain, their car breaks down – at which point audience members mimicked the characters by covering their heads with prop-bag newspapers. Brad and Janet then end up at the castle of Dr. Frank N Furter (Dion Stover), who introduces himself as a “sweet transvestite from Transsexual, Transylvania.” Need I say more? 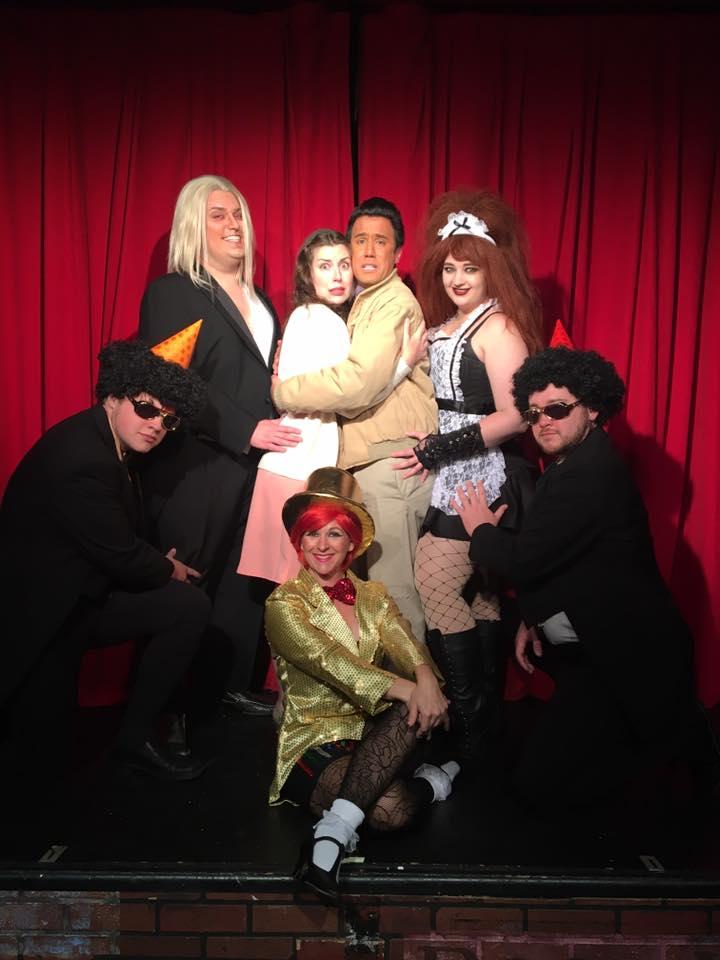 Okay. I will. Frank N Furter says that he knows the secrets of life itself and reveals his creation: Rocky (Chase Austin),who turns out to be one hunk of a guy in tight gold shorts. It was here that the on-stage characters responded with applause and noisemakers and the crowd did the same – and it was a bit of a surprise when one of the “characters" at the table next to ours ripped off his clothes to reveal that he, too, was wearing shiny gold shorts.

Rounding out this cast of characters are the groupie Columbia (Sunshine Ramsey), the butler Riff-Raff (Nicholas Munson), the unfortunate Eddie (Max Moline) who has met more than one violent end, and Doctor Scott (Aaron Johnson), the wheelchair-bound doctor who happens to be a Nazi. When this latter figure entered, Brad cried out “Great Scott!”, and we all tossed our toilet-paper streamers in the air. (Later, when reference was made to Scott's vast knowledge, one of the audience callbacks was “He's a walking encyclopedia!”)

Heckling is usually frowned upon. At Rocky, however, it is not only tolerated, but encouraged. Audience members gave great callbacks on Friday night – either anticipating or responding to the action and dialogue – and to tell the truth, as wonderful as the actors were, it was often the callbacks that were the funniest elements of all. I mean, seriously, those people had to know that script inside and out; the vocal responses were so good it seemed as if they had actually been part of the written dialogue.

This show is definitely not for everyone. While it’s not good “clean” fun (and included a few moments that were not really to my taste), it is good fun. My companion and I, when recently bemoaning the state of the world, made an agreement that we would find as much silliness and laughter as we could, and I was glad when she accepted my invitation to join me. Hearing her infectious laugh only made me laugh even more. And after the performance, as I walked out into the balmy October night, my heart felt lighter than it had been in quite some time.

The Rocky Horror Show runs at the Circa '21 Speakeasy (1818 Third Avenue, Rock Island) through October 28, and more information and tickets are available by calling (309)786-7733 extension 2 or visiting TheCirca21Speakeasy.com.