Lost, and Found, in Translation: "Handle with Care," at the Village Theatre through March 4 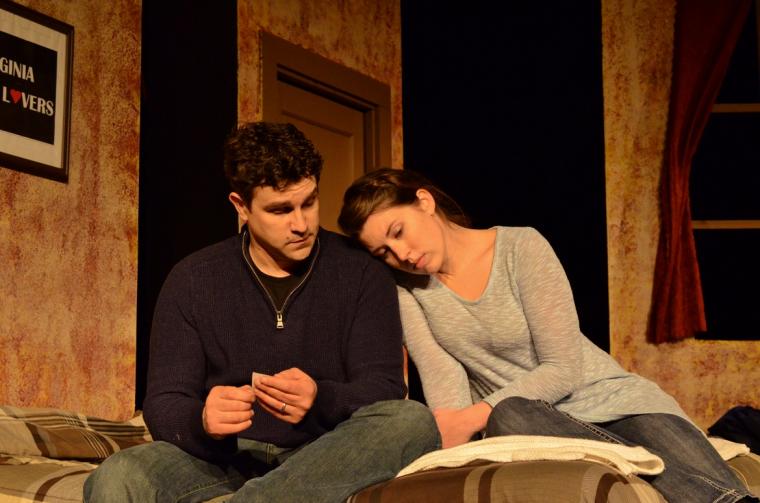 Jordan Smith and Joanna Mills in Handle with Care

Imagine that it’s Christmas Eve and you are Terrence, a delivery-truck driver who, en route to the airport, loses his cargo – the dead body of an elderly Israeli tourist – and you can’t communicate with the woman’s granddaughter, who doesn’t speak English. What do you do? Well, you call your friend Josh who learned to “speak Jewish at his Hare Krishna” and ask him to inform the young Israeli that her grandmother’s body is lost, of course.

This improbable but engaging scenario is the setup in New Ground Theatre’s latest offering: author Jason Odell Williams' Handle With Care. Directed by Christina Myatt, the play is set in a motel room in Goodview, Virginia, and, moving backward and forward through time in non-linear fashion, tells a tale of love lost and unexpectedly found amidst the twists and tangles of fate, and across a severe language barrier. And although the show’s style was a bit too broadly played for my tastes, Myatt has created a production with high energy, brisk and bright pacing, and good comedic timing. 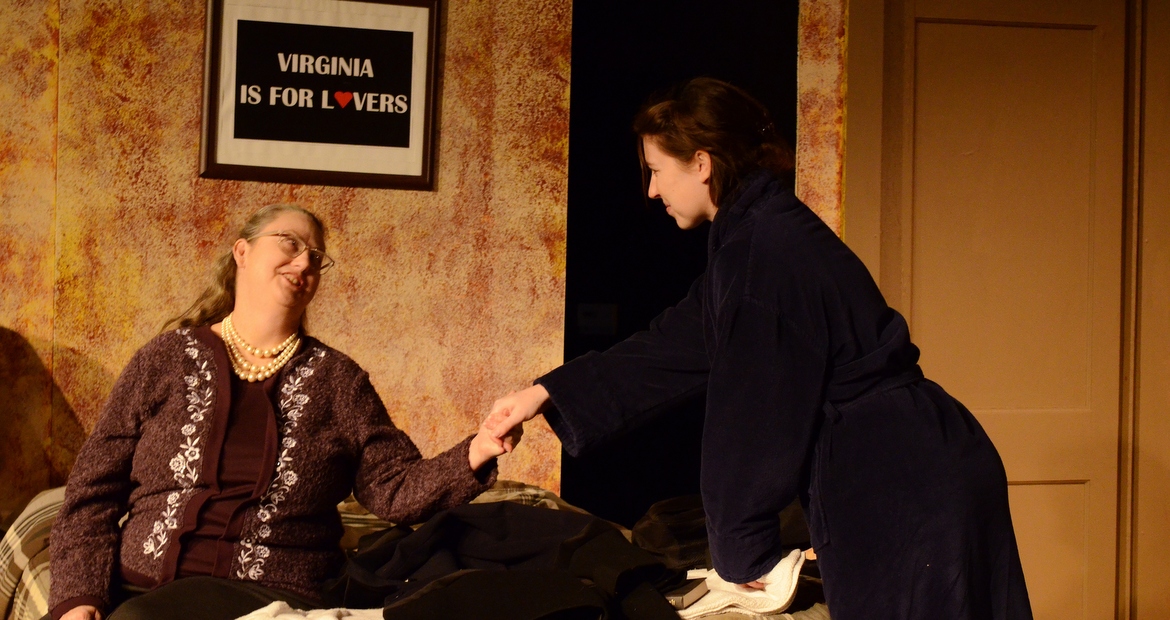 Handle with Care opens with Josh (Jordan Smith) responding to Terrence’s (Jacob Kilburg's) call for help. Josh sets his friend straight: It’s not “Jewish,” but rather Hebrew, and it wasn’t “his Hare Krishna,” but his bar mitzvah. Smith gives his all in portraying Josh, who attempts to communicate with the young Israeli woman Ayelet (Joanna Mills) through rudimentary Hebrew, simplified English, hand gestures, and facial expressions. Smith is very alive and earnest, and has great comedic timing. But although I really enjoy Smith on-stage and think he keeps getting better and better, he has, in my opinion, potential for realizing deeper characterization and more emotional realism than he has displayed to date – including here.

The dynamic between Josh and Terrence, though, is great. Kilburg also delivers funny lines with excellent comedic timing and, while giving us a Southern, working-class, broadly played Terrence, the actor generally manages to stay on the right side of the line between caricature and character.

As the two men discuss their situation, Ayelet looks on in expectation; not knowing any English, she's excited when Josh approaches her, thinking he will speak to her in her own language and clarify just what is going on. His first (and only) Hebrew word is “shalom,” and she gestures in frustration. Yet over time, and after much to-ing and fro-ing and semi-conversing (including Smith’s clever Owen Wilson impersonation), her understanding of English improves a bit, and the plot moves forward in sometimes pleasantly anticipated, sometimes unanticipated, and sometimes improbable ways. 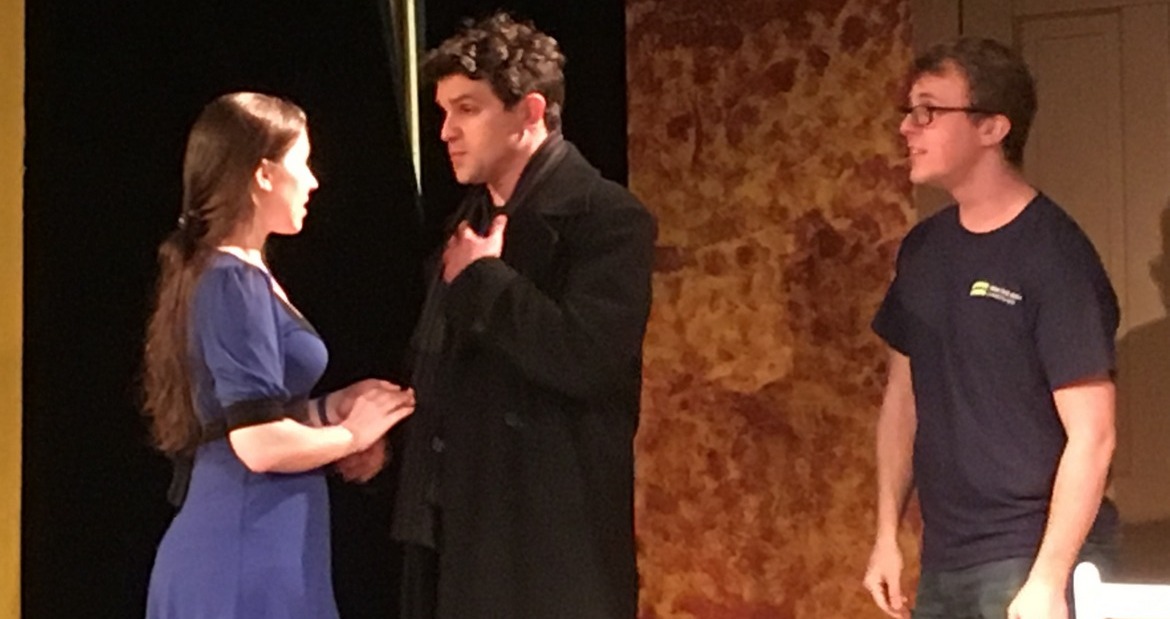 Prior to this show, I had never known of Joanna Mills or how wonderful she is. Although her dialogue with grandmother Edna (Tamra McConoughey) is in English, we understand them to be speaking Hebrew. But in all of her scenes with Josh, she converses only in Hebrew, which is an incredible technical achievement (or so it seemed to me, as I am not conversant in that language). I found myself intrigued by what was going on on-stage – two characters who don’t speak the same language were, it appeared. communicating with, and understanding, each other. Mills is wonderfully natural, and while exuding an energy and tone that fit seamlessly into the style of this production, she also exuded an emotional realism that made her character very true and believable.

For New Ground's production, McConoughey has returned to the stage after many years, and a most welcome return this is. As Handle with Care progresses, we learn the real reason why Edna brought her granddaughter to this small Virginia town and how Edna’s past is affecting her granddaughter’s future, and McConoughey was fun to watch, bringing to her role a cheerful, bouncy, lovable charm. Yet while McConoughey’s portrayal was very nicely done, there was one intimate scene in which, although a soft delivery was called for, I had to strain to hear what she was saying. This was unfortunate and unnecessary, and could have been easily rectified in the rehearsal process.

Other bothersome technicalities included a wall that shook when movement took place on the bed; no sound for the TV being turned on the first time – although there was sound the second time; a phone that sounded like it was ringing somewhere backstage; and a Shabbat meal pulled out of a beaten-up paper bag and composed of unidentifiable items and a large plastic jug of juice. (Yes, a motel-room meal requires improvisation, but this one could've had a touch of class, or at least better presentation – a glass bottle, some cheese, and a couple of apples, perhaps.)

These are details, but details either enhance a sense of reality or detract from it, and the play’s resolution also seemed to me a bit forced. Otherwise, however, New Ground's production of Handle with Care is a good one, and I was definitely entertained.

Handle with Care runs at the Village Theatre (2113 East 11th Street, Davenport) through March 4, and more information and tickets are available by calling (563)326-7529 or visiting New Ground Theatre's Facebook page.