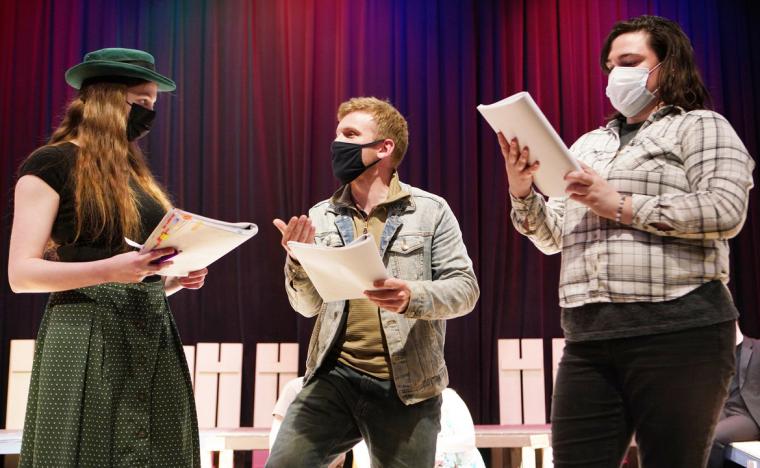 “Love's Labour's Lost" at Carl Sandburg College -- May 7 through 9.

One of William Shakespeare's most delightful yet biting romantic comedies enjoys a springtime outdoor production when students of Carl Sandburg College, from May 7 through 9, present the Bard's Love's Labour's Lost, a much-adored stage work that has also been adapted as an opera, a radio play, and a Kenneth Branagh movie musical.

In Love's Labour's Lost, King Ferdinand of Navarre and three of his followers – Berowne, Longaville, and Dumain – vow to devote themselves to the celibate life of scholarship for three years. Their counterparts, the Princess of France and her attendant ladies Rosaline, Maria, and Kathrine, are subsequently refused entry to Navarre when they arrive, and decide, in an act of giddy revenge, to force the men to break their vows. Each of the men in his turn falls prey to the charms of the ladies, rationalizes their changes of heart in the cleverest academic rhetoric they can write. The women, however, don't allow themselves to be taken quite so easily, and in a comic subplot concerning the eccentric Spaniard Don Armado, the man find a rival for his love of the country girl Jaquenetta with the ridiculous clown Costard. Adding the antics of the pedantic schoolmaster Holofernes and his associate Nathaniel, Shakespeare's romantic comedy delivers a delirious and ultimately moving burlesque of classical material.

Carl Sandburg College's season-ending production is being directed by theatre instrctor Robbie Thompson, with his cast composed of Tyler Bitar, Ryan Bowman, Ashley Cruz, Erin Glasnovich, Greg Herrington, Courtney Howard, Jason LeFebure, April Newman, Matthew Newman, Aidan Nolan, Sonrisa “Sunny” Nolan, Kaitlyn Pleshko, R. Thompson Jr., Johnny Williams III, and Rowan Williamson.. Describing the rehearsal process, Thompson said, “"What I discovered most in our time together is that we do not like to be isolated. I think this play speaks to that bit. Our plans and intentions tend to take a backseat to making meaningful connections, even if we know we shouldn’t.”

Love's Labour's Lost's outdoor production will be presented from May 7 to 9 on the loft patio behind Carl Sandburg College's Building E, and admission is $5 to the 7:30 p.m. performances. Attendance is limited to 50 spectators per show, and more information and reservations are available by calling (309)341-5287 or visiting Sandburg.edu.