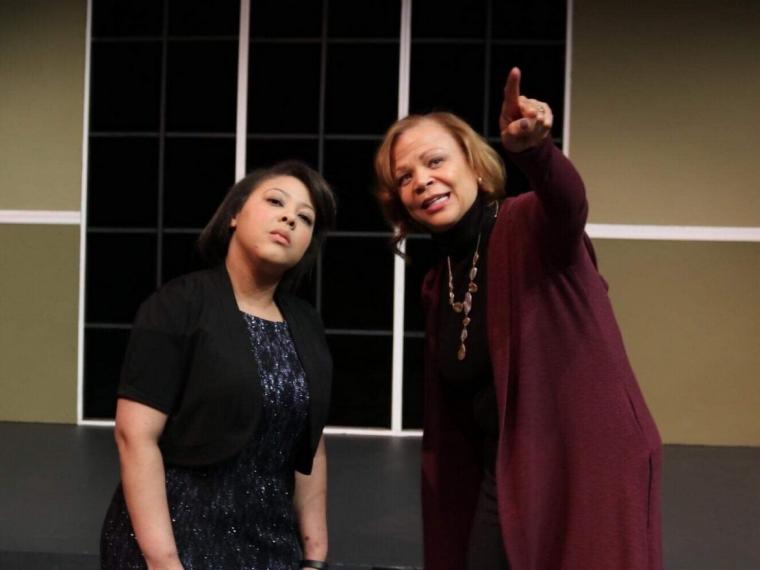 Chelsea Ward and Teresa Moore in "Marie & Rosetta" at the Playcrafters Barn Theatre -- April 12 through 14. (photo by Jesse Mohr)

A two-character musical that Time Out New York deemed “heavenly” while adding “You don't have to be religious to know when you're in the presence of glory,” author George Brant's Marie & Rosetta serves as the latest production in the Playcrafters Barn Theatre's Barn Owl Series, its August 12 through 14 run at the Moline venue introducing – or re-introducing – audiences to the electrifying music pioneer that was Sister Rosetta Tharpe.

A posthumous, 2017 inductee in the Rock and Roll Hall of Fame, Sister Rosetta Tharpe was an African-American singer/songwriter, guitarist, and recording artist who attained popularity in the 1930s and 1940s with her gospel recordings characterized by a unique mixture of spiritual lyrics and rhythmic accompaniment that was a precursor of rock 'n' roll. She was both the first great recording star of gospel music and among the first gospel musicians to appeal to rock and R&B audiences, later referred to as “the Godmother of rock and roll” and an inspiration to artists including Little Richard, Johnny Cash, Car Perkins, Chuck Berry, Elvis Presley, and Jerry Lee Lewis. Tharpe was also a pioneer in her guitar technique, being among the first popular recording artists to use heavy distortion on her electric guitar and presaging the rise of electric blues. Her guitar-playing technique had a profound influence on the development of British blues in the 1960s, and her European tour with Muddy Waters in 1963, with its stop in Manchester, England, has been lauded by prominent British guitarists such as Eric Clapton, Jeff Beck, and Keith Richards.

In 1946, Tharpe saw gospel and R&B singer Marie Knight perform at a Mahalia Jackson concert in New York, where Tharpe recognized a special talent in Knight. Two weeks later, Tharpe showed up at Knight's doorstep inviting her to join her on the road, and the women wound up touring the gospel circuit for a number of years, during which they recorded hits such as “Up Above My Head” and “Gospel Train.” Directed for Playcrafters by Gaye Burnett, Marie & Rosetta chronicles Tharpe's first rehearsal with her young protégée Knight as they prepare to embark on the tour that would establish them as one of the great duos in musical history, and its two-women cast is composed of Teresa Moore (of Playcrafters' 2008 Proposals) as Sister Rosetta Tharpe and venue newcomer Harlow Tweety as Marie Knight.

Marie & Rosetta will be staged April 12 through 14 with performances at 7:30 p.m. on Friday and Saturday and 3 p.m. on Sunday, admission is $5-8, and more information and tickets are available by calling (309)762-0330 or visiting Playcrafters.com.