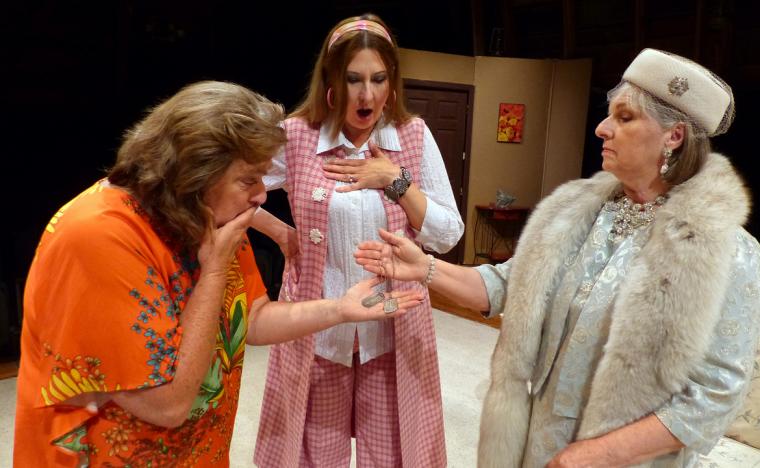 Whenever I visit Geneseo's Richmond Hill Barn Theatre, I'm reminded of how wholesome, welcoming, and beautiful this location in the Midwest is, and how this unique venue is truly a lovely place to take in a show. The players’ latest production, author Jack Sharkey's Missing Link, is a marital comedy full of all kinds of twists and turns, mistaken identities, and romantic conundrums, and it gives patrons a lighthearted look at the things we do for love.

Directed by Joe DePauw, Missing Link tells the story of Belinda “Lindy” Baxter (Mandi Wilson), a woman longing for her lost love Lincoln “Link” Sinclair (Jim Strauss, a.k.a. Kevin Keck) who has been missing since he vanished in the Pacific during World War II. (“Keck” also plays Rance Bickford, but for the sake of those yet to see the performance, I don’t want to spoil things with a full description of his role.) Lindy is now engaged to orthopedist Simon Fletcher (Don Faust), who's fascinated with every bone in her body. On the evening of the wedding, however, Link shows up with an enormous diamond ring and a box of money as his gift for the bride who he thinks is marrying him.

Meanwhile, Canadian reporter Judy Mitchell, portrayed by Jessica Moore, shows up with a strange story about another vanished man while Link's well-to-do mother Augusta Sinclair (Barb Nurmi) arrives trying to determine if this man who has suddenly appeared is really her son. The audience is consequently left to wonder “Who's who?” and “What's what?” 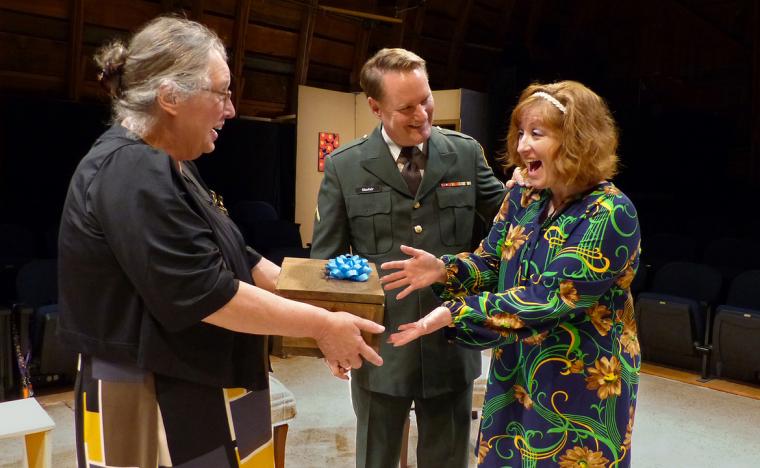 As Missing Link begins, it's June in the mid-1970s, and all of the action takes place in the parlor of the Baxter home in Petoskey, Michigan. Richmond Hill veteran Jackie Skiles is delightful as Belinda’s mother Rose, and Jackie's real-life daughter Dana Skiles is amusing as Fiona Broderick, the maid of honor. But a surprising standout for me was Michaela Giebel-Moore as Miss Beasley, the unassuming yet direct banker who carelessly surrenders a large amount of money to Link without proper identification. Moore’s demeanor was perfect for this role, and her acting chops were apparent.

I also got a kick out of the spot-on era costuming by Suzanne Rakestraw, from the bright-orange leisure suit, white shoes, and Hawaiian-print, large-collared shirt that Keck sported to the bright pantsuits and headbands that Jessica Moore adorned. Also, Dana Skiles’ Fiona had a great pair of peach-colored bell-bottoms that were fanciful, and at one point, Jackie Skiles was dressed in a long, flowing, blue gown that looked like it was transported directly from the ‘70s.

Another feature of the Richmond Hill Barn Theatre that is refreshing to me is the fabulous acoustic sound that allow actors to perform without microphones; with the stage located in the upper barn's center close to the audience, you get a feeling of being a fly on the wall observing the action quietly while being able to hear the dialogue clearly. And because there are four different doors that the performers can enter and exit through, things move seamlessly from scene to scene. 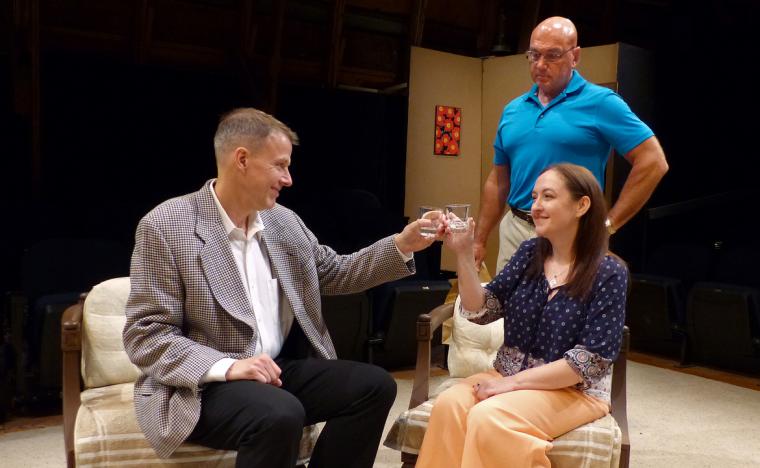 I greatly enjoyed the background music that sound designer Nick Dunk and crew put together that includes classics such as the Carpenter's “We’ve Only Just Begun” and 10cc's “The Things We Do for Love.” These songs brought back a lot of memories for me personally, and were a great choice considering the play's theme. Given the available space, Mollie Schmelzer's set design was sparse but classy, consisting of a few end tables with sofa and chairs, and I also appreciated how the performers precisely navigated such a small playing area while still making the action engaging.

Much of Sharkey's play felt corny to me – which might be what makes it appealing for the majority of its audience. From my end, though, the whole show reminded me of an old 1977 episode of Three’s Company: loaded with shenanigans and silly situations, but not really all that funny. I also thought the line deliveries for the majority of Friday's presentation were choppy and stiff, with the exceptions of just a few players. Admittedly, I had the most fun chatting it up at intermission with a couple of other patrons – elderly gentlemen who appeared to be local farmers – as they shared their real-life stories that could be made into a hit play. Hmmm … . Now there’s an idea.

Missing Link runs at the Richmond Hill Barn Theatre (600 Robinson Drive, Geneseo) through July 21, and more information and tickets are available by calling (309)944-2244 or visiting RHPlayers.com.