The Mississippi Bend Players' “A Green River,” July 5 through 14 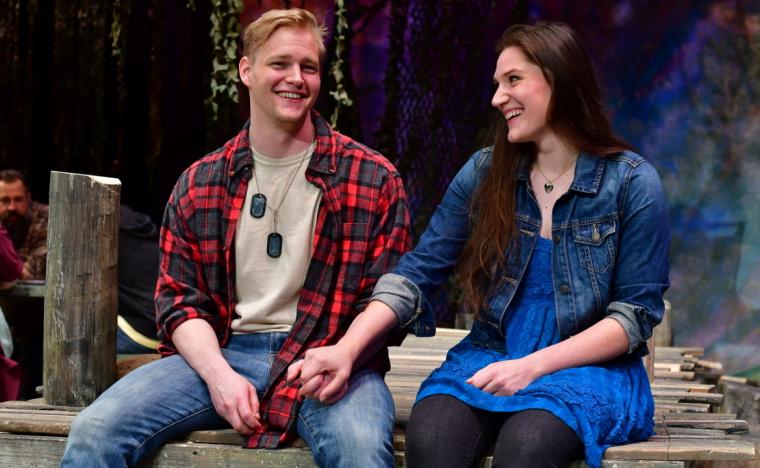 Keenan Odenkirk and Marjorie Gast in the Mississippi Bend Players' "A Green River" at Augustana College -- July 5 through 14.

Directed by acclaimed Broadway veteran Philip Wm. McKinley and written by gifted local playwright Aaron Randolph III, the intense and moving drama A Green River, running July 5 through 14, serves as the second production in the Mississippi Bend Players' military-themed summer season, an exhilarating work described by the River Cities' Reader's Thom White as “not to be missed – not only for being exceptional theatre, but for carrying an important and timely message.”

In A Green River, former football hero and Army soldier Erik White, having been stationed overseas, has returned home to a world he no longer recognizes. Haunted by his past and unable to fully confront his post-traumatic stress, Erik must consequently face the challenges of everyday life – including his relationships with his wife and family – while continuing to struggle with a war he can't leave behind. A breathtaking drama presented in an almost cinematic style, A Green River mixes naturalistic dialogue with a non-linear structure that allows the audience to truly experience a troubled soldier's state of mind, resulting in what the Argus/Dispatch's Jonathan Turner deemed “a powerful, profound play” that is “dead-on, heartrendingly real.”

The Mississippi Bend Players' presentation of A Green River stands as the drama's first professional production, having been previously produced at Davenport's QC Theatre Workshop in July of 2013 and Augustana College that December. With the work's eight-person ensemble on stage for the whole of its intermission-less 90 minutes, this new presentation boasts all-new staging by director McKinley, the MBP's Executive Artistic Director whose Broadway résumé includes Spider-Man: Turn Off the Dark and the Tony-winning The Boy from Oz. McKinley's previous MBP credits include helming 2017's Zombie Prom and last year's world-premiere comedy Beginner's Luck, and additional area productions directed by the artist include the Curtainbox Theatre Company's Wit and St. Ambrose University's world premiere Créme de Coco.

MBP is proud to bring to light the issues facing our veterans as they return home from active duty. To that end, the company is partnering with Quad City Veterans Outreach Center to promote their programs and services, and serve as a donation drop-off point throughout the run of the show. Both monetary donations as well as paper goods (toilet paper, paper towels, Kleenex) and kitchen items (aluminum foil, plastic wrap, Ziploc bags) will be gratefully accepted.

A Green River will be staged at Augustana's Brunner Theatre Center July 5 through 14, with performances at 7:30 p.m. on Fridays and Saturdays and 2 p.m. on Sundays. Tickets are $15-20, with discounted $10 admission for all military and veterans, and each performance will feature a talk-back and Q&A session with military veterans and the show's cast and director. For more information and reservations, call (309)794-7306 or visit MississippiBendPlayers.com.