A Mile-Wide Grimm: “Into the Woods,” at the Timber Lake Playhouse through July 14 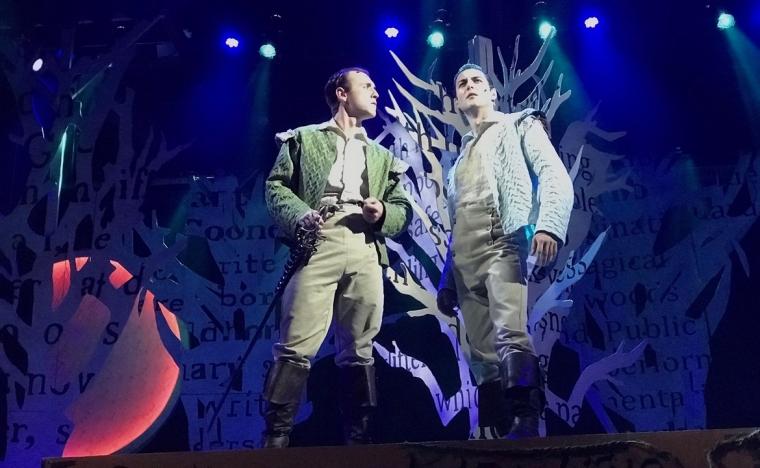 Logan Dolence and Conor Jordan in Into the Woods

What a magical Saturday afternoon I had at the Timber Lake Playhouse enjoying the company's latest summer production of Into the Woods, a storybook brought to life with fabulous fables and folk tales including those of Jack and the Beanstalk, Cinderella, Rapunzel, and Little Red Riding Hood. Directed and choreographed by Paul Stancato, with musical direction by Michael McBride, this charming, melodic creation transports patrons to an enchanted forest filled with colorful characters and a gorgeous moonlit sky. I found myself completely mesmerized and lost within the fantasy of each classic tale while also laughing at the (intentionally) over-dramatic scenes that were just downright fun.

With its music and lyrics by Stephen Sondheim and its book by James Lapine, Into the Woods intertwines the plots of several Brothers Grimm and Charles Perrault fairy tales, following the characters in their wishes, desires, and quests. The story takes off with a childless baker (Dalton Mathis) and his wife (Rebecca Marowitz) who have been cursed by a witch (Altamiece Carolyn Cooper) to whom they have promised specific items including a red cape, blonde hair, and a milky-white cow that will break a spell.

James Tweedale, in his best radio voice, narrates the action under a stage-right spotlight that helps everyone follow the storyline. In the opening scene, we are introduced to the main characters and their plights by each one singing in a distinct group separated by different background scenes and sets. I found Blake West, as Little Red Riding Hood's Wolf, to be quite good as he entered the auditorium slinking through the audience dressed in black leather pants and a vest (by costume designer Zandra Siple) and a whimsical black wig and creative make-up (by Jasmine Elam). West really used his entire body to replicate the sneakiness of a wolf trying not to be seen by his victim Little Red (Olivia Belfie), and his delivery of the song “Hello, Little Girl” was fantastic.

There were plenty of clever one-liners and action in this show, and I absolutely loved Logan Dolence and Conor Jordan as the conceited brotherly princes, each in search of his perfect damsel. The actors did a hilarious version of the song “Agony,” as they are both overcome with terrific angst while explaining their challenges in overcoming and finding the flawless woman. Jordan’s demeanor was hysterical as he stuck his nose ever so high in the air while speaking in a very low, snobbish voice, and Dolence was certainly dashing as he continuously slicked back his hair with a raised eyebrow. 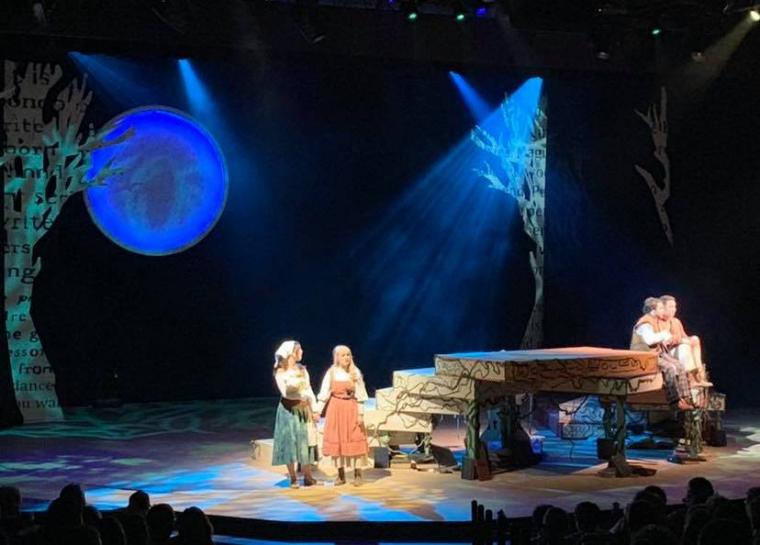 Cooper, as the crotchety old witch, was brilliant, with her piercing singing voice and heartfelt performance especially noteworthy in her song “Witch’s Lament,” and her black hooded robe, curly gray wig, and make-up were topnotch. (It looked as though she was wearing some sort of prosthetic mask.) The entire ensemble, though, was extremely professional-looking, so kudos to Siple and Elam for their excellent work. I also thoroughly enjoyed Ben Dow as Jack, who portrayed his character with a simple childish appeal, and I loved his emotional presentation of “Giants in the Sky.” Meanwhile, Marowitz radiates a wholesome, genuine vibe, and her vocal intonation was beautiful. Paired with Mathis, the two were simply adorable.

This is probably one of the best shows I've had the pleasure of seeing at Timber Lake, with David Goldstein's fantastic scenic design consisting of a large glowing moon that was swung in with wires behind the storybook cutout trees. The creative platform/staircase positioned center stage was fashioned into old books all scattered at an angle with familiar titles and vines growing on the sides of the pages. All of the performers had to have steady feet, because they really had a lot of jumping around to do from stair to stair, especially considering that the stage was also rotating.

Another particularly ingenious effect was when the Big Bad Wolf was situated behind a shadow screen projecting his silhouette as he lured Little Red into her “grandmother’s bed.” Overall, though, the lighting by designer Ben Danielowski was outstanding, the technical direction by Addison Calvin pulled everything together, there was a smoke machine that added a light mist to some of the scenes, and the witch's walking stick shot out small lightning bolts whenever she utilized it for spell casting.

From start to finish, there is something for everyone to appreciate in this creative musical that takes you to faraway lands and mystical places while reminding us that we are never alone on our journeys. Given that the Timber Lake Playhouse is also nestled into a cozy wooded area makes the adventure even more exciting. Into the Woods will captivate your imagination and bring joy to your heart.

Into the Woods runs at the Timber Lake Playhouse (8215 Black Oak Road, Mt. Carroll) through July 14, and more information and tickets are available by calling (815_244-2035 or visiting TimberLakePlayhouse.org.