Mis-Universed: “A Wrinkle in Time,” at the Playcrafters Barn Theatre through November 18 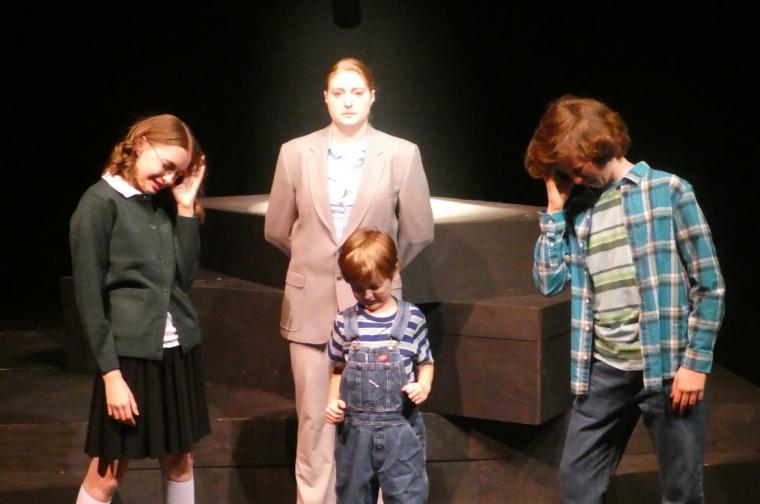 Before attending Friday's performance of the Playcrafters Barn Theatre's A Wrinkle in Time, I knew very little about Madeleine L'Engle's beloved science-fantasy novel, save for the recent movie trailer featuring Oprah Winfrey. And as I watched the near-capacity, all-ages audience file in, I could sense an air of joyful anticipation, not unlike the one you might find at the screening of a Harry Potter movie. But by the end of the performance, I felt confused and more than a little disappointed.

This James Sie adaptation centers on Meg (Bella Kuta), a perpetually under-achieving 13-year-old whose astrophysicist father has gone missing, as well as her Mute (Not mute), mind-reading, five-year-old brother Charles Wallace (Ben Bergthold) and Calvin (Gage McCalester), an older classmate of Meg's. The trio are suddenly teleported to a distant planet by three mysterious entities: the stern Mrs. Which (Elle Winchester), whose voice ethereally echoed every times she spoke; the owlish Mrs. Who (Jazmin Mendez-Barradas), whose dialogue consisted mainly of famous quotations in various languages; and the youthful and effervescent Mrs. Whatsit (Sofia Ortiz). There they visit the Happy Medium (Emily Edens), whose infectious laugh was one of my favorite parts of the performance.

With the help of the three W's, the Happy Medium uses her glowing crystal ball to explain to the children how Meg's father is being held prisoner on the planet Camazotz, a gray and dismal place where conformity is compulsory and whose entire population is ruled by fear and mind control. There they must confront the evil Red Eyes (played with icy precision by Ellie Gradert) and free their father without succumbing to her hypnotic spell.

There were many enjoyable aspects to the performance, not least of which was the ease of interaction between the three young leads. Their playfulness never seemed forced, and it was obvious that both Kuta and McCalester had previous acting experience. Ben Bergthold is also to be highly praised, not only for having to memorize the challenging dialogue of a boy genius, but for his natural comedic timing. Bergthold got the biggest laughs of the performance by far. 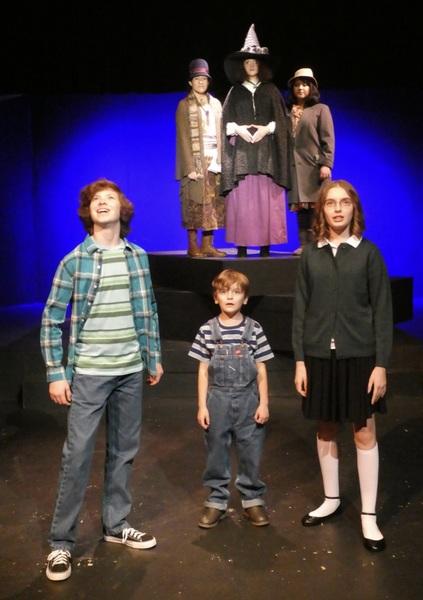 There were a number of endearing little moments throughout the evening, as well. Early in the first act, for example, Meg pantomimes a punch at a school bully (David Cobert) whose reaction was so perfect I could almost feel the punch from my seat. With a few exceptions, the cast did a commendable job of keeping the story moving. And that was the problem.

During the course of the performance, I was continually perplexed by its inconsistencies, both in terms of the script and Jacque Cohoon's direction. In the show's opening minutes, we're told that Meg's little brother can't talk. Mere moments later, though, we see him sitting at the kitchen table holding an intelligent conversation with Meg, who shows absolutely no surprise at his verbal skills. Even later, it's finally revealed that Charles Wallace just didn't want people to realize how smart he is. (Yeah, that explains it.)

At another point, Meg, Charles Wallace, and their mother are sitting around their kitchen table when they're suddenly visited by a mysterious tramp coming out of a raging thunderstorm. She asks the mother to help her remove her rain-soaked boots. Mother obliges and asks Meg to get a bucket to empty the water from the boots. (Meg never gets up from the table.) After the boots are removed, the tramp (actually Mrs. Whatsis in disguise) whispers to Mother that tesseracts actually do exist. (And if you don't know what a tesseract is, don't sweat it. Neither did I.) Consequently, Mrs. Whatsis immediately puts the boots back on and leaves, with her boots never emptied. 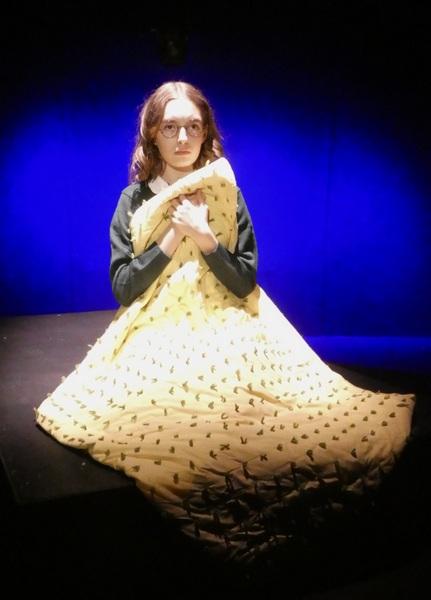 Then there are the references to “the twins” – Meg's and Charles Wallace's siblings – and their pet dog Fort, none of which had any relevance to the narrative except for the benefit of audience members who had read the novel. (Note to aspiring script writers: If it's not part of the story, it doesn't necessarily need to be in the script.)

Compounding the problem of Sie's convoluted script (which invariably happens whenever a full-length novel is condensed into a 90-minute two-act play) were the wireless-mic issues, and last Friday night, there were many. First of all, the performers with mics were turned up so loud that it made it more difficult to hear the actors who weren't amplified. But the biggest tragedy was young Ben Bergthold's mic, which was cutting in and out constantly, making it nearly impossible for me to follow the storyline, and, unfortunately, all but ruined the performance for me.

In her director's notes, Cohoon talks of her love for A Wrinkle in Time and the simple yet important ideals it espoused: that love and kindness can and will conquer hate and despair. While there is no doubt those themes are of the utmost importance during these times of derision, hate, and bigotry, perhaps her closeness to the material has kept her from being able to see it from the eyes of one who has never experienced the novel. Or, as Charles Wallace might say, “The road to Hell is paved with good intentions.”

A Wrinkle in Time runs at the Playcrafters Barn Theatre (4950 35th Avenue, Moline) through November 18, and more information and tickets are available by calling (309)762-0330 or visiting Playcrafters.com.