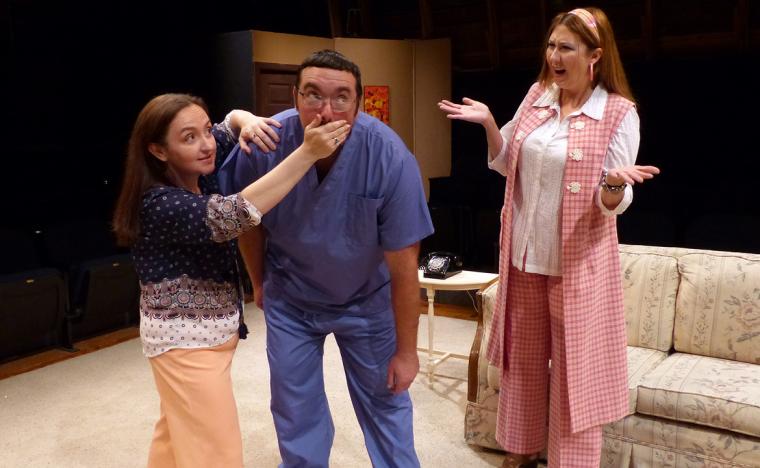 Romantic entanglements, mistaken identities, and loads of laughs will be on hand when Geneseo's Richmond Hill Barn Theatre presents the July 11 through 21 run of playwright Jack Sharkey's Missing Link, a heartwarming and hilarious entertainment by the author of the theatre company's previous hits I Take This Man and 100 Lunches: A Gourmet Comedy.

At the start of Missing Link, Belinda “Lindy” Baxter is missing Lincoln Sinclair. In truth, she's been missing Link since World War II, when he vanished in the Pacific. A fall consequently places Lindy into the hands and arms of orthopedist Simon Fletcher, and they quickly set a wedding date despite her parents' misgivings and the fact that the best man and his sister, the maid of honor, are respectively in love with the prospective bride and the groom. On the wedding's eve, however, Link shows up with an enormous diamond ring and a box of money as his gift for the bride, who he thinks is marrying him. A reporter subsequently comes with a strange story about another vanished man, and Link's mother arrives with a question about an identifying birthmark. Then a cross between an Aborigine and a savage shows up, and he certainly resembles the missing Link – and in more ways than one. Sharkey's farce ultimately leaves audiences rolling in the aisles as they not only as “Who's who?,” but “What's what?”

Missing Link runs at the Richmond Hill Barn Theatre July 11 through 21, with performances at 7:30 p.m. on Thursdays through Saturdays and 3 p.m. on Sundays. Tickets are $12, and more information and reservations are available by calling (309)944-2244 or visiting RHPlayers.com.