Monkey-Trial Business: "Inherit the Wind," at the Richmond Hill Barn Theatre through June 11 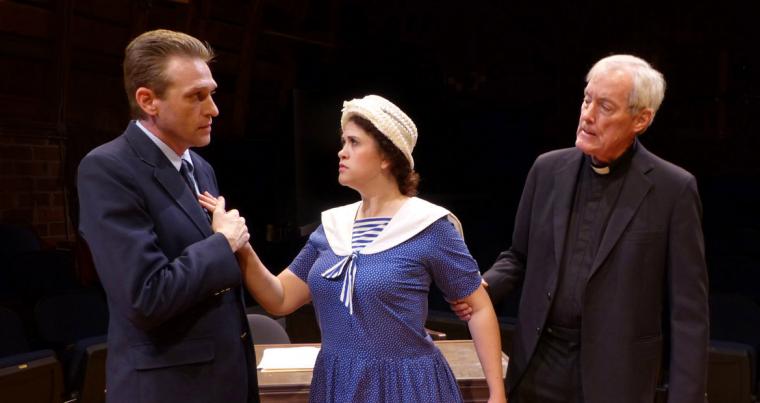 “He that troubles his own house shall inherit the wind.” – Proverbs 11:29

Sometimes a play is written to highlight societal troubles at the time it was written. And sometimes that play gets performed nearly 65 years later, and its message and themes are just as powerful and meaningful now as they were then.

Inherit the Wind, by Jerome Lawrence and Robert E. Lee, centers around a court case – the 1925 Scopes “Monkey” Trial – that is essentially “The Bible v. Creationism,” exploring whether the latter can or should be taught in schools. And while its current presentation at the Richmond Hill Barn Theatre under director Tom Morrow was nicely staged, its emotional weight did not have quite enough Wind in its sails.

Richmond Hill's production opens with school teacher Bertram Cates (Dana Moss-Peterson) meeting his girlfriend Rachel (Elle Winchester) at the jailhouse, where he is being held for teaching Charles Darwin’s theory of evolution. Bertram, a passionate man filled with conviction, is instead played by Moss-Peterson as almost meek and shy. Particularly in the scene that finds Bertram walked out of the courtroom as he shouts about how he's being punished only for trying to teach children to ask questions, the actor's deliveries didn’t have much behind them. As for Rachel, she's a character wrought with confusion as the woman is torn between the man she loves and her father, Reverend Brown (John Donald O’Shea), who is the town's religious leader spearheading the charge against Bertram. Unfortunately, Winchester’s performance also didn’t quite find the emotional weight I felt this character carried. At multiple times in the script, Rachel – deciding how she can testify against Bertram yet stay true to her father – struggles during lines such as “What do I do? Tell me what to do!” But as delivered here, they didn't fully express the painfulness of her situation. 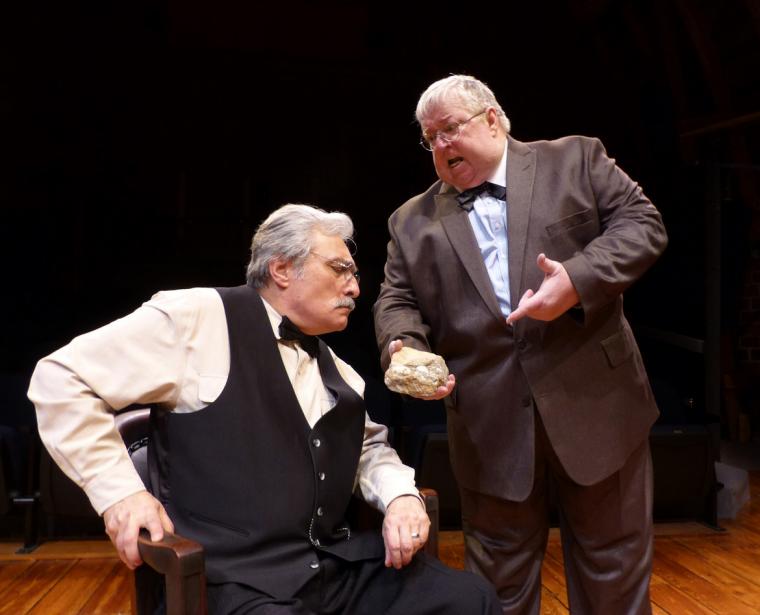 It's when Inherit the Wind's prosecutors Matthew Harrison Brady (Joseph F. Logiudice) and Henry Drummond (John VanDeWoestyne) arrive that the show truly finds its footing and central theme, with both lawyers clearly embodying what it is they're fighting for. While Brady fights for the state of Tennessee and the Bible, this town hero welcomed with cheers, banners, and songs, Logiudice has some powerful speeches that play well against VanDeWoestyne’s quick-witted jabs. And VanDeWoestyne was really the driving force behind June 1's opening-night performance. He treated us to a great portrayal with clear intention and understanding of character, and his character also delivered my favorite line that really shows us who Drummond is: “If you lose the power to laugh, you lose the power to think straight.”

Upon hearing that the the trial's judge (Stan Weimer) won't allow any scientific testimony, Drummond has to improvise his entire defense, and calls Brady to the stand to testify. Drummond then grills him on taking the Bible’s words literally, and while Inherit the Wind puts both the Bible and evolution on trial, the script does a solid job of not necessarily treating any one side as better or “correct.” The “win” in this court case is only a half-win for both sides, and director Morrow clearly had that – and the audience's viewing experience – in mind when staging this script in Richmond Hill's unique-for-the-area theatre-in-the-round. 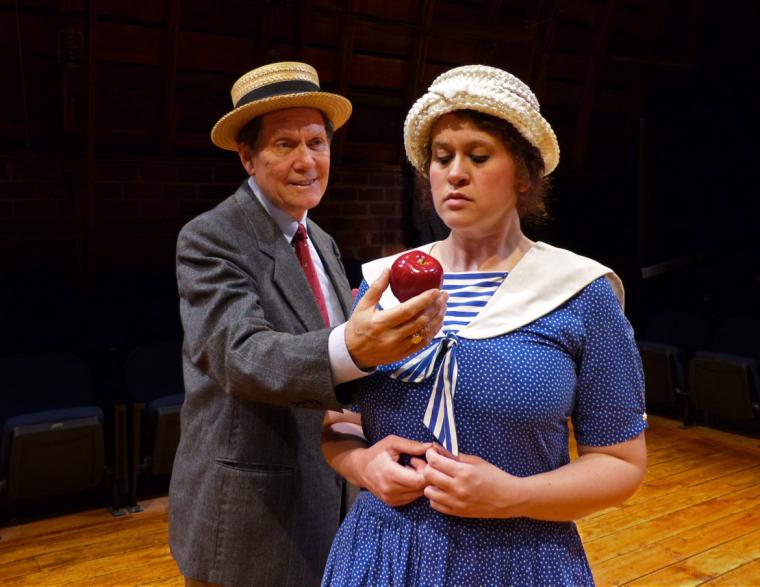 During the intermission break, Morrow's stage crew flipped the courtroom setup so the audience's view was opposite of the one they had been watching, which I appreciated not only for my new vantage point regarding different actors, but as an artistic choice: We were literally given “the other side's” perspective here. Lighting and sound designer Jennifer Kingry, meanwhile, selected wonderful music for the set changes that really established the play's mood and took you back to its mid-'20s time period. Plus, her decision to have lantern lights illuminate the sides of Geneseo's beautiful barn theatre made the whole building feel like a functional set.

Despite the show being less emotional than I would have liked, Inherit the Wind's messages are ones that I think will never stop being relevant, which is partly why this drama continues to be so frequently produced. Question things; seek knowledge; don’t settle on someone else’s beliefs; find your own; and constantly search for truth. In today's world, those suggestions still seem very important.

Inherit the Wind runs at the Richmond Hill Barn Theatre (600 Robinson Drive, Geneseo) through June 11, and more information and tickets are available by calling (309)944-2244 or visiting RHPlayers.com.