Moor and More: "Othello," at Augustana College through October 23 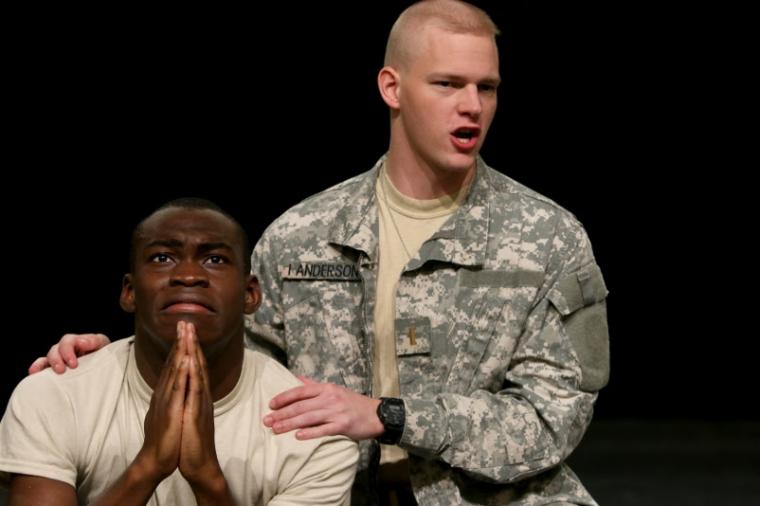 As an Augustana alum of so many years, I was excited to see the opening of the new Brunner Theatre Center on the Augie campus, and especially excited to see its current Othello under the direction of Jeff Coussens. The new theatre facility did not disappoint, and scenic and lighting designers Andy Gutshall and Adam Pfluger, respectively, created a memorable space for the production – minimally designed, yet replete with authentic Arabic graffiti and evocatively low, blue lighting.

My imagination is also easily captivated by the world of Othello – a black-and-white world in which menacing evil contrasts with the highest form of feminine purity, and a magical handkerchief is the key to the fates of all involved. I had seen Othello portrayer Debo Balogun in his great performance in Augie’s January production of Getting Out, and was was eager to see what he could do as Shakespeare's commanding warrior who wrestles with forces vying for conquest of his soul.

As an actor, Balogun can realize depths of intensity and exhibit powerful emotion, and during October 14's Othello, he had great focus, energy, presence, and staying power. Unfortunately, the reach of his imagination was hampered by the limited vision of this production, for what we have here is a more “relevant” world with characters and settings changed to modern American soldiers stationed in war-torn Iraq. Consequently, rather than being an exotic “other” who is full of regal majesty, Othello – although still a general – appears to be just one of the guys with T-shirt, fatigues, and dog tags. (Sadly, in this production, we're also no longer in a world where a handkerchief, "magical" or otherwise, can easily be believed, so the scene wherein Othello cries out “That should have been my handkerchief!” seems almost farcical.) Encounters between Othello and Iago were very believable and compelling. However, Balogun often had a pleading attitude, and Coussens, in my opinion, should have encouraged him to maintain more of a sense of Othello's regal stature – even in scenes in which he's wrought with self-doubt and anguish – because it would've been so much more compelling to have watched the mighty fall from a very great height. The world of Othello is really the world as constructed by the evil genius of Iago, and in this production, Iago is in the very capable hands of Keenan Odenkirk. Thankfully, Odenkirk is on stage a lot, and feeling great confidence in his ability, I could frequently relax and simply enjoy the play. Unfortunately, the world of this Othello is not large enough to encompass an Iago as an over-arching personification of evil, and so we lose a lot of the theatricality that could have been. But even though the actor had to work within the constraints he was given, he did exceptionally well given those constraints. Odenkirk has a tremendous, piercing presence, his character and intentions consistently true, and he displayed a wonderful ability to convey the meaning in the language; I understood practically every word he said (as was unfortunately not the case with most of the rest of the cast).

Tristan Odenkirk (Keenan's brother) was another standout elocution-wise, and his portrayal of Cassio – recently promoted by Othello and, hence, Iago’s arch-rival – was spot-on. His was a portrayal of a sympathetic and decent man caught up in fate unawares, and Coussens' wonderfully choreographed fight scene between Cassio and Montano (Jake Pecaut) was excellently executed by both actors.

Robert Burke had some touching moments as Roderigo … which brings us to some inconsistencies in Augie's production. For example, Roderigo, here, wears a headpiece that would indicate he is an Iraqi, but in a later scene, Iago (an American soldier) cries out to him as his “countryman.” Along the same lines, Bianca (nicely played by Tammy Zapata) is a courtesan, yet was confusingly dressed as a modest Muslim woman in a suit. Although she has a father who appears to be Iraqi, Desdemona (Katie Kleve) appears to be an American, and rather than being a Shakespearean expression of purity and innocence, she's a woman with “attitude,” sporting what, for Iraq, would be most provocative dress. Also unfortunately, there were many instances in which I could not hear or understand her. It wasn’t until a scene very late in the play, with Kleve's beautiful singing of “Willow” and her hair undone, that I felt Desdemona had arrived, albeit much too late.

Meanwhile, Iago’s wife Emilia (Megan Hammerer) is dressed in fatigues and lives in a world in which American women apparently still call their male counterparts “master.” And although Hammerer filled the role with passionate and believable intention and intensity, she also had many moments of unintelligible speech. Unfortunately, rather than being lifted up in a crescendo of desolation, poignancy, and tears, the overall effect of the final scene was, for me, simply anticlimactic.

There may have been Othello productions that have succeeded in bringing Shakespeare’s characters into a present-day world. I don't, however, think that this is one of them. Augustana's rendition contains many smart directorial choices which led to effective staging and very solid pacing, as well as actors who possess many strengths and capabilities. Its overall attempt to make the Bard more “relevant,” though, resulted in a play that, for me, simply diminished the dramatic vision and affective scope of Shakespeare's work.