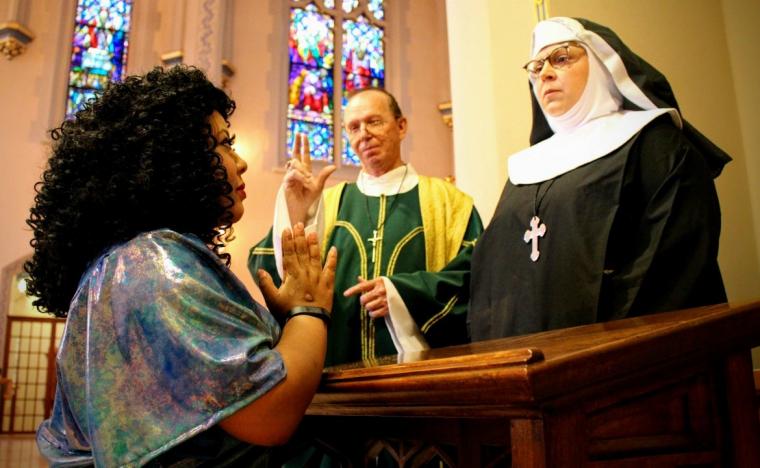 Who doesn't like a singing and dancing nun? Because everyone seemed to be delighted at Thursday night's preview of Quad City Music Guild's Sister Act. The evening was filled with comedy and profound contemplation as the habit-wearing sisters praised the Lord in song and dance proclaiming, "It's good to be a nun!"

With music by Alan Menken, lyrics by Glenn Slater, and a book by Cheri and Bill Steinkellner, Sister Act is based on the 1992 Whoopi Goldberg movie, with the action now taking place in Philadelphia in the 1970s during the disco era. Unlike the movie, in which Goldberg's character convinces the tone-deaf nuns out into the community to do good, here she simply converts them into liberated divas that know how to shake, groove, and jive while they miraculously learn how to sing on key.

Directed by David Blakey, Music Guild's Sister Act begins as aspiring nightclub singer Deloris Van Cartier (Chelsea Ward) walks in on her married lover Curtis Jackson (Tim Dominicus) as he shoots and murders one of his thugs. She then seeks protection from the cop (Sam Whan's Eddie Souther) who has had a crush on her since high school, opening the door to romance. To the dismay and objection of its Mother Superior (Peggy Hamilton), however, Deloris takes part in a witness protection plan and is relocated to the Queen of Angels Convent and Cathedral, going incognito as Sister Mary Clarence. 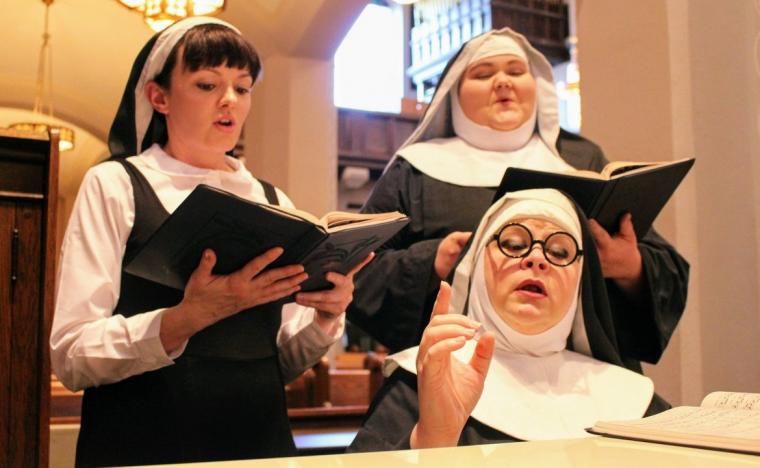 Music Guild's large ensemble of nuns (Stevee Baker, Tammy Baugh, Colleen Callahan, Chris Castle, Maddie McKelvey, Alexandra Minyard, Sarah Naftzger, Jackie Patterson, Anna Schneider, Jen Sondgeroth, and Judy VanDeWoestyne) was fantastic at singing bad during the first half of the show. And then, one by one, each sister really brought her A-game and learned how to sing on pitch with terrific enthusiasm as Van Cartier taught them the ways of rhythm and musicality. Music Director Curtis Fischer-Oelschlaeger did an excellent job utilizing all the ladies’ vocal abilities to the utmost level. Adorned in habits and long robes of various colors and patterns by costume designer Cathy Marsoun, these ladies were totally believable and very funny as they strutted their stuff across the stage, with Kathy Schutter's clever choreography helping bring this musical to life.

I noticed right away, on Thursday, that the orchestra slightly overwhelmed individual singers by being just a tad too loud, which made it difficult to hear certain voices in the cast. Specifically, it felt like Ward’s microphone needed to be turned up a notch or two so we could really hear that beautiful voice of hers. That being said, when the entire ensemble was singing, the blend between the musicians and the singers seemed to work better. And Ward’s carefree and spirited performance was stellar despite the sound issues, and I thoroughly enjoyed watching her bring the funk to the production.

Hamilton, as Mother Superior, was stoic in her delivery of lines, with a very matter-of-fact attitude that was precious. Harold Truitt's Monsignor was brilliantly lovable, and he knocked it out of the park with a bubbly personality that erupted with such joy and enthusiasm that one couldn’t help but smile. (As for his costumes, Marsoun had Truitt decked out in all kinds of colorful clergy attire that really complemented his character.) Marissa Elliott has proven to be one of the most diverse, talented actresses I've seen over this busy summer, and as Sister Mary Patrick, she simply shines – and what a powerhouse voice she has! 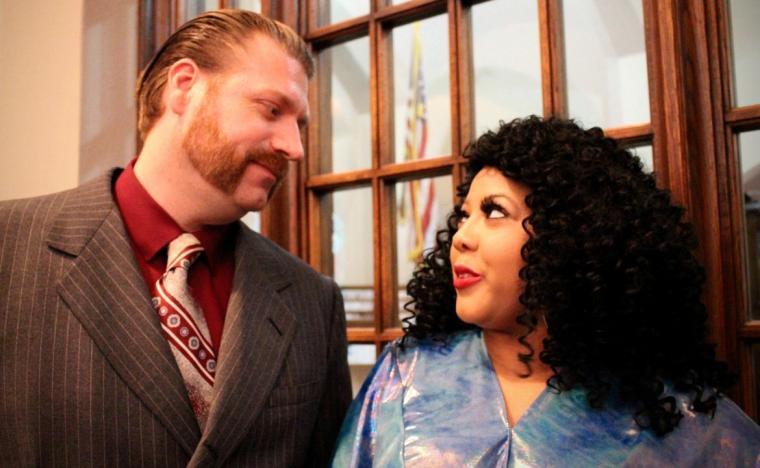 Meanwhile, Abbey Donohoe, as Sister Mary Robert, was over-the-top crazy-good, especially in her solo “The Life I Never Led.” Donohoe is a natural for this part, and I loved her rich intonation as she made me truly believe in what she was singing. Wendy Czekalski's Sister Mary Lazarus (you may have noticed there are a lot of Marys … ) was also a lovely addition to the sisters, and by the end of the production, she was wearing sunglasses and gold chains as she performed a light, hilarious hip-hop number. And playing the murderous villain, Dominicus was believable in his slimy rendition of Curtis Jackson, with his sidekick thugs – Robbie Greve's T.J., Matt Downey's Joey, and Greg O’Neill's Pablo – seeming to enjoy themselves in their respectively over-animated roles.

This show boasted a huge cast, and forgive me for not having the space to write about each individual performer. But from start to finish, I think Music Guild’s take on Sister Act is commendable and worthy, especially if you aren’t too sensitive about some lighthearted comedy that makes fun of religion, and if you're okay with a few race related-comments that, taken in context, should definitely not offend. Besides, an overall message of love, acceptance, and tolerance of all of our differences is this musical's primary motivation.