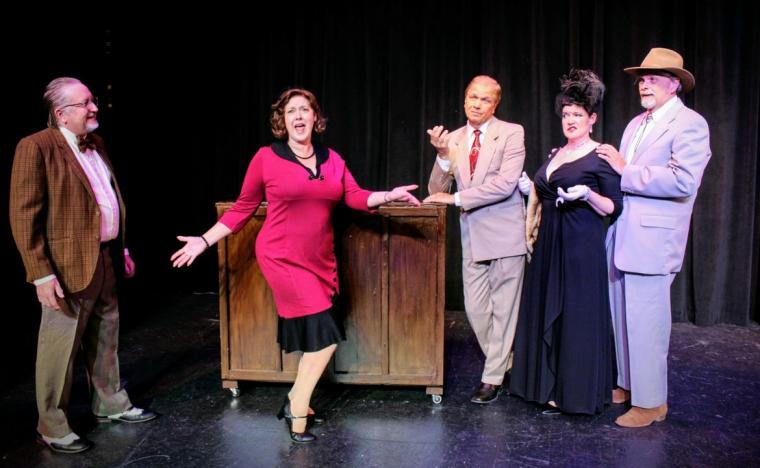 Described by Broadway World as “bursting with show-stopping number after show-stopping number” and by the New York Theatre Guide as “a tap-dancing extravaganza of pure delight,” the exhilarating show-biz salute 42nd Street enjoys a Quad City Music Guild staging at Moline's Prospect Park Auditorium, its July 12 through 21 run demonstrating why this modern stage classic, in its 1980s debut, ran 3,486 Broadway performances and earned Tony Awards for Best Musical and Best Choreography.

One of musical theatre's most beloved and memorable tales, 42nd Street tells the story of Peggy Sawyer, a talented young performer with stars in her eyes who gets her big break on Broadway. Peggy arrives to New York City from her hometown of Allentown, Pennsylvania, armed with her tap shoes and big dreams, and her talent quickly catches the eye of legendary Broadway director Julian Marsh, who gives her a spot in the chorus of his newest show Pretty Lady. Marsh's musical stars Dorothy Brock, an iconic Broadway diva, who takes an instant dislike to the new girl in the cast. When Dorothy is injured during the show’s previews, however, Pretty Lady looks like it will have to close, unless a new girl talented enough to play the lead can be found – someone just like Peggy Sawyer. Peggy’s rise from showgirl to star is the stuff of show-business dreams, and 42nd Street – adapted from the 1933 Hollywood movie musical – is full of crowd-pleasing tap dances and unforgettable songs, among them “Lullaby of Broadway,” “We're in the Money,” “I Only Have Eyes for You,” “Shuffle Off to Buffalo,” and the legendary title tap number.

With the local presentation of 42nd Street, Christina Myatt becomes the first person in the company's long history to both direct and choreograph a Quad City Music Guild production, and Myatt's additional area credits include starring as Norma Desmond in Music Guild's 2017 Sunset Boulevard and playing the doomed Fantine in Countryside Community Theatre's Les Miserables. Amy Trimble serves as music director, having also music directed such recent area musicals as Music Guild's A Chorus Line and the Black Box Theatre's I Love You Because. Peggy Sawyer is portrayed by Carolyn Wher in her first leading role for Music Guild, with Dorothy Brock and Julian Marsh portrayed by longtime venue veterans Erin Platt (Legally Blonde: The Musical, The Drowsy Chaperone) and Kevin Pieper (Thoroughly Modern Millie, Mame).

42nd Street runs at Moline's Prospect Park Auditorium July 12 through 21, with performances at 7:30 p.m. on Fridays and Saturdays and 2 p.m. on Sundays. Admission is $11-16, and more information and tickets are available by calling (309)762-6610 or visiting QCMusicGuild.com.