“I Never Saw Another Butterfly,” January 24 through February 1 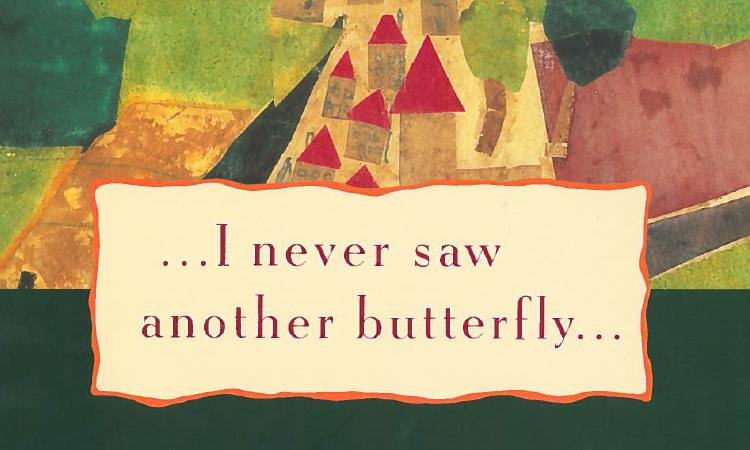 “I Never Saw Another Butterfly" at the Black Box Theatre -- January 24 through February 1.

Described by Broadway Baby as “an emotional, hard-hitting study of innocence lost and the survival of hope in even the most hellish conditions,” author Celeset Raspanti's haunting, moving, and uplifting I Never Saw Another Butterfly serves as the season-opening stage presentation at Moline's Black Box Theatre, its January 24 through February 1 run showcasing the works of art and poetry created by Jewish children who lived in the concentration camp Theresienstadt.

Presented with support from the Jewish Federation of the Quad Cities and its executive director Allan Ross, and based on the book of the same name, I Never Saw Another Butterfly is Raspanti's inspiring story about the use of art in times of tragedy. The story centers around Raja, a young Czech teenager who is forced into Thereisenstadt, a Jewish ghetto that was used as a stopping point for transport to the death camps in the east, including Auschwitz. While many Jewish artists, filmmakers, and others of cultural or political prominence were sent there, the ghetto itself was a miserable place to live, with disease everywhere and starvation the norm. Yet through the eyes of the children who lived in this camp, we see how art helped them not only survive their time in the ghetto, but also how it helped them cope. Raspanti's play is told in memory form by survivor Raja 10 years after the end of the war, with some portions of the story and others acted out as flashbacks in which Raja participates, playing herself as a child. I Never Saw Another Butterfly consequently moves back and forth in time as it reveals information about life in the camp as seen by those who expressed their feelings through drawings, paintings, and the written word.

Directing I Never Saw Another Butterfly is the Black Box Theatre's co-founder and artistic director Lora Adams, whose additional directorial credits for the venue include the 2019 presentations of The Man with Bogart's Face, Silent Sky, and Lady Day at Emerson's Bar & Grill. Laila Haley, who recently appeared in the QC Theatre Workshop's A Doll's House, Part 2 and Quad City Music Guild's A Grand Night for Singing, portrays Raja, with Patti Flaherty and Mischa Hooker playing the girl's parents, Justin Ruefer as Raja's brother, and Dee Canfield as her aunt. Adams' ensemble cast also boasts the participation of Anna Gold, Marley Haley, Jim Harris, Wrigley Mancha, Jaclyn Marta, Ethan D. Mason, Isabel Trulson, Dorothy Turner, and Ethan, Grayson, and Phil Dunbridge. “We are always so honored to have so many actors join us for the first time on the Black Box stage,” says Adams, “and we are very grateful for the generous support of the Jewish Federation of the Quad Cities and Allan Ross.”

I Never Saw Another Butterfly runs at the Black Box Theatre January 24 through February 1 with Thursday through Saturday performances at 7:30 p.m. and Sunday's show at 2 p.m. Admission is $13-16, and more information and tickets are available by calling (563)284-2350 or visiting TheBlackBoxTheatre.com.