“Newsies: The Musical,” January 16 through February 23 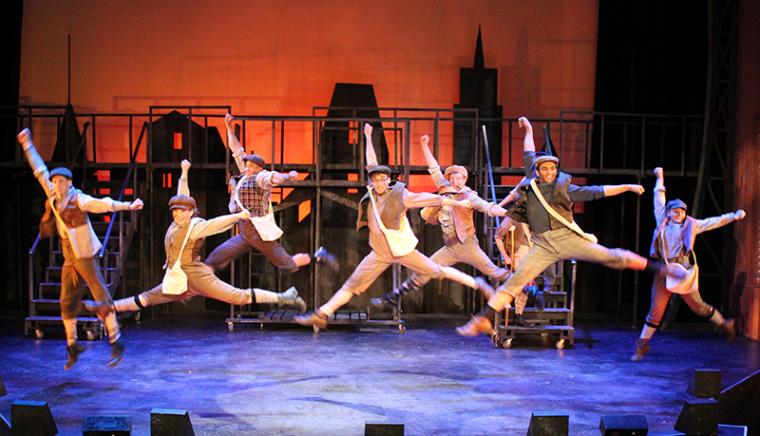 “Newsies: The Musical" at the Circa '21 Dinner Playhouse -- January 16 through February 23.

Described by Variety magazine as “Disney's happiest outing since The Lion King” and by USA Today as a production of “easy infectuousness” and “youthful exuberance,” the Tony Award-winning Newsies: The Musical makes its area debut at the Circa '21 Dinner Playhouse January 16 through February, treating family audiences to an energetic work that the Hollywood Reporter said “adheres to a time-honored Disney tradition of inspirational storytelling in the best possible sense.”

Based on Disney's live-action musical from 1992 that starred a teenage Christian Bale, Newsies: The Musical is set in the New York City of 1899, where young Jack Kelly and his ragtag team of newsboys make a meager living selling newspapers on the streets. But when the prices of “papes” are hiked and the newsies are hung out to dry, there's nothing left to do but, as the lyrics state, “open the gates and seize the day!” Led by the charismatic Jack and the independent newspaper reporter Katherine Plummer, the Newsies form a union and organize a strike against the greedy publisher of the New York World. But can a group of idealistic newsboys win against a foe as powerful as acclaimed publisher Joseph Pulitzer? Inspired by the true story of the 1899 Newsboys Strike, Newsies: The Musical captures the strength that young people have when they join together and stand up against injustice, with its book by Harvey Feirstein and score by Alan Menken and Jack Feldman leading the Village Voice to announce, “Extra! Extra! Newsies is a hit!”

Directing Newsies: The Musical is Jay Cranford, whose recent presentations for Circa '21 have included Les Misérables and Ghost: The Musical, and who will next helm the theatre's summer musical Holiday Inn. Serving as musical director (and a member of the cast) is fellow Circa '21 veteran Travis Smith, whose venue credits include such musicals as Freaky Friday, Ring of Fire, and the recent Pinocchio. And with Noah Lindquist, D'Andre MaKenzie and Kelly Urschel making their Circa '21 debuts in Newsies, the rest of the ensemble is composed of talents making return appearances at the theatre: Derrick Bertram, Joey Boos, Brittany Church, Erin Churchill, Darrington Clark, Danielle Fattore, Trey Gordon, Brad Hauskins, Aaron Heaps, Brooke Myers, Antoinette Nebinger, John Payonk, Michael Penick, Stone Snowden, Tristan Tapscott, and Tom Walljasper.

In addition to its 7:45 p.m. public previews on January 16 and 17, Newsies: The Musical runs January 18 through February 23 with performances on Fridays, Saturdays, and Wednesdays at 7:45 p.m.; Sundays at 5:45 p.m.; and Wednesday afternoons at 1:30 p.m. All shows will be preceded by meals and pre-show entertainment by the theatre's performing wait staff of Circa '21 Bootleggers, and more information and tickets are available by calling (309)786-7733 extension 2 or visiting Circa21.com.