It's Not Easy Fleeing Green: “Murder in Green Meadows,” at the Black Box Theatre through August 28 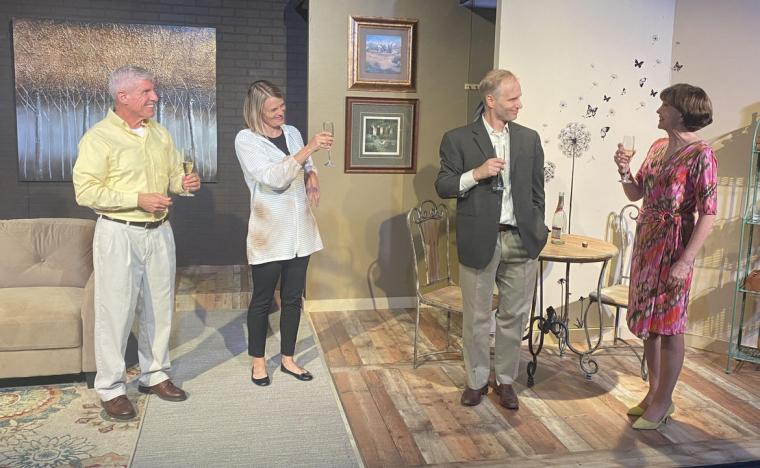 Spending Friday night at the Black Box Theatre was like joining a master class in manipulation with the venue's latest production Murder in Green Meadows. While I wish director Jacqueline Isaacson had been slightly less specific about the number of gunshots in the production during her pre-show announcement, as it became a bit of a spoiler as the night progressed, the evening overall was enjoyable.

Playwright Douglas Post's Murder in Green Meadows finds us in the home of Joan (Jenny Winn) and Thomas (James Driscoll) Deveraux, located in the town of Green Meadows. After their new neighbors Jeff (Jonathan Grafft) and Carolyn (Lora Adams) stop by to introduce themselves, a new friendship is formed. Explaining here how their friendship and relationships develop would pretty much ruin the fun of seeing the show, but here’s a throwaway hint: There’s a murder.

Isaacson is a first-time director and, all told, I found her production well-rounded with a dynamic ensemble as its foursome, as each character had discernible strengths and weaknesses that the cast adeptly embodied. Grafft brought an intangible quality to his performance that made his character Jeff inherently likable, even when I didn’t agree with his choices. Winn’s Joan was meek and forgetful, which, as the plot thickened, seemed to be more the result of marital tension than an actual personality trait, a balanced depiction Winn achieved beautifully. Adams carried an element of naïveté in her portrayal of Carolyn – though, as you come to find out, you should never poke the bear. 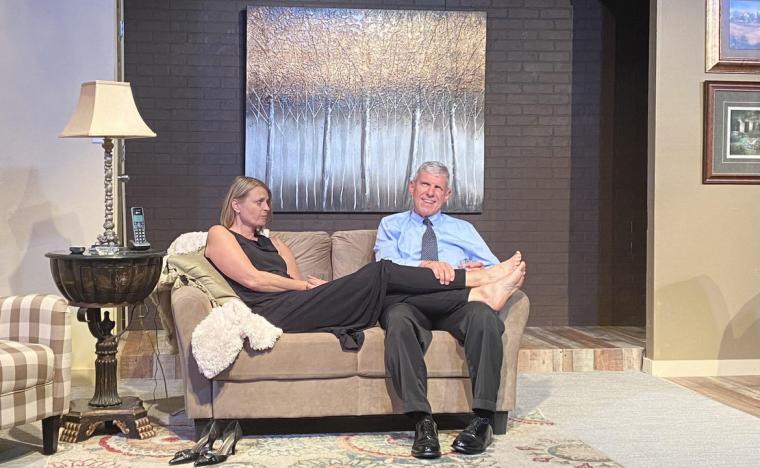 The character of Thomas is Green Meadows' most complex one, requiring an outer intensity that suggests he’s always just a moment away from boiling over, and Driscoll, for the most part, was able to convey that. (I was also impressed by his excellent whistling ability.) However, I didn’t feel as though his character was as conniving as he was meant to be. I’m honestly still unclear about whether or not he committed his admitted heinous act, as both his confession and admission that he was lying were delivered with the same matter-of-fact air. I'm also still unsure if there actually was a neighborhood burglar, or if that was deceit manufactured by Thomas. Driscoll’s performance erred on the side of being “too nice to be evil,” as Thomas requires. But was my uncertainty actually the result of Isaacson’s brilliant direction of this narcissistic character? I’ll let you decide for yourself.

What I found most striking about Murder in Green Meadows was that the entire evening seemed to be missing the element of thrill, as the plot’s air of predictability kept me from fully investing emotionally in the drama. But in truth, this was most welcome to me as a notorious scaredy-cat – simply observing the characters without being at the edge of my seat was an enjoyable experience.

This production did give me and my theatre companion much to talk about: Mainly: What would we have done, perhaps differently, in a similar situation? While it seems unlikely that no one involved in this production has never watched one the many television shows that feature murders and solving them as their main premise, Green Meadows' characters made for terrible murderers and accomplices. While discussing this on our walk outside the theatre, a random guest chimed in, bonding with us about how author Post's cover-up attempt was fairly sloppy in its coordination, with no garbage bag, tarp, or real plan to keep the corpse from leaving a blood trail wherever it went. (Macabre banter, sure, but amusing because it was chance corroboration of our own observation. Thanks, random parking-lot guy!) 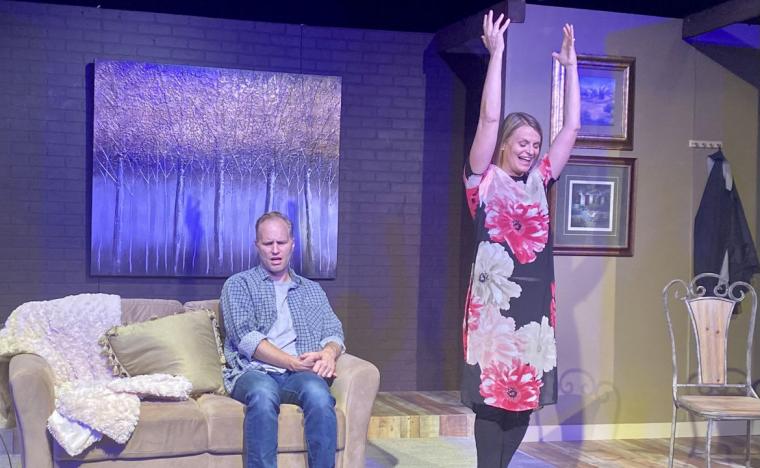 This was a strange production decision because the show's attention to detail was otherwise quite well done – Issacson’s cast came in from the rain with damp shoulders, for instance. And Michael Kopriva constructed a suburban home that incorporated many small, authentic details. I especially appreciated the inclusion of a smoke detector; it caught my eye from the start, and I kept waiting for a scripted moment for it to beep wildly, considering they're not typically included on sets, at least that I’ve ever noticed. (Its inclusion here, though, made perfect sense, as the Deverauxs moved into a model home. This home also featured a large, stunning piece of art on the back wall that, when lit by David Miller, made it appear even more dramatic.)

Timothy X. Troy and Synth Gonzalez created a spot-on sound design that helped elevate the suspense and creepiness of Isaacson’s production. Murder in Green Meadows isn’t at all a whodunit or campy. This production is a more sophisticated web of lies, and while some decisions were questionable and most twists predictable, it kept me entertained throughout the evening.

The Black Box’s Murder in Green Meadows is most unlike anything I’ve seen in area theatre recently, and with its talented cast, beautiful set, and story featuring flawed yet intelligent characters, this was a solid night out at the theatre. Get a group of friends together to see the show, and then debate afterward how you could have gotten away with the crimes of this cast, or how you would have caught them in their lies differently.

Murder in Green Meadows runs at the Black Box Theatre (1623 Fifth Avenue, Moline) through August 28, and more information and tickets are available by calling (563)-284-2350 and visiting TheBlackBoxTheatre.com.