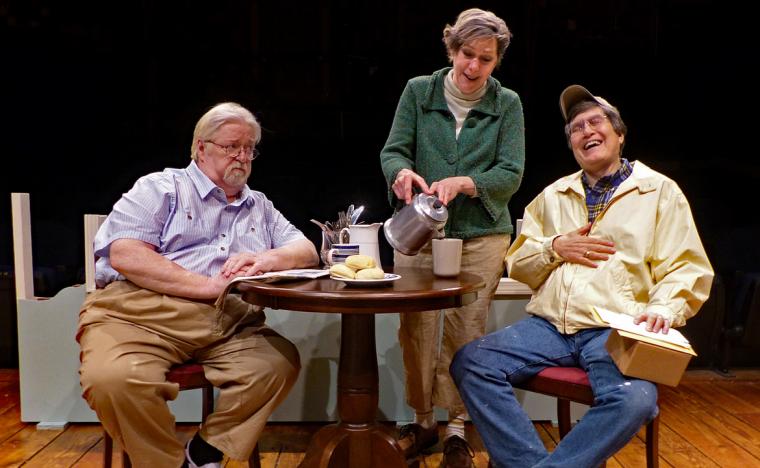 One of the most beloved plays of the 20th Century, and the inspiration for one of the century's most beloved movies, opens the Richmond Hill Barn Theatre's 2019 season in the April 4 through 14 run of author Ernest Thompson's On Golden Pond, the Tony-winning dramatic comedy in which, according to the New York Times, “you will laugh … but you'll also experience the sympathetic ache that comes from sensing another human's awareness of his own mortality.”

Telling the love story of Ethel and Norman Thayer, On Golden Pond finds the married couple returning to their summer home for the 48th year. Norman, a retired professor nearing 80, has heart palpitations and a failing memory, but sill as tart-tonged, observant, and eager for life as ever. Ethel, 10 years younger and the perfect foil for Norman, delights in the small things that have encircled and continue to enrich their long life together. They are eventually visited by their divorced, middle-aged daughter Chelsea and her dentist fiancé Bill, who then go off to Europe, leaving Bill's teenage son Billy behind for the summer. The boy quickly becomes the “grandchild” the elderly couple have longed for, and as Norman revels in taking his ward fishing and thrusting good books at him, he also learns some lessons about modern teenage awareness – and slang – in return. What follows is a timeless tale of love, family, forgiveness, and endurance that has charmed audiences since its 1979 debut, with its 1981 film adaptation an Academy Award recipient for its screenplay and a legendary showcase for its Oscar-winning stars Henry Fonda and Katharine Hepburn.

Directing On Golden Pond for Richmond Hill is area favorite Harold Truitt, an actor from the venue's 2018 Sex Please, We're 60! whose directing credits for Quad City Music Guild have included Joseph & the Amazing Technicolor Dreamcoat, You're a Good Man, Charlie Brown, and last summer's A Chorus Line. Portraying Norman and Ethel are gifted Richmond Hill regulars John VanDeWoestyne and Jackie Patterson – the former of Inherit the Wind and Greater Tuna, the latter from California Suite and The Importance of Being Earnest. And rounding out On Golden Pond's cast are Ann Keeney-Grafft as Chelsea, Gary Talsky as Bill, Joe Mroz as Billy, and Steve Trainor as the Thayer's friendly and frequently guffawing mailman Charlie.

On Golden Pond runs at Geneseo's Richmond Barn Theatre April 4 through 14, with performances at 7:30 on Thursdays through Saturdays and 3 p.m. on Sundays. Admission is $12, and more information and tickets are available by calling (309)944-2244 or visiting RHPlayers.com.