“Peanuts,” Better and Jolly: “You're a Good Man, Charlie Brown,” at the Spotlight Theatre through June 13 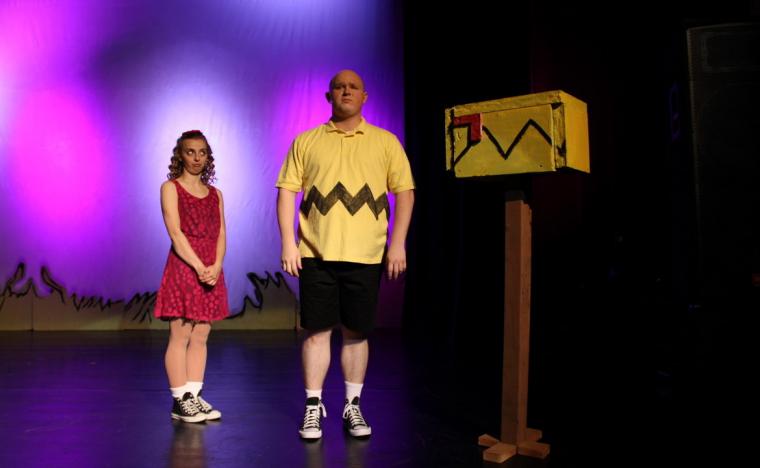 Bethany Sanders and Noah Hill in You're a Good Man, Charlie Brown

Friday was opening night for You’re a Good Man Charlie Brown at the Spotlight Theatre, and it was a crazy, fun evening filled with lighthearted comedy and loaded with some of my favorite area talent. I really enjoyed the simple, childlike playfulness that the entire cast exuded, as it was evident that everyone was having a great time and glad to be back on stage.

Directed and produced by Spotlight co-founders Brent and Sara Tubbs, this show, with its music and lyrics by Clark Gesner, is a wonderful, family-friendly production based on the characters created by cartoonist Charles M. Schulz in his comic strip Peanuts. With Charlie Brown's music direction by Mason Moss, the audience was treated to delightful melodies that were well-blended as the company executed creative choreography by Becca Johnson.

The Tubbs’ set design was crisp and simple, featuring a large white backdrop that at times projected images of the actual cartoon characters as the cast paraded around. Also, the lights were done in a way that allowed for silhouettes to appear in the background, adding more depth and dimension to the scenes. For example, in the kite-flying sequence, a wire was attached to the end of the kite as it appeared to float in the air, and the lighting allowed for a wonderful shadow of the kite in the background. 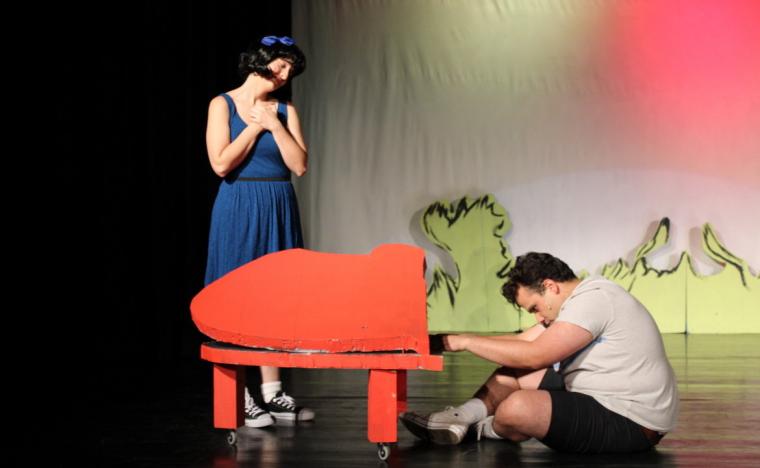 Alexis Lotspeich's costume designs were bright and colorful and appropriate for each character, with Charlie Brown (Noah Hill) – a.k.a. Chuck – in his memorable yellow shirt with a thick, black zig-zag running across its middle. Lotspeich was also inventive with her use of tutu material, using brown tufts of it around Pig Pen’s feet simulating clouds of dust.

Hill sported a bald head that added to the believability of Chuck, the ever-so-insecure boy who you just have to love. The actor did a great job playing this low-key cartoon character who comes across as dry but funny. Meanwhile, Ian Sodawasser, as Snoopy, was hilarious as he lounged atop his dog house howling and snorting away while waiting for his daily feedings, and his performance of “Suppertime” in Act II was quite the dramatic event. I was blown away with the ingenuity and passion he put into his role.

Not to be outdone, Amelia Fischer poured out her heart as Lucy, the wannabe queen of the Peanuts gang. Fischer had a real childlike quality and innocence with her line deliveries that were especially sweet, and her black wig was spot-on cartoony. Adam Sanders, as Schroeder, was fantastic, as he always brings precision, detail, and a high energy vibe to whatever role he tackles. Adam’s real-life wife Bethany Sanders also showed off excellent acting chops as Charlie’s younger sister, the sassy Sally Brown. 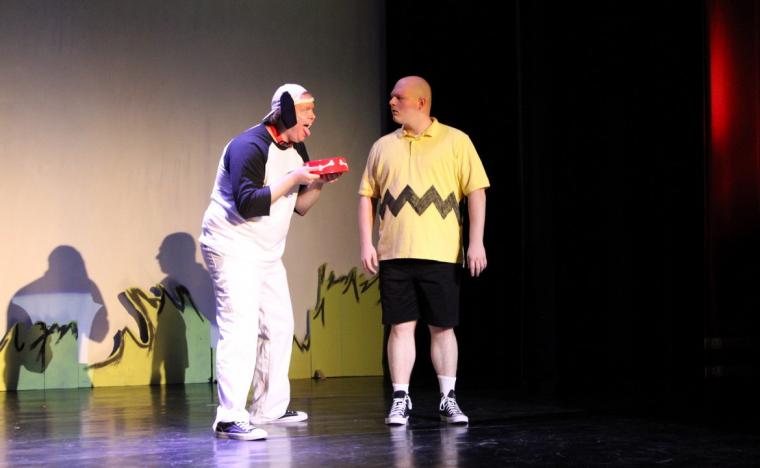 As Linus, Gary Mayfield brought dynamic dancing skills to the charming number “My Blanket and Me,” effortlessly floating across the stage with blanket in tow. He was later joined by the entire, outstanding company, sporting blankets attached to their ankles in a uniquely choreographed piece. And I would be remiss not to mention the remainder of the ensemble, because this Charlie Brown was truly a group effort: Rachel Winter was Marcie; Brennan Hampton appeared as Rerun; Elena Vallejo played Violet; Molly Ahern portrayed Peppermint Patty; Keegan Walker dusted it up as Pig Pen; Bella Kuta stepped in as Frieda; and finally, the adorable Taylor Tubbs nailed it as Woodstock.

Considering they were so well done, the props in this show are also worth mentioning. The Tubbs team had a small wooden red piano that sat close to the floor, allowing Schroeder to sit crouched over it while intensely striking every key in perfect time with corresponding sound effects. Snoopy’s dog house was very cartoon-like – simple, but so cute. And Lucy’s psychiatric stand in her number “The Doctor Is In” resembled a lemonade stand, but was bright yellow with big black writing on it. Oversized wooden pencils were also utilized as the main characters contemplated how to write their own stories while taking notes in small notebooks.

I was impressed by how well-cast everyone was in this production, and each performer remained in character while singing and dancing; they all complemented one another while keeping their individual characters interesting. In addition, the execution of each musical piece seemed flawless to me, and the overall sound quality on Friday night was excellent. I felt like a kid again myself, and it was nice to just sit back, unwind, and enjoy a charming musical that's starting the summer with a bang. So if you're looking for some carefree entertainment to relieve some daily stress, You’re a Good Man Charlie Brown just might be your ticket.

You're a Good Man, Charlie Brown runs at the Spotlight Theatre (1800 Seventh Avenue, Moline IL) through June 13, and more information and tickets are available by calling (309)912-7647 and visiting TheSpotlightTheatreQC.com.