Pinball Wizardry: “The Who's Tommy,” at the Clinton Area Showboat Theatre through August 4 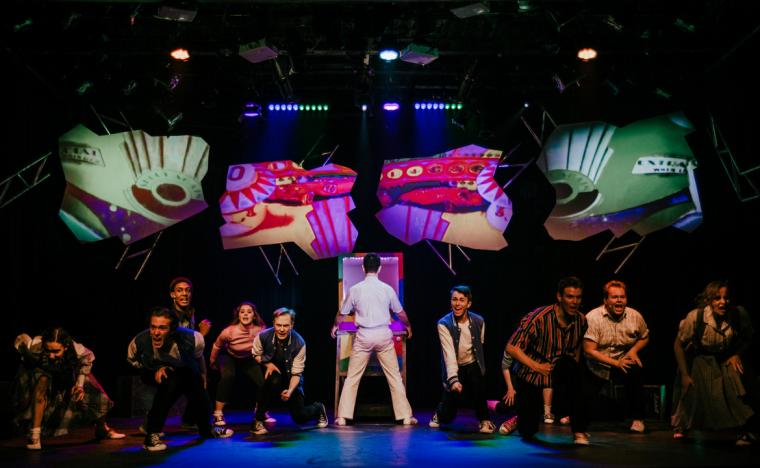 Wesley Mathews and ensemble members in The Who's Tommy

There's a British invasion going on at the Clinton Area Showboat Theatre, and Friday's performance of The Who's Tommy was in your face, intense, and powerful, a rock opera that cranked up the volume on the phenomenal music of one of the most influential groups of the 20th century: English rock band The Who. Boasting music and lyrics by Pete Townshend and a book co-authored by Des McAnuff, the Showboat’s production was fascinating to me, because it tells a story that I wasn’t all that familiar with when I first heard The Who’s songs many years ago.

Set in 1940s London, this work documents the extraordinary life of a boy named Tommy (Wesley Mathews) who witnesses the brutal murder of his mother’s boyfriend by his father Captain Walker (Ben Cherington) while looking through a reflection in the mirror. Mr. and Mrs. Walker (Kathryn Aarons) consequently shake their son violently and scream at him to forget what he just saw. Being traumatized by this horrific event, Tommy begins to perpetually stare into a mirror and apparently becomes deaf, dumb, and blind. Incredibly, though, he finds a passion for pinball, which he proves to be extremely good at, and the locals begin to think of him as some kind of special wizard. And while Mathews' performance is respectable, for me it felt a little forced, lacking that certain magnetic charm that I expected from Tommy. That being said, by the end of the show, the actor appeared to be visibly crying. 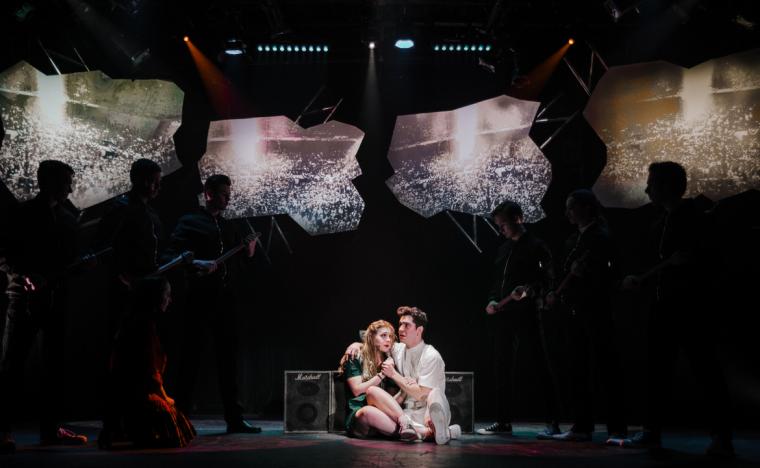 Directed by Matthew Teague Miller, this production felt more like a rock concert than your traditional musical., and I believe that was the whole idea. The scenic design by Anthony Karpinski included abstractly shaped projection screens that lined the back wall, allowing various background scenes to flash throughout a show that also included dates to help the audience follow along with the fast-moving storyline. James Kyle Davis' lighting design is suitably ostentatious and complements the driving beat of the music. The audience consequently gets an inside look at what Tommy’s dysfunctional upbringing is all about, and we see how this affects him through the eyes of a child at four years old and again when he is 10.

Four-year-old Tommy is portrayed by Lillian Asay, an incredible young singer and actress; she was dressed in long white shorts with matching vest and tie by costume designer Rebecca Rankin. Asay also had a short, brown, curly wig, and by looking at her, you would never guess that it was a little girl in this role. Meanwhile, as 10-year-old Tommy, Lucas Asay stepped in dressed identically, and because the two performers appear to be related, the likeness of Tommy growing up was especially convincing. The older Asay did a nice job with his eyes, as he would blink slowly and deliberately, making you believe he was deaf, dumb, and blind. During the song “See Me, Feel Me,” all of the Tommy personae (younger and older) interacted and sang with a lot of soul. During these particular scenes, I felt like the actors really connected with the audience and sang the song in a way that made you feel their characters’ emotions – that need to be healed from a traumatic childhood. Another noteworthy performance is that of Nick Berninger, who portrayed Tommy’s abusive and alcoholic Uncle Ernie, and on Friday, Berninger’s rendition of “Fiddle About” was chilling and frightening. 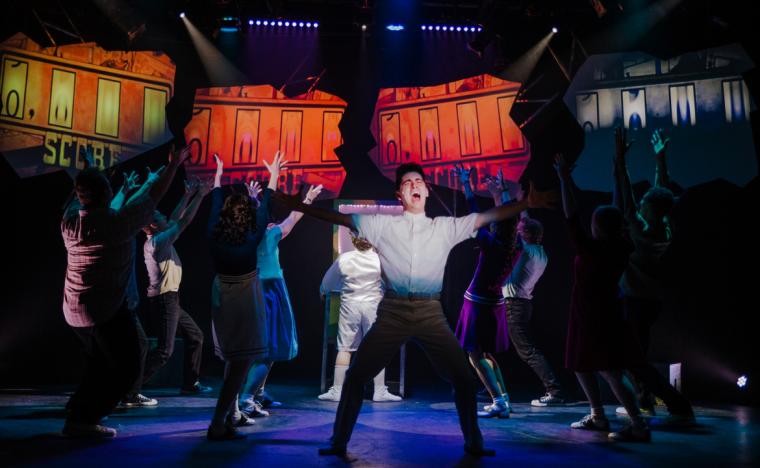 During Tommy’s initial diagnosis, his parents took him to various medical professionals but also visited a group of streetwise ruffians comprised of Hawker (Brandon Burchard) and Harmonica (Ryan Wagner). These two actors were excellent together, in that they both appeared to have fully developed their characters’ attitudes and body language, which were awesome to watch unfold. Burchard, especially, had an ornery smile on his face that just slayed me. And just when you thought it couldn't get any better, along came Allison Winkel's Gypsy and her powerful vocal delivery of the song “The Acid Queen.” This young lady can wail like nobody's business, and I was super-wowed by both her performance and her funky costume that consisted of colorful strips of cloth dangling around her waist that completed her seductive look.

The choreography by Courtney Kattengell is extremely athletic, with members of the ensemble pulling off terrific dance numbers, and the music direction by Laurie Lewis is pivotal to The Who's Tommy's success. As for The Who’s songs themselves, they're fantastic, and include memorable tunes such as “Pinball Wizard,” “I’m Free,” and “We’re Not Gonna Take It.” For me, personally, the sound was turned up a bit too loud on Friday for such an intimate venue, but my ears did finally adjust. I guess that officially makes me old.

The Who's Tommy runs at the Clinton Area Showboat Theatre (311 Riverview Drive, Clinton) through August 4, and more information and tickets are available by calling (563)242-6760 or visiting ClintonShowboat.org.