Pirates and the Caring Being: "Jingle Arrgh the Way," at the Circa '21 Dinner Playhouse through December 26 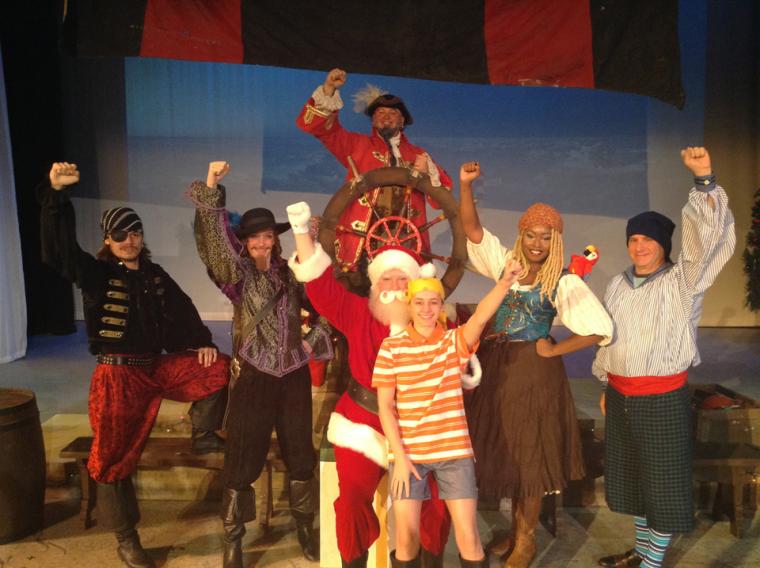 It is, according to a seasonal song, the beginning of that “most wonderful time of the year.” And on the day after Thanksgiving, I, along with my seven-year-old grandson John, attended the opening of the Circa '21 Dinner Playhouse's holiday production in a traditional celebration of … pirates.

Circa '21 has a long-standing history of great children’s programs. In addition, this current show’s book, music, and lyrics are by Janet Yates Vogt and Mark Friedman, the creators of How I Became a Pirate, which previously enjoyed a successful run at the theatre. So I had high expectations. But for me, the big question was whether that presentation's follow-up Jingle Arrgh the Way would be a success in the eyes of my grandson. Director/choreographer Andrea Moore has assembled a charming cast, and her simple yet effective choreography – along with the fabulous costumes by Greg Hiatt, a lighthearted script, and beautiful voices that sang the most delightful music in a wide range of styles including sea shanty, rap, calypso, and show tunes – made that November 25 afternoon a real pleasure.

While constructing a sandcastle on North Beach, Jeremy Jacob (Cydney Roelandt) is visited by the pirate captain Braid Beard (Janos Horvath) and his crew, who need Jeremy's assistance in deciphering a message found in the crow’s nest of their ship. Jeremy boards the vessel with plans to follow a map to the Land of Christmas Snow to help them solve the mystery, but also reminds the pirates that he has to be back in time for his school play.

Scenic designer Clay Becker’s set incorporates a large screen as the backdrop, and there were some great effects projected onto it, among them a view of ocean as the actors rolled around on the stage to convey the rolling of the ship in stormy seas (although even stormier seas would have been more appropriate). And later in the show, a large curtain effectively set the stage for the school play. However, the pirate ship was represented by a large ship’s wheel atop a series of large black wooden boxes, and I found the space ill-defined. Meanwhile, when a prop was needed, the cast simply went backstage and brought it out, which, for me, made it even more difficult to believe in the illusion of a ship. Nevertheless, I very much enjoyed the antics and songs while aboard Jingle Arrgh the Way, especially the great number wherein Jeremy teaches the crew how to play basketball. I was also in good company with all the pirates: Swill (Brad Hauskins), who, in his Cockney accent, spouted out encyclopedic bits of information such as the molecular construction of snowflakes and the creation of plastic; the French pirate Pierre (Sarah Hayes), who sang about cooking and cut a dashing swath in a Musketeer-style costume; Max (Antoinette Holman), with a Jamaican accent and stuffed parrot on her shoulder (a bird that she thinks is real); and Sharktooth (Anthony Natarelli), who belted out the wonderful number “I’m a Star” and performed a great take on the Sugar Plum Fairy.

Upon arriving at the North Pole, we meet Santa (Nicholas Munson), who, in his physique, beard, and red suit, bears a resemblance to the captain, and they sing an entertaining song about being “Twin Sons from Two Different Mothers.” It is through Santa that we learn the meaning in the secret message, and it is Santa who convinces the pirates to go beyond their comfort zones and lend some much-needed assistance to Jeremy and his school play.

After the show ended, when John was asked about his favorite part of Circa '21's musical, he replied, “The beginning, and the middle, and the end.” There’s the review that really counts! So, avast ye mateys and head for the good ship Jingle Arrgh the Way for some lovely holiday entertainment that the entire family is sure to enjoy.

Jingle Arrgh the Way runs at the Circa '21 Dinner Playhouse (1828 Third Avenue, Rock Island) through December 26, and more information and tickets are available by calling (309)786-7733 extension 2 or visiting Circa21.com.