Play It Again (and Again and Again), Sam: “Constellations,” at the Clinton Area Showboat Theatre through August 14 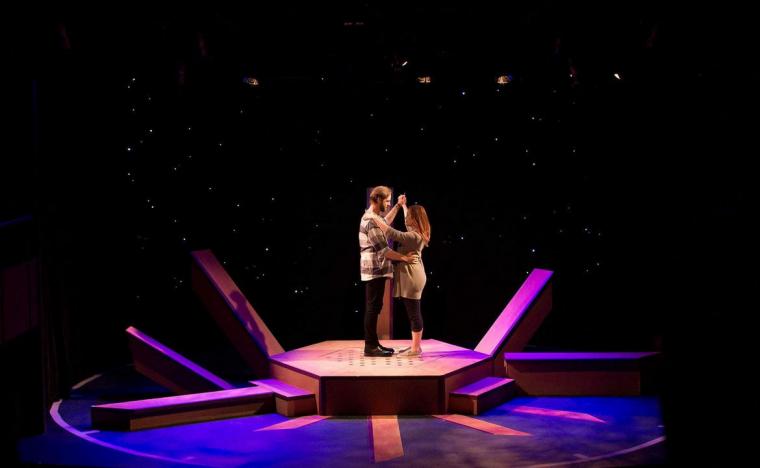 Does everything that happens to us happen by chance? Or could our reactions to life’s events change their outcomes in small or large ways? (I've heard it said before that what might break one person may actually strengthen another, and although we cannot control outside events or circumstances, we can choose how we react.) These thought-provoking questions came to mind as I finished watching Sunday’s matinée performance of playwright Nick Payne’s Constellations, now playing at the Clinton Area Showboat Theatre.

Directed by James Beaudry, this play follows the romance between Marianne (Alexandra E. Palkovic) and Roland (Jess Ford), who meet by chance at a barbecue. The audience is subsequently taken on a journey through the couples’ relationship, watching the infinite possibilities of what their life together might be like as the actors perform the same scene over and over again, but with slight differences each time. It was kind of like a version of Groundhog Day, but with its brief scenes repeated, often with different outcomes. 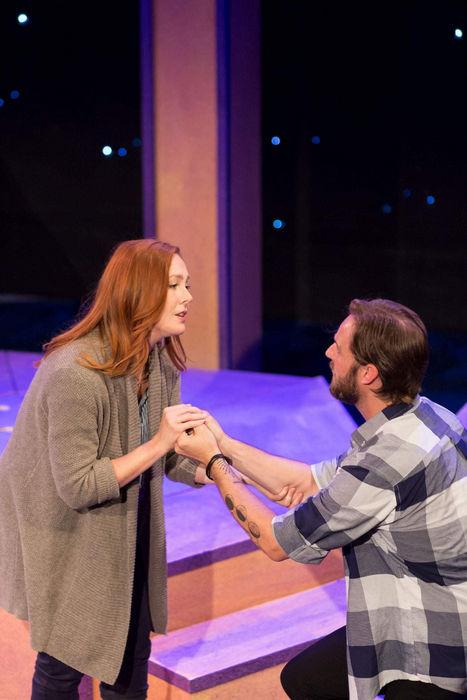 After their first date, Marianne tries to explain her work in quantum mechanics to Roland. “We’re part of a multiverse,” she says. “At any given moment, several outcomes can coexist simultaneously.” This idea of parallel universes sounded fascinating – but was a little farfetched for my tastes. And while Constellations was fast-paced and unlike anything I had ever seen before, what bothered me was the sheer repetitiveness of each scene. At times, I found myself almost dizzy, because I could not process the continual changing emotions and scenarios that were speeding by. The concept was interesting, but the storyline was hard to follow, and I don’t think I really understood what was going on much of the time. It just wasn't my cup of tea.

(I should add that beyond the awkward relationship moments, there were references to infidelity, disease, and death – all of which were reminders of the frailty of mankind – as well as adult situations and frequent “F” bombs, so I would caution bringing youngsters.)

That being said, I can appreciate the tremendous amount of concentration and talent it took to pull off Constellations, even if the show didn’t work for me. The actors had to be able to turn on and off their emotions on a dime. One minute they're laughing, then crying, then angry, then joyful, then pensive, and so on, and the emotional flips did make me think about my own behavior and how I react to other people or situations at times. There have been moments in my own life in which I've regretted getting angry, or have wished I would've handled something differently, and have wondered how things would have turned out if I had just controlled my feelings better. 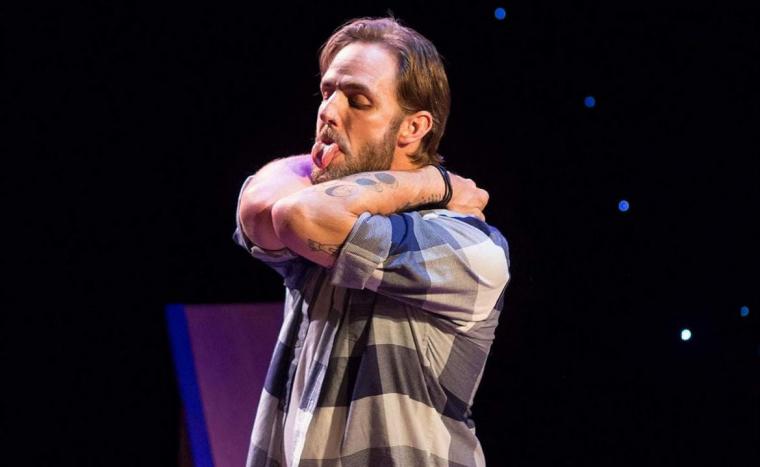 Both Palkovic and Ford made strong use of body language in conveying specific emotions within each scene, with the performers' physical expressions, posture, mannerisms, eye contact, and gestures well communicated throughout. Many experts, after all, believe that we reveal ourselves more through our externals than through what we actually say, which may be why I found myself watching the actors' physical presences more than I listened to their dialogue. At one point, Palkovic and Ford even performed through sign language (Molly O’Donnell served as sign-language consultant), which did add some diversity into the scenes' repetitiveness.

And the scenic design by Brian C. Seckfort was lovely, with warm glowing stars sparkling upon a black background. The set boasted a wooden platform that was kind of unusual – it sort of looked like a spaceship's launching pad, with extended branches or beams that sat at different levels – and as the performers circled around the platform, it was highlighted in different spectra by lighting designers James Kyle Davis and Samuel Verdino.

A short show running approximately 75 minutes without an intermission, the Clinton Showboat’s Constellations was well done, but just too sophisticated for me. In truth, its abrupt scene and mood fluctuations left me exhausted and ready for a nap.

Constellations runs at the Clinton Area Showboat Theatre (311 Riverview Drive, Clinton) through August 14, and more information and tickets are available by calling (563)242-6760 and visiting ClintonShowboat.org.