“The Play That Goes Wrong,” January 19 through March 12 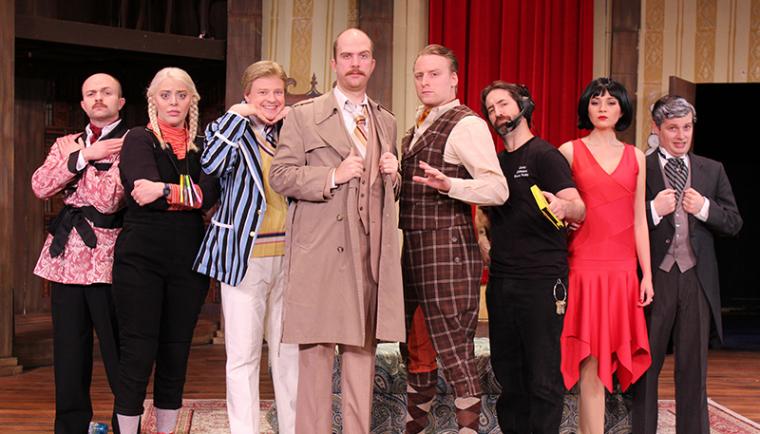 With The Telegraph reviewer Tim Walker stating, “I have seldom, if ever, heard louder or more sustained laughter in a theatre,” the object of that praise – the Tony-winning slapstick farce The Play That Goes Wrong – makes its area debut at the Circa '21 Dinner Playhouse, the show's January 19 through March 12 Rock Island run sure to demonstrate why the New York Times deemed it “a knockabout farce” whose audience “roared as loudly as the crowds at any wrestling match.”

Written by Jonathan Sayer, Henry Lewis, and Henry Shields, The Play That Goes Wrong welcomes patrons to opening night of community theatre troupe the Cornley Polytechnic Drama Society’s newest production of an Agatha Christie-like 1920s murder mystery titled The Murder at Haversham Manor, where events are quickly going from bad to utterly disastrous. The set, props, lighting and sound thwart the performers at every turn, and eventually, a few of these semi-amateur thespians, demoralized by disaster, go rogue. It’s a stage manager’s worst nightmare ... but an audience’s cue for laughter. With an unconscious leading lady, a corpse that can’t play dead, and actors who trip over everything (including their lines), the accident-prone participants battle against all odds to make it through to their final curtain in a work lauded by the Los Angeles Times for "the hilarity of a troupe that unfailingly turns can-do into can-don’t."

In addition to its preview performances on January 19 and 20, The Play That Goes Wrong will be performed January 21 through March 12 with performances on Fridays, Saturdays, and Wednesdays at 7:45 p.m.; Sundays at 5:45 p.m.; and Wednesday afternoons at 1:30 p.m. All shows will be preceded by meals and pre-show entertainment by the theatre's performing wait staff of Circa '21 Bootleggers, and more information and tickets are available by calling (309)786-7733 extension 2 and visiting Circa21.com.