Take the Plunge: "The Dixie Swim Club," at the Playcrafters Barn Theatre through July 23 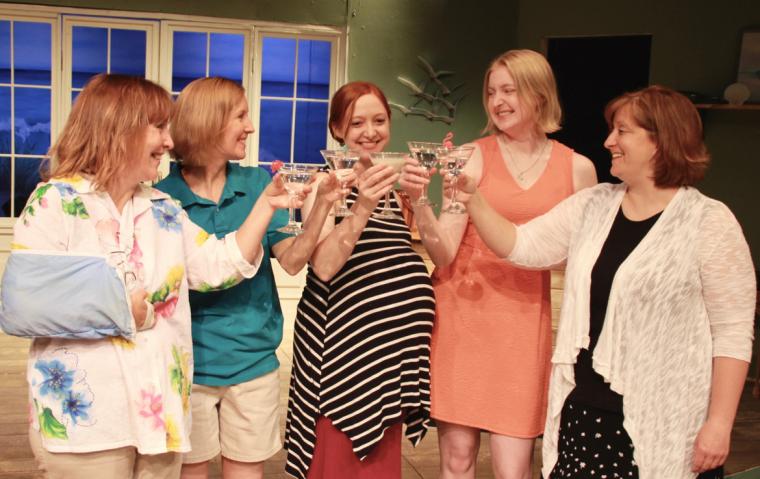 “The faster we swim, the sooner we win!” is the mantra of the five characters in The Dixie Swim Club, the latest production at the Playcrafters Barn Theatre. Written by Jessie Jones, Nicholas Hope, and Jamie Wooten, this comedy tells of five Southern women who bonded while on a championship college swim team and now reunite every August for beach-cottage weekends on North Carolina’s Outer Banks. With its focus on gatherings held when the women are 44, 49, 54, and 77, the script requires quick repartee and timing, and under the direction of Jacque Cohoon, the stage quintet does not disappoint. At the July 11 preview performance, in fact, the audience's laughter came so often, and was so hearty, that the actresses – complete with Southern accents and charm – had to sometimes wait for it to die down, although they consistently kept the pace lively and energetic.

Craig Cohoon, listed in the program as “set builder,” and scenic painter Crista Ashcraft immediately established a relaxed tone with their beach-house set. Suitably airy and not overdone with seashells and fish motifs, it comprised three specific areas: a porch with a table and two sun-bleached rocking chairs; an inviting living room with side tables and three comfy chairs; and a slightly raised level with a well-stocked bar. Most impressive was the view through the French doors on the back wall: a painted beachfront backdrop with tall grass and large waves against an open sky, beautifully enhanced by lighting designer Bill Peiffer. Depending on the time, mood, and weather, that ocean sky could boast a pink hue, or a light or dark blue one, or, for a stormy scene, a threatening purple, and I always appreciate when a production provides these sorts of extra details to enhance the theatre experience. 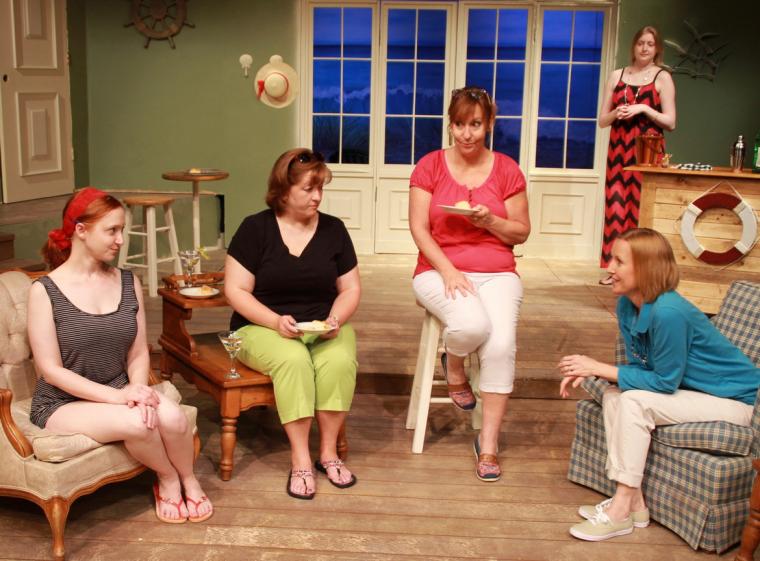 The Dixie Swim Club's cast, meanwhile, does a fine job of establishing distinct personalities. Sara Kutzli is Sheree, the former team captain who still feels it necessary to organize everything from what the gals do to what they eat (including her inedible health-food treats), and the performer is convincing as a woman with a happy middle-class life and seemingly no problems. In contrast is self-centered Lexie, perfectly played by Ellie Gradert, who oozes Southern charm as she goes through four husbands, several hair colors and styles, and numerous cosmetic surgeries, providing humorous fodder for the others.

As the successful, martini-drinking lawyer Dinah, Mandi Wilson portrayed her character skillfully, suggesting a wisdom that the others don’t possess; although she's fun-loving, Dinah has hints of toughness, and unlike her friends, she isn't very forthcoming about her personal life. Among Dixie Swim Club's ensemble, Stephanie Moeller, as the former nun Jeri, appeared the most comfortable with her Southern accent and most natural in her flawless line deliveries. I must confess, though, that I was a bit distracted by her strong resemblance to actress Jayma Mays (the counselor on TV's Glee), and although Moeller’s acting couldn't be faulted in the play's final scene, she did not look 77 years old. 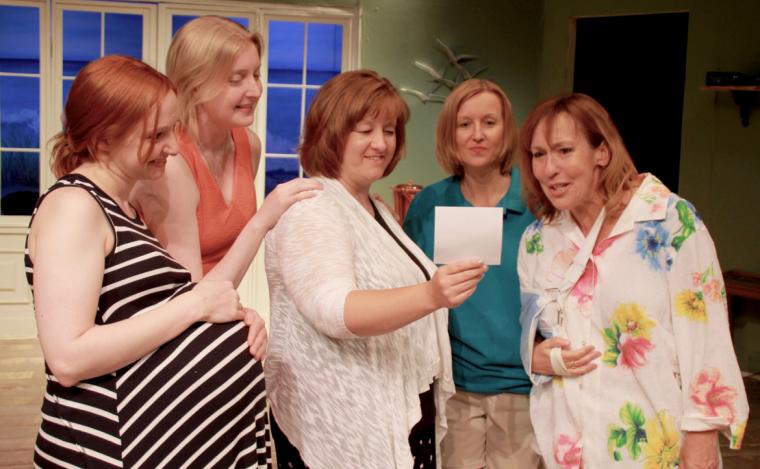 There were, however, no distractions on my part whenever Jackie Madunic entered as Vernadette, considering the performer gets some of the best lines in the show and offers deliveries to match. A woman with a son in prison, a lost daughter, and a lowlife husband, Vernadette shows up at every get-together with some kind of injury and accompanying hard-luck story explaining it, and Madunic comes through with great comedic timing and facial expressions. On July 11, she showed particular enjoyment in her material when egging on her arguing friends, but was at her best when emoting about the honorable place of biscuits in Southern culture, a bit that earned Madunic rousing applause from our crowd.

Jones, Hope, and Wooten don’t really delve into the gravity of some of their topics – such as the real reason Vernadette always has injuries – and even though their comedy is meant to be lighthearted, this may bother some people. Yet there are still serious and touching moments that give the show heart, while the humor and eccentric characters make it relatable and entertaining. As in real life, the play's friends try to navigate the sometimes-choppy waters of relationships, family, jobs, finances, illness, and death … and find they can do so if they keep swimming together. May we all be as lucky as the Dixie Swim Club ladies in having similar friends to keep us afloat.

The Dixie Swim Club runs at the Playcrafters Barn Theatre (4950 35th Avenue, Moline) through July 23, and more information and tickets are available by calling (309)762-0330 or visiting Playcrafters.com.