Port-au-Princesses: “Disenchanted!”, at the Circa '21 Dinner Playhouse through November 6 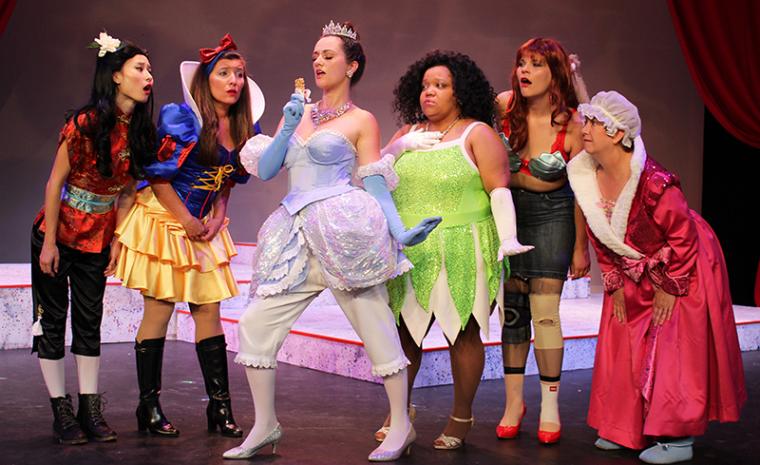 I was delighted to catch Friday’s opening-night performance of the new musical comedy Disenchanted! at the Circa ’21 Dinner Playhouse. Directed by Corinne Johnson, with musical direction by Ron May, this show is about the other sides – more disgruntled sides – of the lives of fairytale characters made famous through the wonderful world of Walt Disney, with Snow White and her gang of dissatisfied co-princesses venting their frustrations as storybook/movie characters.

I thought the flier I received in the mail from Circa '21 described the presentation well: “Forget the princesses you think you know – these royal renegades have tossed off their tiaras to set the record straight about their 'happily ever after' in this outrageous, not-for-the-kiddies musical.” With its book, music, and lyrics by Dennis T. Giacino, Disenchanted! kept my interest and also really cracked me up. At one point, we even had an audience sing-off to the number “Not Vone Red Cent,” the princesses' complaint for not being paid royalties.

Six lovely and powerful women took the stage on Friday and delivered an extremely entertaining experience. Kim Kurtenbach, as Snow White, was dressed in a fabulous royal-blue blouse with gold lace-up ties, a shimmering gold skirt, black boots, a high white collar, and a bright red bow in her hair, all compliments of costume designer Gregory Hiatt. Kurtenbach looked beautiful as she sarcastically spouted off, “Do I look like I need to wait for a prince?!” As Cinderella, Erica Lee Bigelow was elegant and powerful at the same time, and absolutely hysterical in her performance of “All I Want to Do Is Eat.”

Sydney Dexter played multiple roles as Beauty & the Beast's Belle, The Little Mermaid's Ariel, and Rapunzel and was equally funny as each of them, with the half-crazy Belle's “Have you met my candelabra?” a pointed reference to the kindhearted Lumiére. She also lamented that the fairytale's chipped cup Chip Potts never shuts up. 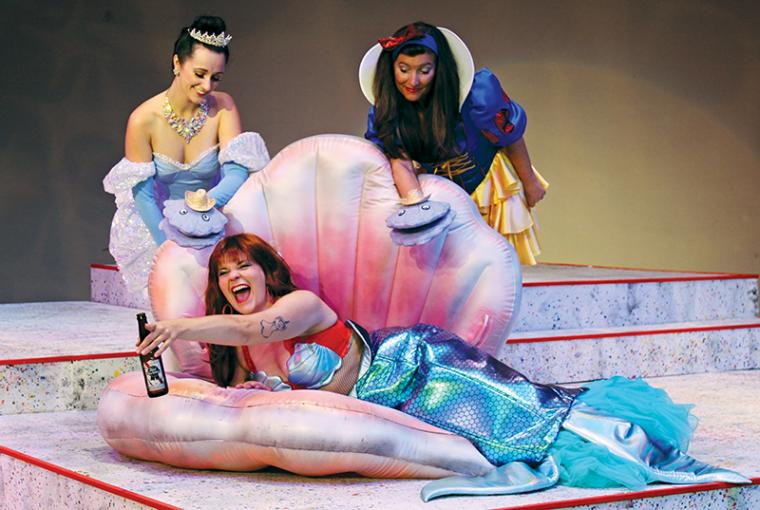 Tammie Harris portrayed the Princess Who Kissed the Frog, and she was decked out in this cool white ballroom gown with what looked like green lily pads attached. Harris later changed into a shorter dress with bright green, sparkly lily pads as well, and the performer had a voice that knocked your socks off, delivering all kinds of riffs and runs that blew me away.

Quinn Mei Lysaght, whose comedic timing was fantastic, also played multiple roles as Mulan, Pocahontas, and Aladdin's Badroulbadour, and received a lot of laughs from Friday's crowd. In one highly creative sequence, Lysaght was seen flying on a magic carpet, and the carpet itself appeared to be designed like a costume, attached fake legs and all. And then, among the Disenchanted! ensemble, there was the Sleeping Beauty portrayed by Shelley Walljasper, a performer who has always been amusing in everything I've seen her in.

Susie Holgersson's scenic design was amazing, boasting a bright-red curtain accented by gold tassel ties; a multilevel platform that looked to be made of marble; and red benches strategically positioned throughout. The red-hued lighting effects by designer Heather Hauskins complimented everything and helped bring the story to life, and there was also a projection screen behind the set that showed scenes of a castle, animals in the woods, and the famous fireworks we often see before the Disney movies. 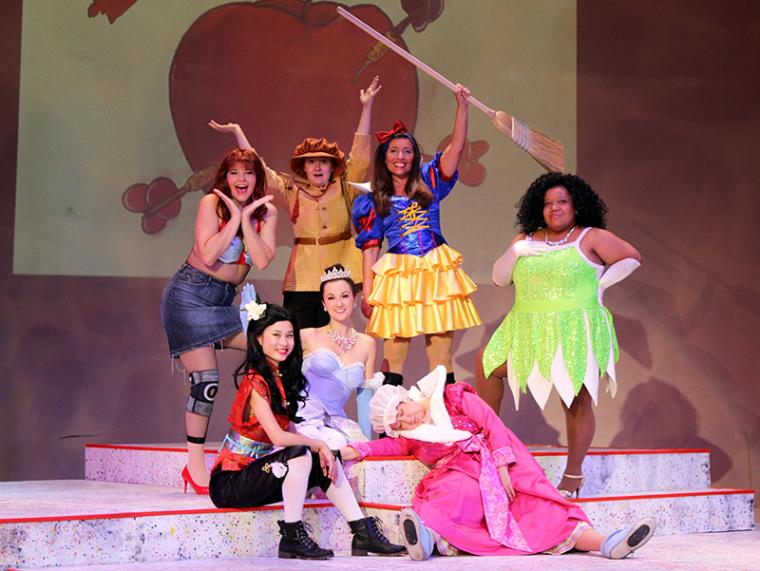 Another nice touch was an animated bluebird that Snow White held in her hand as sound designer Sam Ramont made the little birdie chirp away. All the colors in Disenchanted! were vibrant and reminded me of being in Disney World as a youngster – but as stated earlier, this show may not be appropriate for the kiddos. Nonetheless, it is a great musical for adults, and judging by the laughter and applause throughout the opening-night performance, I would say everyone thoroughly enjoyed the evening.

Meanwhile, the show's message was a positive one, in that it was empowering to women and also pointed out how they often feel like second-class citizens expected to merely clean and wait on others. There was a wonderful song titled “Perfect,” led by Walljasper, that reminded “the fairer sex” that it's okay to accept yourself for who you are, imperfections and all, and explained that the princesses just wanted to be heard and seen – without being stereotyped – as strong and influential women. Yes, it's nice to have a Prince Charming. But even if he never comes along, these characters, we understand, will make it on their own by supporting each other.

Circa 21’s production of Disenchanted! was a hilarious take on the imagined behind-the-scenes happenings of the most famous princesses that many of us grew up with, and the show is presented with less fantasy and more reality as it pertains to real-life challenges faced by everyday women. This cast is one of the most talented groups of women I have ever seen grace a stage together, and they completely pull off this impressive, not-so-typical tale involving the famous Walt Disney princess stories.

Disenchanted! runs at the Circa '21 Dinner Playhouse (1828 Third Avenue, Rock Island IL) through November 6, and more information and tickets are available by calling (309)786-7733 extension 2 and visiting Circa21.com.