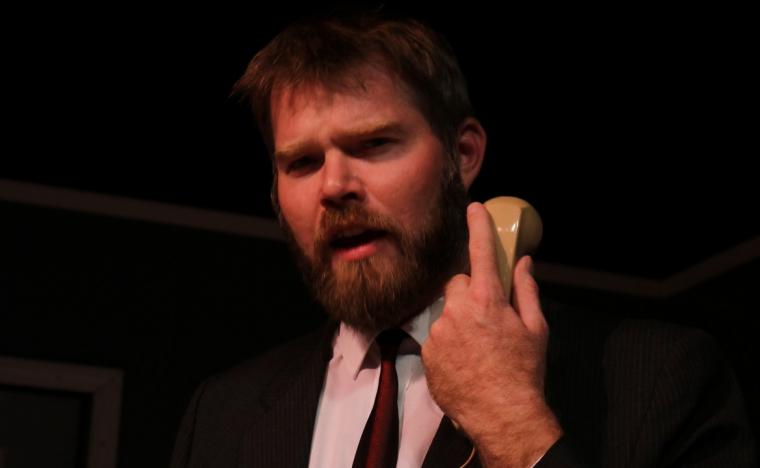 Dave Moreland in “Prescription: Murder" at the Playcrafters Barn Theatre -- November 8 through 17. (Photo by Jesse Mohr.)

A delightfully engaging stage mystery whose film version introduced the world to the iconic detective Lt. Columbo, authors William Link's and Richard L. Levinson's Prescription: Murder wraps up the Playcrafters Barn Theatre's 2019 season with its November 8 through 17 run, this “arresting” comic thriller sure to prove why British Theatre Guide raved, “For fans of Columbo, and of detective stories in general, this is certainly worth seeing.”

Providing the inspiration for the Emmy-winning TV series that spanned numerous decades and made a star of Peter Falk, Columbo's theatrical predecessor Prescription: Murder tells the tale of a brilliant psychiatrist and his mistress who hatch a plot to murder the man's neurotic, possessive wife. The execution of their plan and the creation of their perfect alibi depend on a bizarre impersonation, and the stage mystery finds Lt. Columbo consequently engaging the psychiatrist in a duel of wits. But when the doctor succeeds in having Columbo removed from the case … .

What follows is an exciting and fascinating game of cat-and-mouse written by longtime collaborators Link and Levinson, who received a Special Edgar Award (named after Edgar Allan Poe) from the Mystery Writers of America for their work on TV's Ellery Queen and Columbo. During the 1980s, they were also three-time winners of the Edgar for Best TV Feature or MiniSeries Teleplay, and in November 1995, they were jointly elected to the Television Academy Hall of Fame.

Directing Prescription: Murder for Playcrafters is Eric Teeter, a frequent sound designer for the Moline theatre who has also appeared in such productions as Something Intangible, Clybourne Park, and Avenue Q. Columbo is portrayed by Alexander Richardson, the founder of the theatre's Barn Owl Series who wrote and directed this year's (a work in progress) and has acted in such productions as Some Girl(s) and Fat Pig. And completing the ensemble are Nolan Schoenle in his acting debut for Playcrafters plus five venue veterans: Adam Cerny (4000 Miles), Kassidy Holdridge (She Kills Monsters), Dave Moreland (a work in progress), Yvonne Siddique (And Then There Were None), and Elle Winchester (Five Women Wearing the Same Dress).

Prescription: Murder runs November 8 through 17 at the Playcrafters Barn Theatre, with performances at 7:30 p.m. on Fridays and Saturdays and 3 p.m. on Sundays. Admission is $7-13, and more information and tickets are available by calling (309)762-0330 or visiting Playcrafters.com.