Pulitzer Prize: “Newsies: The Musical,” at the Timber Lake Playhouse through September 22 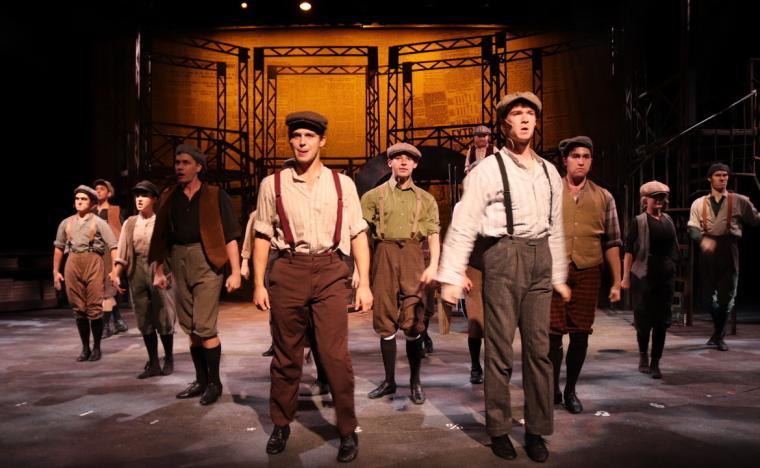 I always like rooting for the underdog, and Saturday’s matinée performance of Disney’s Newsies: The Musical at the Timber Lake Playhouse is a David-versus-Goliath story full of vibrant and energetic dancing, coupled with excellent singing, as the cast of 27 took on this delightful Broadway smash. I especially enjoyed the scenic design by David Goldstein – an expanded set of rusty steel bars that were constructed into high platforms and stairs, reminding me of Elvis Presley's Jailhouse Rock set.

With its music by Alan Menken, lyrics by Jack Feldman, and book by Harvey Fierstein, Newsies was the recipient of Tony Awards for Best Choreography and Original Score, and its opening scene at Timber Lake found men's shirts and trousers hanging on a line and, as the cast began to sing and dance, eventually taken down, which was visually impactful. The venue's rotating stage is always a treat and, coupled with the great lighting by Dan Danielowski, added so much to this production. The dancers, meanwhile, are incredible while jumping and swinging back and forth from a moving stage to a non-moving one, and the outstanding music direction by Paul Marzalkowski was continually apparent, as everything really flowed.

Newsies' action takes place in 1899 as young paperboy Jack Kelly (Sawyer Pollock) heads up a strike against his nemesis Joseph Pulitzer (John B. Boss), the publisher of the New York World and one of the show's two main antagonists. Our so-called gutter-rat newsies consequently want to gain respect and equality in big city New York, but while Pollock nailed his New Yorker accent and his vocals were stellar, in my opinion he lacked a certain charisma, leaving me emotionally flat.

Jack’s best friend nicknamed Crutchie (Andrew Leonforte) has a bum leg, and together, their motley crew sell copies of the New York World to support themselves and their families. Leonforte had a memorable moment as he sang one of my favorites, "Letter from the Refuge,” with his tender voice and humble demeanor. While slaving away on the streets, the powers-that-be that include their crooked boss Wiesel (Jeffrey Little) and his cohorts hike up the cost of the newspapers, leaving the newsies outraged. 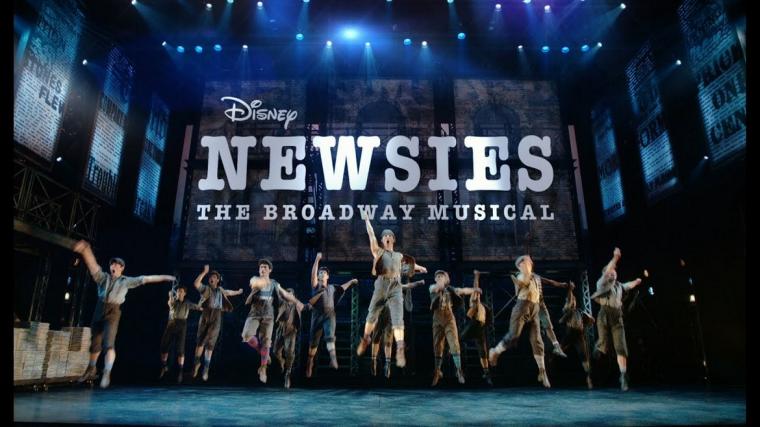 With dynamic songs such as “Santa Fe,” “Carrying the Banner,” and “Seize the Day,” there is never a dull moment in this show, and director/choreographer Vic Dimonda did a wonderful job alongside the dance captain Cody Knable to deliver a superbly precise and entertaining experience. Morgan Arrivillaga's Finch particularly stood out because she always put special twists on her dance moves. (She also portrayed the diverse roles of a nun and a Bowery Beauty.) Olivia Belfie was spunky as Jo-Jo and really blended in with all the guys in the cast while also doubling as a showgirl dancer, and rounding out the girl newsies was Bella Rusli as Buttons – herself also a nun and Bowery Beauty, and a most charming one.

Rachel Davenport was phenomenal as Medda Larkin, the opulent, vaudeville-style theatre owner who hides the boys in her theatre, and her rendition of “That’s Rich” blew me away; she was a particularly consummate performer when decked out in a fabulously fierce red gown with all the fancy trimmings, the show's costumes courtesy of designers Tammy Long and Terrie Miller (the latter of whom designed Medda's gown). At one point in the show, Jack spots the young female reporter Katherine Plumber (Becca Brunelle) and the two strike up a romance, and Brunelle made singing, dancing, and acting look easy by effortlessly and gracefully gliding across the stage with fast paced songs such as “Watch What Happens,” exuding both energy and talent.

Dylan Goike won me over as Davey, the spokesman for the newsies, as his confidence continually built throughout the show; Goike made his character truly inspiring and believable as he peered into the audience with determination and steadfastness in hopes of overcoming adversity and seeing justice served. And portraying Davey’s little brother Les, Anthony Selmi won the Cute-Factor Award, though at times he did run his lines together too quickly, making him hard to understand.

Timber Lake’s Newsies: The Musical was entertaining, energetic, and exciting, with gymnastics intertwined into the choreography, a set that was beautiful, and well-fitted costumes adding that undeniable polish – the cherry on top – for the venue's season-ending the show. I, for one, was exhausted just watching this cast tumble about and move with such quickness and agility, and the storyline was truly inspirational – a reminder that with a little bit of courage, faith, and boldness, we can indeed slay our giants.

Newsies: The Musical runs at the Timber Lake Playhouse (8215 Black Oak Road, Mt. Carroll) through September 22, and more information and tickets are available by calling (815)244-2035 or visiting TimberLakePlayhouse.org.